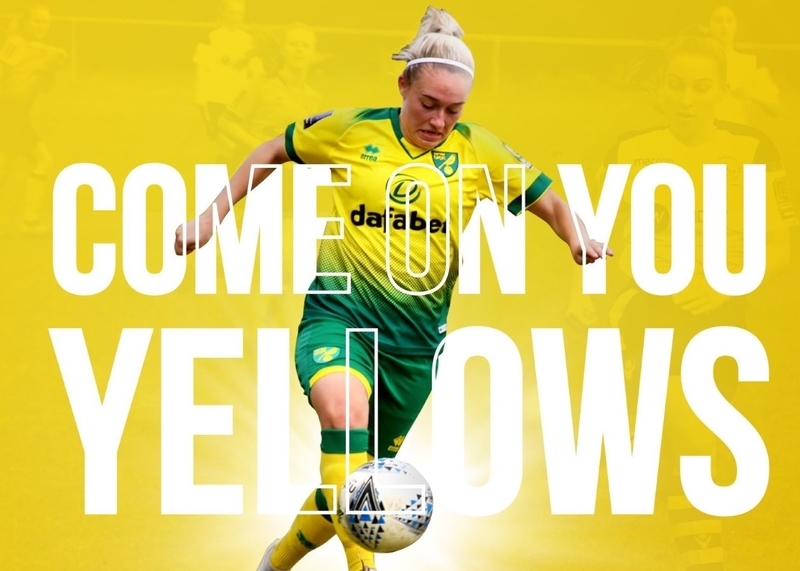 Tomorrow night, it’s the second Old Farm derby of season, with the City ladies still bruised from the 4-1 defeat they suffered in Suffolk back in September. Time to put that one right. So, ahead of the game, I’ve been chatting with the club’s chair, Louise Riseborough, who’s updated us on developments off the field and progress on it.

Hi Louise. You’re currently chair of Norwich City Women, but as I understand it, your links to the club go way back. Care to give us chapter and verse on your various roles at the club?

Most people will tell you they got involved with a football club because of their children, I’m no different! It was about 11 years ago when my eldest daughter began playing for the U10’s and my middle daughter followed a couple of years later. I would often spend my Saturday mornings on the side-lines cheering the girls on. I stepped in to help with running the line most weeks and the odd occasion refereed a game. I offered to help out with coaching the U15’s, my eldest’s team at the time and the club paid for me to complete my level one football coaching badge (I think I have repaid my debt on that one!)

I was asked to join the committee as their fundraising officer which didn’t last very long, by the time the next meeting came along I had agreed to take on the club secretary position, a role which I stayed in for 7 years until stepping us a Chair.

How, from your perspective, has the team and the club (the women’s side) developed over the last few seasons. There appears to be some real impetus developing right now – where has this come from?

We have totally restructured how the club is run. We now have a management board and development committee in place who oversees the day to day running of the club. The coaching set up consists of six qualified coaches, a qualified goalkeeping coach, a matchday analyst, match prep, an injury prevention coach, and a nutritional coach.

We are in the first year of our strategy and development plan. We never expected to see instant results and this year is all about instilling our philosophy and embedding our core values. If we continue to build strong foundations and invest in our players and coaches on and off the pitch, results will follow.

That sounds great and has a very familiar ring to it. Basing this model on anything in particular? 🙂

What, specifically, has been the driver behind the new tighter relationship with the club and the CSF? The pathway for players to progress through from the CSF to the women’s team is bearing fruit? How many of the current first-team squad took that route?

I have been working very closely with Zoe Ward (main club) and Ian Thornton from Community Sports Foundation (CSF), they have been extremely supportive of what we are trying to achieve as a club. This season the players and coaches have had their squad photo taken on the pitch, feature on a monthly basis in the matchday programme, and a page on the official Canaries’ website. Not forgetting to mention that The Nest will soon be home to us once building work is completed.

How awesome will that be. A Norwich City team playing at The (new) Nest sounds just perfect.

We are also seeing players progress from the Female Football and Education programme at the CSF to our first and reserve team, one of them scored in the semi-final of the Norfolk Women’s Cup at the weekend! A number of our senior players also went through the CSF Girls Academy, as it was previously called, and are instrumental in guiding our younger players. There is a real buzz around the club right now and morale is high. This is the best it has been, well certainly in my time at the club.

Concentrating on the ‘root rather than the fruit’ is definitely the theme of the day in these parts… what’s not to love. And it’s great to hear there is a real buzz about the place.

The team is currently mid-table in the FA Women’s National League South East Division 1. How does this compare with expectations at the start of the season?

Our focus this season was to consolidate on the pitch whilst we restructured off it, the longevity of the club was the motivation behind both these aspects. The coaching team set what they deemed realistic targets for the season, and I am pleased to say they are on course to achieve these. They will be the first to admit the points tally could and should be greater but that also works as inspiration for the second half of the season in the quest for points to climb up the table.

So, the second derby of the campaign is almost upon us. Can we put one over them and make up for the defeat earlier in the season? Potentially not a bad time to play them after their highs and lows of the weekend.

The derby game is always a game that players look forward to and this time is no different. Players and coaches alike have been working exceptionally hard with the intention of putting in a performance they, the club and our supporters can be proud of.

However, this is a results-based sport and I am sure they would all accept a reduced performance if that meant coming out on top at full time. We are only too aware the reverse fixture didn’t go our way and after doing the ‘double’ over them last season, it would great to return to winning ways in the derby.

Thanks to Louise for her time and the best of luck to the ladies! Details of where and when below, and note… free entry to City season ticket holders.