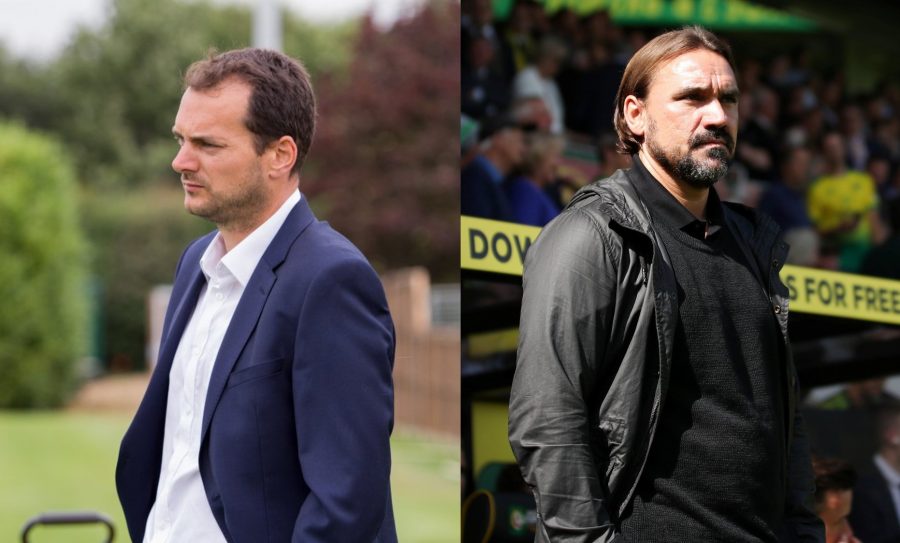 I’m taking as read that most of us like Stuart Webber and Daniel Farke, and want them to be motivated to stay and keep working for Norwich City.

No need to re-hash the detailed reasons why. Suffice to remind ourselves that they inherited a huge challenge: a team that had to be rebuilt virtually from scratch while saving eye-watering amounts of money.

While tackling that challenge, they had to accept frustrating legacy issues – not least that up to last summer, the club’s biggest earners continued to be Matt Jarvis and Steven Naismith.

Last season was a miracle. Though this season’s results have been disappointing, we understand the financial disadvantage we’ve been at, exacerbated by injuries. Only a stony-hearted fan would fail to enjoy much of the football and character we’ve seen on the pitch.

Listening to Stuart Webber, there can’t be many who aren’t glad he’s with our club.

When I wrote earlier about the past two-and-a-half years, there were recurring concerns in some of the responses. Webber and Farke must have been conned; the financial constraints were clearly worse than they knew; surely those constraints would leave Farke fed up and seeking to move; Webber’s contract expires in 2021 and he’s surely holding back his best discoveries for his next job.

The first two can be nailed: both Webber and Farke have been at pains to say they went into their jobs at NCFC with their eyes open. No-one misled them about the challenges or the constraints.

As to their current motivation, I think the past week has given us some good news and reassurance.

Stuart Webber’s EDP/Pink Un interview this week reveals a man entirely committed to his job. He talks about the last two transfer windows, including his regrets about two of the summer acquisitions and his greater satisfaction with the window just completed.

Above all, he’s still talking about balancing the short term with the medium-term and beyond. In his words: “It’s never just about today. We have to think about tomorrow, and the day after.”

He’s pleased with getting Lukas Rupp and Ondrej Duda for the short term – but sounds, if anything, more excited about signing two outstanding nineteen-year-olds, Melvin Sitti and Sam McCallum, for Norwich City’s future.

Meanwhile, Daniel Farke’s basic message is “I’m here as long as you want me”. This week, in response to rumoured interest from leading German clubs, he reiterated that he’s never walked out on a contract.

Better than that, his other comments reveal a commitment to Norwich that goes well beyond the duty of a contract. He points out that, even if we’re relegated this time, last season’s promotion has significantly changed the club’s position for the better: we’ve wiped out the legacy obligations that were a millstone round our necks and made what he sees as vital investment in infrastructure.

He and Stuart Webber will have a far stronger hand in transfer dealings than two years ago when “we were desperate for money”.

Farke loves his relationship with the fans and the unstinting support of the Board. For those of us who love him and his style, it’s heartening to hear his summary:

“I feel exactly in the right place”.

A friend said to me this morning how remarkable it was that, despite our league position, “we’re all in perky mood, with no-one calling for the manager’s removal”. Of course, it’s not all sweetness and light, but he’s right. It’s a distinctly different mood from the increasing toxicity around some other clubs in the relegation mix (of which there are at least six, by the way).

The positivity emanates not just from the management team, but also from the players. The Canaries Trust AGM on March 18 has taken on a new level of attraction with news that the main guest will be Tim Krul. Who knew, after his shaky start last season, that he’d become the folk hero that he has?

Tim exemplifies the approach and philosophy of Stuart and Daniel. He’s a quality player, but it required us to take a risk after the injuries that left him well off the radar (and made him affordable for us, of course). Not only has he regained the confidence and form that brought him to early prominence, he’s grateful to Norwich for giving him the chance.

Like Grant Hanley, he doesn’t feel the club owes him anything – it’s the other way round.

Tim is also a convert to the Webber/Farke way of doing things – and to City’s prospects under their regime. Whatever the outcome of this season, he’s clear:

“This club is going places”

Leave a Reply to Inside Right Cancel reply