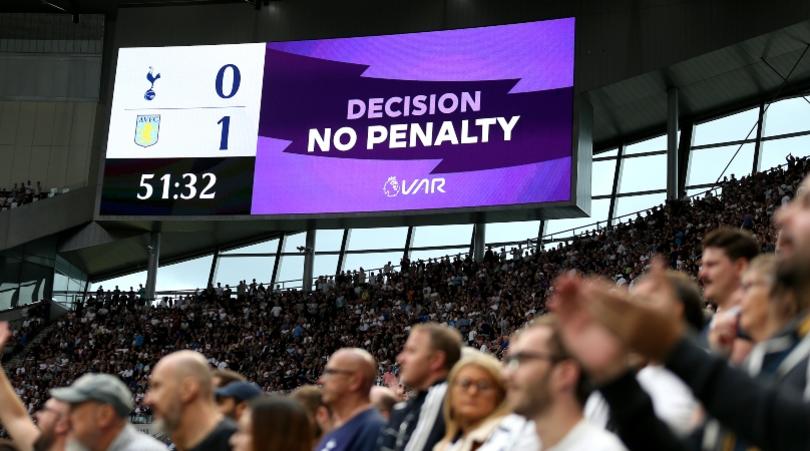 He’s a likeable, obviously well-educated and erudite youngish Premier League manager in his forties. His fans idolise him even when things go wrong for the team and their supporters. As they often do, seemingly ever-increasingly in the second half of this season.

And did I feel sorry for him at the weekend? Yes I did, I really did. Because of the monstrous regiment of VAR. I’ve never seen anything quite like this in my life and never wish to again.

Yes Eddie Howe I feel for you. Not only did Bournemouth have a perfectly good Josh King goal struck out against Burnley but everyone’s favourite Stockley Park “celebrity” Mike Dean was ordered to bring everything back for a Burnley penalty converted by Jay Rodriguez. Fair play to Mr Dean in a way – he wasn’t the Politburo monitor on this occasion.

What, in the name of any deity you might for some strange reason believe in, allowed this to happen?

I’m no Bournemouth fan – when it comes to their history, infrastructure and ownership I do kind of wonder what they are doing in aforementioned Premier League anyway.

But c’mon, where’s the justice in that?

With my cards on the table, I don’t have much time for Man Citeh either.

I’m quite ambivalent about Brendan Rodgers to be honest. I liked him at Celtic and he’s always managed to keep the ship steady at Leicester. Very steady in all honesty.

You’ll all know the incidents in that match I’m referring to as in the “collision” between City keeper Ederson and Leicester’s Kelechi Iheanacho [with no interference from VAR] and the handball that wasn’t from Foxes defender Dennis Praet. How do you dodge a thunderba$tard like that while retaining your teeth fer Chrissakes?

It’s the instinct of self-preservation. I recently had all my teeth out under general anaesthetic but my reaction would have been just the same as that of Praet. Ridiculous, although Kasper Schmeichel saved the resulting weak pen from Sergio Aguero and justice was served.

Then there was the Kevin De Bruyne “handball”.

“I don’t think VAR is the problem, it’s the interpretation. There’s a lot to improve.”

Pep Guardiola [relieved at least about the result] contributed: “I have found some of the recent decisions made by VAR weird“.

But it is looking increasingly unlikely that VAR will be of any concern to Norwich City Football Club next season. That seems a bit quirky in itself as ourselves and probably Watford and Villa will have all the tech in place to continue it with a rumoured £9.5k match fee, something all three relegated clubs could comfortably afford. Not so sure about the likes of Rotherham though unless Warney is a fan, which I doubt.

Personally I hope NCFC rips the lot out and if they do I’ll take it to Swanton Road for free. Other recycling centres are available.

Well done to all concerned with England Rugby, Tyson Fury the self-styled Gypsy King and every single person involved with Oxford United FC.

The only real belly-laugh I had on Sunday was that when Match of the Day finished I kept the TV on the Andrew Marr Show until Colin Murray and Nathan Jones popped up to do their stuff on EFL on Quest, a show I’ll be scrutinising more closely next season.

Marr, a broadcaster I like, actually said and I quote: “Everyone loves a British beaver“. Jesus. And I don’t mean Citeh’s Gabriel.

Oh, by the way, I do realise that we lost 0-3 at Wolves on Sunday afternoon. I just have nothing pertinent to say on the topic beyond the fact that we have 18 points after 27 matches.