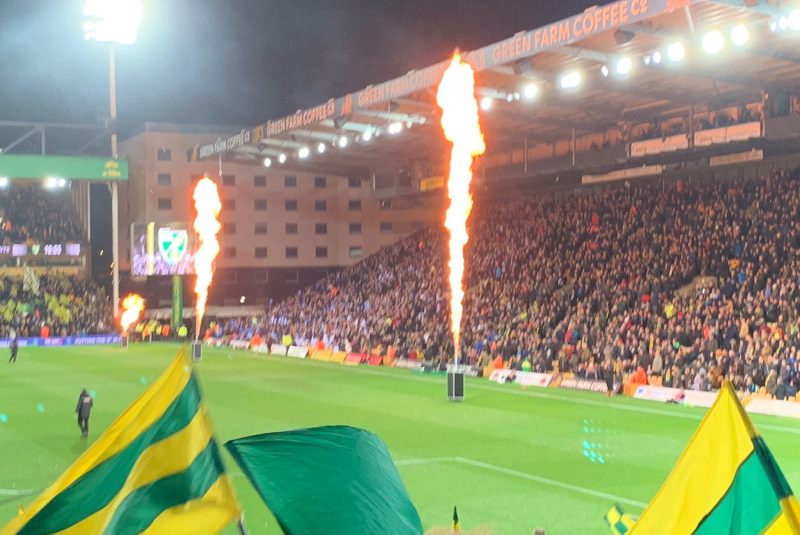 Wow, who saw that coming?

We all expected a response to the no-show at Molineux but such was the lack of City belief in deepest darkest Black Country, it felt a bit of a stretch to see that response yielding three points.

But one swoosh of Jamal Lewis’ left boot and some jiggery-pokery from the sticklers of Stockley Park, and City were celebrating only their second Premier League win of 2020.

And what a relief.

The guttural roar that greeted that final blast of Craig Pawson’s whistle told the story. If they’re going to go down, we want them to go down fighting, not waving white flags, and that’s what we got last night.

And, of course, who knows what can happen if that one win can turn into a couple and, for the first time this season, we find ourselves with that scarce commodity called momentum.

But that’s for another day, and there’ll be no three-word tropes from me that begin with The and end in Escape. Nor will there be images of Steve McQueen astride a motorcycle, staring wistfully at a large, barbed wire fence. A lesson learned.

Instead, I’ll be savoring the win for what it was: gutsy, defiant and bold.

That Jamal Lewis emerged the hero added a dash of surreality to the evening but, having endured a tricky season and a subsequent dip in confidence, that goal could be just what he needs to find his top level for the run-in. And for inspiration, he only has to look fifty metres to his right to his mate ripping it up down the right flank.

Not for the first time, the evening threatened to turn into the Max Aarons show, with for long spells our right-back operating more as a winger than a defender.

Not until I had chatted to a Leicester fan this week for the MFW match preview had I sussed that Ben Chilwell isn’t universally loved by the King Power faithful. Questions remain around his ability to defend one-on-one apparently, and so it was no surprise that Team Farke had altered the shape a little to allow Max to get up close and personal with the England international.

And lo and behold. As one tweeter succinctly put it, Aarons had Chilwell on toast all night, just as he did for the goal.

Talking of which, almost lost behind Aarons whizzing past Chilwell as if he were on sand and Lewis fading that perfect strike inside Schmeichel’s post, was Ben Godfrey’s pearler of a pass to pick out Max in the first place.

Godfrey has not had the easiest of seasons and one or two brows have been furrowed at his defending at times (as they were again last night), but there’s a very good player in there, one who is still learning, but who can also ping a pass onto a sixpence if needed.

I’m sure the fact three of our brightest young things combined for the goal won’t have been lost on numerous heads of recruitment across the country but, equally, they can all feel free to s0d off, at least for a couple of seasons.

We can’t, of course, ignore the fact that but for the intervention of VAR we would most probably be mulling over another narrow defeat this morning, but how lovely was it that just for once we came out on the plus side. Leicester will no doubt feel aggrieved as we would do (and have done) in the same circumstances. But… who cares. We’ll take it.

It’ll have been a relieved Ben Godfrey who watched Pawson eventually reverse his decision and award a free-kick after another interminable wait for the white smoke of Stockley Park. To have let that ball bounce and then get the wrong side of Iheanacho was an error; all part of the aforementioned learning curve.

But it did seem to galvanize City. The surge of adrenalin trigged by that lifeline can’t be underestimated and that sense of back-from-the-dead felt in the stands must have been ten-fold in the hearts and minds of the players. And for Leicester, not in the finest of fettle, it must have felt like a full-on whack in the cojones.

The Foxes will argue they should have been ahead at half-time, and there were spells when it was by the seat of the pants stuff as Barnes and Maddison probed and Perez and Iheanacho misfired, but rarely was Tim Krul left unguarded. He did what he had to do with the minimum of fuss and, as a defensive unit, City looked ever more assured as the minutes ticked by.

That Krul didn’t have a save worthy of the name to make once City had edged themselves ahead speaks volumes for those in front of him – including one Emi Buendia who took his defensive responsibilities very seriously; like one who was proving to his coach that he has been listening.

He also, along with Ondrej Duda, formed City’s creative hub in that stirring second half. Both were prominent as the Canaries turned the screw.

So, three points. Three beautiful points even if the football that earned them couldn’t always be labelled as such. For weeks now, we’ve been saying that we’d give anything for a battling 1-0 that didn’t necessarily come with all the bells and whistles. And that’s what we got.

Now bring on the Spurs.