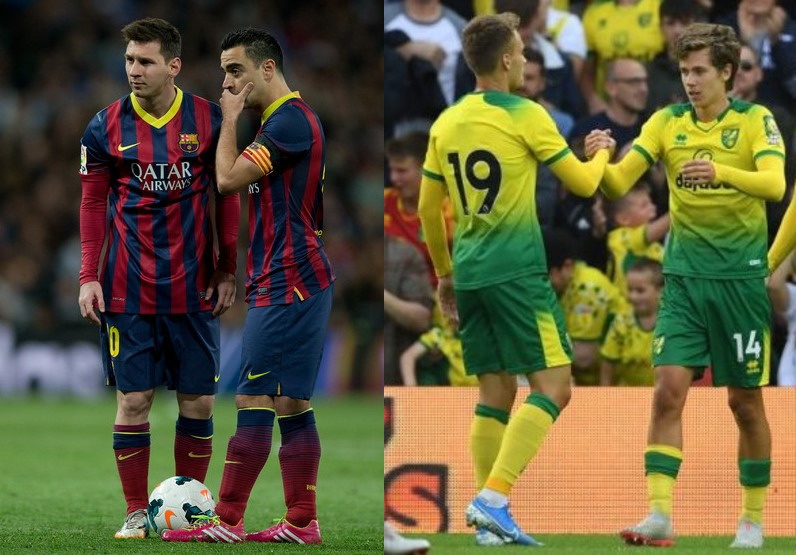 Remember back in the day when MyFootballWriter regularly had writing from proper football hacks, like the Micks and the Ricks? Even then, the ‘…icks’ was part-used (by Wrath of the Barclay, mainly) as rhyming slang for a group of MFW writers. Nowadays that collective noun is mainly the preserve of Facebook when describing the MFW team 🙂

Among said group of MFW Founding Fathers was another writer extraordinaire to whom I have turned for today’s ‘From the Archive’ classic.

I give you Mr. Kevin Baldwin, who was writing on the eve of the Carrow Road local derby of 2015. Enjoy…

I found myself in Barcelona last week.

Sorry, when I say I ‘found myself’, I don’t mean that I belatedly acquired true self-knowledge or spiritual enlightenment; I just went there on a half-term break with the family.

Of course, you can’t go to Barcelona without paying a visit to that monumental place of worship which ascends giddily towards the heavens; where wild flights of imagination are made real; whose construction will finally be completed in the next few years.

And if you’re wondering whether I’m referring to the Sagrada Familia or the Camp Nou, the answer’s yes.

It’s impossible not to connect the two, especially when you visit both on the same day.  In fact, the club – and in particular, the way the team plays – seems to embody the style and spirit of the whole city.

(I hate to use the word, since it always makes me think of David Brent doing that finger-interlocking gesture, but there is a real synergy there.)

If anything, it’s another of Antoni Gaudi’s buildings in the city – La Pedrera – which resonates most with the artistry displayed on the pitch.

In both, there’s a sense of flow and movement, of air and light.  Everywhere, you notice subtle intricacies and clever angles.  And above all, both are a perfect combination of form and function, of art and practicality.  You feel that Gaudi and Messi are similar artists working in different mediums.

All terribly pretentious, I know.  But I can’t help thinking that Barça’s playing style is so right for them and works so well because it feels so closely linked to the local culture.

(Oh, I know they don’t play well every week; last weekend they lost at home to Malaga.  But the Catalans have that covered too, in the image of El Caganer, the defecating figure who appears in local nativity scenes and, rather off-puttingly, outside a number of Barcelona shops.)

This connection is an aspect of Barça’s self-description as Més que un club (‘More than a club’).  They see themselves as a symbol of, and an ambassador for, Catalan society as a whole, and they clearly derive great strength from that.

Anyway, I got to thinking (since it’s hard to sleep when you’ve booked a hotel room overlooking Barcelona’s biggest and constantly-busy thoroughfare)… can Norwich possibly be described as ‘more than a club’?  And can any connection be made between our playing style and the local character and architecture?

For all the club’s laudable community work, City clearly doesn’t play the broader role in society that Barça does.  It doesn’t represent a people subjected for years to outside persecution, unless you count all the ‘six-fingered’ jibes we have to put up with.

But to those of us living outside Norfolk, it is more than a club.  It’s a connection with our roots, an expression of our local identity.

It may well be a self-selecting group, but I don’t think I’ve ever met anyone from Norfolk (when away from the county, that is) who doesn’t follow the club’s fortunes.

It’s a trickier job, though, to draw parallels between City’s playing style and the character of the city.  (Or indeed, of the county.)  Do we have a definable playing style?  How do we define our local character?

People talk about playing ‘the Norwich way’, but I suspect everyone has their own idea about what this means.  To me, it’s not so much a style as an attitude; City have always been at their best when they play with heart, with grit, and aren’t cowed by the reputation of their opponents.  (Funnily enough, this has been inspired most often by people with no previous connection to the club or the area.)

I think it’s fair to say that it’s part of the Norfolk character not to be easily impressed by reputations.  People from outside may misinterpret this as coldness or suspicion, but it’s more a case of us wanting to make our own minds up in our own time.  Just because someone or something is big elsewhere, it doesn’t mean we’re going to think much of it.

(This could be why Chris Hughton’s constant deference to the opposition felt so instinctively wrong.)

The team colours can be seen as a reflection of Norfolk’s ‘do different’ attitude, I suppose.  Well, no other team in the top four divisions has them.

But on the negative side, it’s also been said that Norwich is the graveyard of ambition; a trait too often mirrored by a ‘Costa del Colney’ atmosphere at the training ground…

It’s harder still to identify a building in Norwich which can be compared to the team.

The cathedral is perhaps too grand and imposing, though there’s something about its graphic representation in the Aviva logo on the front of the team shirts which suggests a gradually-rising graph line punctuated by a sharp peak.

The castle is perhaps too solid-looking; there’s always been a certain fragility in even the best City teams, as exemplified by the 1992/93 vintage which finished third in the league with a negative goal difference.

Nor can I see anything in the Forum, though while we’re on the subject I always thought that the old Central Library which preceded it was an apt symbol of the Norfolk character: a flinty exterior, with inward-facing windows, but with a lot more thinking going on in the interior than people on the outside would realise.  (I’m not sure whether the large glass façade of the Forum is meant to connote a new, more open outlook or whether it’s just to give Pizza Express customers a big window to look out of.)

Maybe the local institution which best reflects the team isn’t a building but the Norwich to London rail service.  Endless tinkering over the years; not the finest rolling stock but still serviceable; prone to unexpected setbacks and service suspensions just when you think everything’s running smoothly again.

Here’s hoping the team doesn’t suffer one of those setbacks on Sunday.  (It’s too late to wish the same for the rail service; there’s yet another bus replacement in operation.)

Because of all the home games in this season’s fixture list, this is the one when we’ll be asserting our local identity the loudest.

And we did… as a Bradley Johnson thundrerb@stard and a Lewis Grabban unintentional bobbler brought Carrow Road to its feet in a 2-0 win.