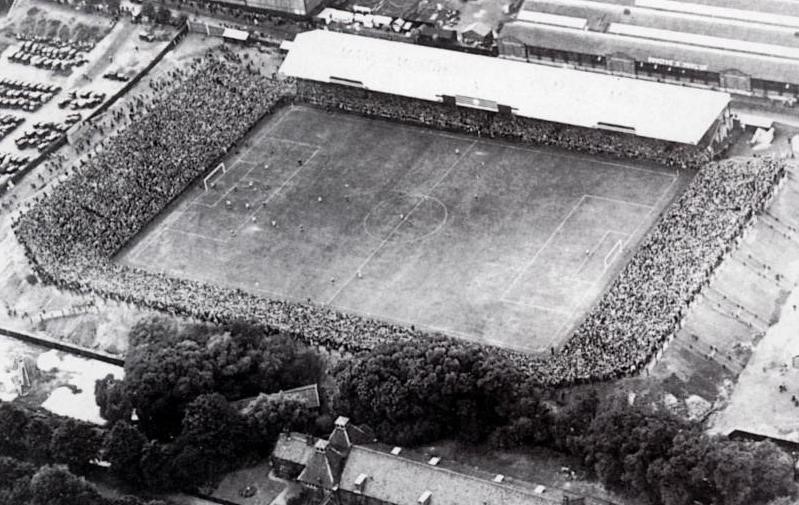 As well as being Dad’s first sight and sound of the old place – then not-so-old – it was the club’s first competitive game after the end of World War Two. The record books tell us there were 20,677 others in the ground that afternoon other than my dad. Like most of them, he was hooked.

It took just 90 minutes. Love at first sight. And 74 years on, that love has not abated one iota.

But why harp on about an event that occurred nearly three-quarters of a century ago?

Well, because over seven decades on from said awakening, COVID-19 looks like it may have prematurely ended what Dad had decided would be his final season as a Carrow Road regular. A love story 74 years in the making looks like it drew to a close when he left that green plastic seat and departed the ground at the end of the 1-0 win vs Bournemouth.

As usual, that moment came around the 88-minute mark (to avoid the “bedlam” of the departing masses) but, unfortunately, there was no final glance pitchward before he moved carefully and deliberately down those River End steps.

If only he’d known.

To most, there would have been nothing remarkable about the sight of a little grey-haired man slowly making his way to the exit a couple of minutes early. But I can still picture it.

If only I’d known.

I’m lucky. I’ve been blessed with a brilliant dad. The best. And among all the good things we have shared, no bond has been stronger and more unshakeable than the one we share for Norwich City FC, and that will endure.

But it’ll never again be quite the same. Not quite. Not without him sitting to my left for home games.

It’s with still-misty eyes he tells the tale of that first Carrow Road visit, accompanied by his own dad, Walter, his older brother Fred, and another Fred, his uncle – aka the driver.

Football afternoons that followed tended to be just him and Walter and followed a routine: catch the Halesworth to Norwich bus in the morning, go the old cattle market, watch and listen as Walter (a farm steward) traded to his heart’s content, and then to Vellore Bros for fish and chips for lunch. It was then, finally, with hope in their hearts and battered plaice in their stomachs that they headed down to Carrow Road.

He recalls the smell of cigar smoke lingering in the air as crowds congregated behind the old Main Stand with Boulton & Paul as the backdrop. Those very same sights and smells would stir my own senses in the exact same way, in the exact place some 26 years later.

He and my grandad would stand in a narrow, sunken standing area at the front of the Main Stand known as the ‘Chicken Run’ – a reference carried over from the days of The Nest – where the below-pitch-level setting made the players appears giants to an eleven-year-old. All except one – a very slight but jet-heeled winger by the name of Terry Ryder, who was one of Dad’s first Norwich City heroes.

“He would run and run… his shirt would be drenched in sweat”.

Dad’s Carrow Road odyssey was interrupted in the 1950s and early-to-mid 1960s when, like me 30 years down the track, he played rather than watched. (Here he is in all his Halesworth Town glory…)

By the time I’d arrived in the mid-1960s, the Chicken Run was no more. Sadly neither was Grandad. Walter was, of course, irreplaceable but the Chicken Run was and instead of a standing area, wooden benches – adorned with a cushion if you were lucky – offered a ringside view of the action.

It’s a tale I’ve told before, so apologies if this feels like an ITV2 repeat, but it was when I was in the early years of primary school that Dad took me to my first few games, initially, by way of a trial run, to some reserve team games.

Along with the rest of the world, football was very different back then, and in order to get our place at the very front of the South Stand, level with the edge of the penalty area, Dad deemed it necessary to get in the ground before it opened, which I think was 1:30 pm. It meant we arrived at the ground at around the same time as the players, giving Gowers Junior the chance to collect some autographs from his new heroes.

The very first one in the autograph book? None other than Big Dunc who, of course, was the absolute gentleman. To this very day, I can recall that booming voice and him referring to Dad as ‘Sir’.

We were invariably among the first in, and the sight of an empty stadium that I knew would be jam-packed within an hour, was a source of great fascination to a six-year-old simpleton.

Later, Dad, a carpenter by trade, would make me the world’s only height-adjustable stool, one that would make it easier for said mini-simpleton to see over the advertising hoardings.

For a few seasons, it was there we stood; close enough to hear profanities from the pitch and see first-hand the misdemeanours of the away fans, with Dad directly behind me just in case there was a crowd surge.

He protected me then, just as he does to this very day.

The introduction of those infamous red and blue seats – apparently no green and yellow ones were available at the time – meant we had to move and there was no way he was taking me anywhere near those ‘Herberts’ in the Barclay. So to the al fresco setting of the River End we headed with, again, the edge of the penalty area as our landmark; the South Stand side, two barriers from the front to be precise.

And there we stayed, throughout its various incarnations including that odd concept known as seating, interrupted only by a time when I too was playing football on Saturday afternoons and attending midweek games with mates, including a period when home was with those Herbets in the Barclay.

When the knees, ankles and shoulder (yes, shoulder) finally called time on my own playing career, it was season ticket time, and there was no debating over where and with whom. With Dad… in the River End… and, as it transpired, behind the goal, row S.

Our first season as ST holders was the one that followed the Millenium Stadium playoff final, another we attended together, and there we have stayed through thick and thin. In our time as regular River Enders, we’ve seen five promotions, three league title wins, four (soon to be five?) relegations and have marvelled at the great and the good in yellow and green.

His decision not to renew is not one he’s taken lightly, Quite the opposite. But the macular degeneration that’s rendered him partially sighted has dimmed his enjoyment of home games. Being unable to see players’ faces well enough to name them means, in his words, it’s just “not the same anymore”, even though the BBC Radio Norfolk commentary of Chris Goreham via his earphones has been a godsend.

(He always loved Chris as a broadcaster but his City commentaries have, in Dad’s eyes, taken him into legend territory).

And that walk from Trowse to Carrow Road, via Bracondale and Kings Street, is sometimes a long one when the lungs and legs are not playing ball. He feels it’s time, and I understand… totally.

But the ol’ place will never be the same again.

He’ll not thank me for writing this – he detests a fuss (I have web pages to fill, Dad) – but I felt compelled. For me, it’s the end of an era. For him, it’s necessary but heart-wrenching.

Of course, none of us knows what the next few months will bring but even if we all make it out the other side, Carrow Road, in the medium-term, will be no place for an 85-year-old with COPD. And he knows it.