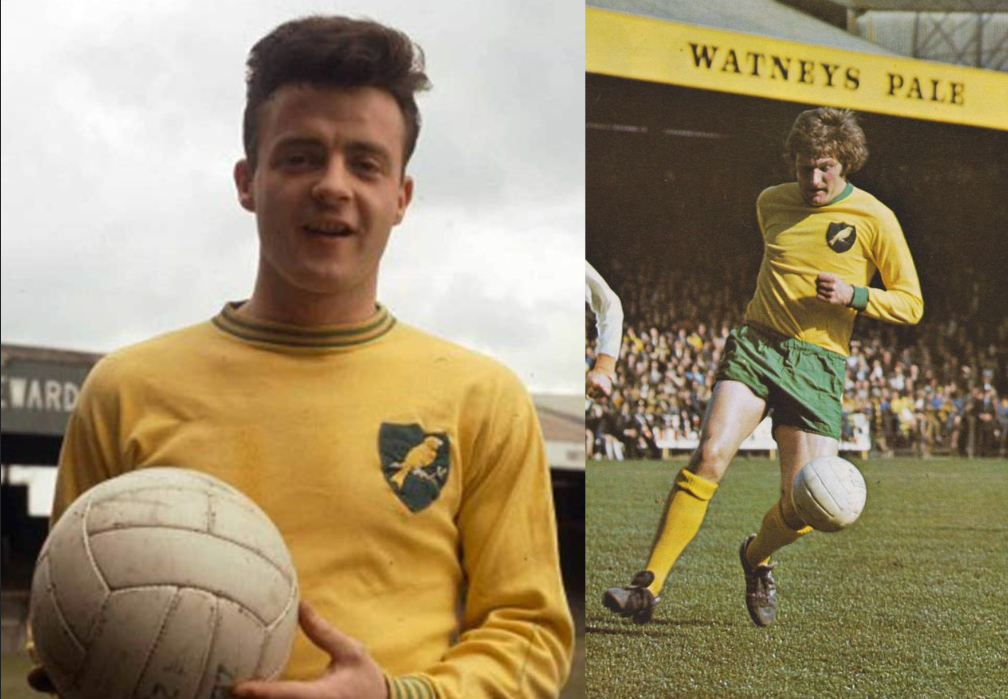 This is what happens when you’ve too much time on your hands.

Endlessly trawling through Twitter in the hope of finding some light amidst this awful darkness.

I found it in the shared experience of those naming footballers who’ve meant a lot to them. Anyone from Puskas to Pukki.

But what really inspired me to put pen to paper was the editor’s wonderfully evocative piece about his dad’s 74 years going to Carrow Road, and the sadness of realising he’d seen his last ever match there.

I’m a lightweight in comparison to Dick Gowers but it put me in mind of my 57 years watching the Canaries, mostly as a supporter but sometimes as a reporter for the EDP, Radio Norfolk and Anglia TV. And players I’ve particularly liked in that time. Not necessarily the best ones – indeed some of them would be miles away from a greatest Canary X1 – but players I’ve had a particular fondness for.

September 29th 1962 versus Derby County was my introduction to Norwich City,  the day I first clapped eyes on Tommy Bryceland. As did most of Carrow Road. It was Bryceland’s debut and for the next few years, he delighted us with his ball-playing skill. He was the sixties version of Wes Hoolahan, a wonderful player.

Mike Kenning was a diminutive, speedy winger. Think Ryan Fraser. He didn’t play that many games for Norwich and the years rather diminish my memory, although I do remember being very sad when he was transferred to Wolves.

The Canaries have been blessed with so many good goalkeepers, but for me Kevin Keelan was the finest. Wonderfully athletic and a brilliant shot-stopper, his save from Manchester United’s Lou Macari that ensured Norwich’s place In the 1973 League Cup Final was probably the best I’ve ever seen live. With film star looks, Keelan had just about everything.

Running him very closely is Bryan Gunn. Played in that golden era when City at last played European football and reached two FA Cup semi-finals, Gunn won so many admirers, not least for having to deal with the tragedy of losing his daughter Francesca to cancer. I liked him because – win or lose – he would always front up for interviews and invariably had something interesting to say.

Duncan. You don’t need a surname. You know who I’m talking about. Possibly my favourite City player. A warrior on the pitch and a joy off it. Will always have the fondest memories of Dunc with his arms in the air, bellowing to the ref he’d got it wrong after the crudest foul you’d ever seen. A marvellous character.

Alongside him, the finest example of ‘he’s one of our own’. Dave Stringer, a superb captain and a great defensive partner for Forbes. As a manager, he was in charge of an outstanding City side in the late 80s.

Jimmy Bone. A head down, bustling striker who was bought from Patrick Thistle to strengthen our promotion challenge in 1972. He obliged and electrified Carrow Road.  Bone in full flight was a wonderful sight and he’ll always be remembered for scoring our first ever goal in top-flight football.

A year later he left for Sheffield United in a swap deal involving Trevor Hockey, who made just 13 appearances for the Canaries. Long enough to play a pivotal role in us avoiding an immediate relegation. Big beard, long hair and a headband, he looked like someone from a heavy metal band. Arguably the dirtiest footballer who’s ever played for City, but I loved him.

As a young reporter, it could be intimidating travelling with the team to away games, especially as some players didn’t particularly want a member of the Press on the coach. So Mick Mcguire gets into my favourite list for being particularly friendly and welcoming. He was also a pretty decent midfield player!

Justin Fashanu was also great company. His was also a great story, a Barnardo’s boy from London fostered by a couple in rural Norfolk who went onto achieve sporting fame. I got to know Justin reasonably well; a beautifully mannered, articulate lad. A real practical joker,  who was always the first to put up his hand when it came to helping charitable causes. It still saddens me to think of how tragic his final days were.

And sadly, Jimmy Neighbour is no longer with us. He was a tricky winger who came to us from Spurs and we became pretty friendly after John Bond banned me from the training ground after I defended Neighbour in a match report following particularly harsh criticism of him by the City manager.  Once his playing days were over, I was grateful to him becoming a summariser when Radio Norfolk broadcast matches in London.

As for the player who’s made the greatest impact in my time watching the Canaries, it has to be Martin O’Neill. Twice. Firstly, arriving late in the season from Nottingham Forest and almost saving City from relegation in 1981 and then returning the following year on loan from Manchester City, and sparking an incredible late run which resulted in promotion back to the top flight. Also scorer of one of my favourite ever goals; a last-minute winner in City’s 3-2  Christmas triumph at Portman Road in 1982.

Steve Bruce’s impact was dramatic. An own goal on his City debut against Liverpool, but he recovered to become one of the most assured defenders the club has ever had. Another who never shied away from scrutiny when the going got tough, Bruce deserves legendary status for the last-minute header that beat you know en route to the Milk Cup final in 1985.

What a terrific buy Robert Fleck was. A superb finisher and loveable character who enjoyed a great rapport with the fans. After his retirement, I interviewed him at the school where he was involved in teaching children with special needs. Just as brilliant with the kids as he had been a footballer.

I  imagine Darren Huckerby would be on everyone’s favourite list. One of those players that lifted you off your seat.

I can still remember my child-like excitement at hearing news of his permanent signing on Boxing Day 2003, and his solo effort against Birmingham in 2007 is arguably my favourite ever Carrow Road goal.

Not everyone was sorry to see Jonny Howson leave Norwich. I was. To me, a Rolls Royce of a player. I loved his play-off semi-final goal at Portman Road; that sensational strike against Nottingham Forest – and rescuing the Upton Park pigeon was evidence of a good man!

Of the current squad, I’m going for Christoph Zimmermann. I’ve only met him once, when filming a pre-match press conference at Colney, but admired him for his classy manner; shaking hands with everyone in the room before delivering answers in perfect English. Also, I’ve seen his great interaction with kids. Just the sort of person I want at my football club.

Inevitably, I’ll think I should also have gone for such and Sutch! So many other possibilities, Foggo, Peters, Crook, Sutton, Bellamy, Holt. etc  But space is at a premium.

With no action to focus on. I’m sure Gary would be keen to hear about your favourites.