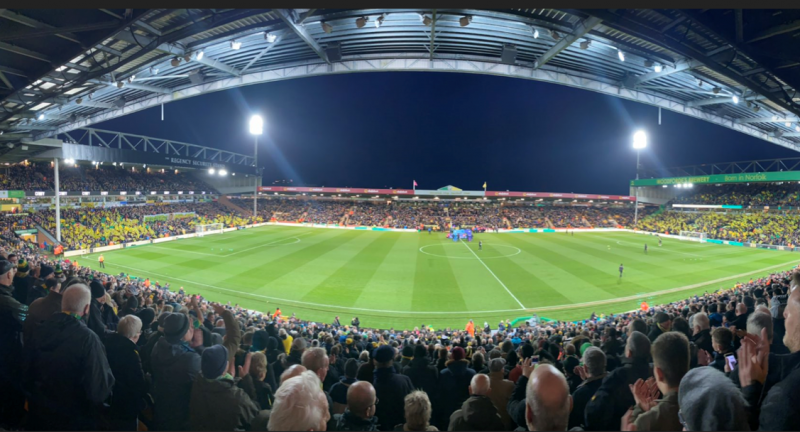 Winston Churchill once said ‘a fanatic is one who can’t change his mind and won’t change the subject’. In many respects, he could easily have been referring to supporting Norwich City Football Club.

Amid the agony and the ecstasy, the trials and tribulations, and the thrills and spills, the truth remains – we are privileged to call ourselves supporters of this storied old team who don the yellow and green.

Following City is an addiction.

While in the unforgiving world of football we watch the likes of Bury go under, Bolton Wanderers struggle and an alarming array of teams struggle to fill their stadiums or attract reasonable followings, City are so fortunately free of any such issues.

Carrow Road is always full. Matters on the pitch aside, considerable travelling contingents are a given and ‘On the Ball City’ will always remain audible from the terraces.

Under Delia and co, we go about all we do in a laudable and what is largely considered ‘correct’, way.

And under Stuart Webber’s and Daniel Farke’s stewardship, we play football in what most would perceive to be the style it should be played.

Not every fan has it so lucky. Natural comparisons are drawn between us and our Suffolk neighbours, and such judgments, I believe, are entirely valid – and revealing.

In many respects we are polarised: the ability to fill a stadium, the style of football on offer, the way the club is run and, most importantly, events on the pitch.

And what also makes following City such a unique pastime, is its continually intriguing nature, either duking it out towards the summit of the Championship or battling relegation against the nation’s elite.

We rarely endure dead rubber seasons. More often than not, a promotion or relegation is at stake. It’s constantly compelling.

And such a love affair with this club has, during this time with a regrettable paucity of football for obvious – and well-documented – reasons, evoked nostalgia.

As a 23-year-old I, compared to many probably reading this, am relatively inexperienced on my Norwich City journey, but from that day in April 2011 when the yellow army swayed like daffodils in a breeze at Portman Road to last season’s May magic in the Midlands, this club has provided me with so many wonderful memories.

And it’s at times like this when you appreciate them even more. Indeed, the stark absence of football serves to remind you why you do it all in the first place; setting those Saturday 5am alarms for a road trip or simply enjoying a pre-match pint with your mates in the Fine City before the fortnightly pilgrimage to Carrow Road.

And of course, everyone has their own ways of following City. Much has been made in recent weeks of our ability to sell 9,000 tickets to the Tottenham Hotspur Stadium but not flock in similar quantities to Goodison Park, Turf Moor or Molineux, but these debates are futile.

Work prevails for many – myself often included as of last September. Family takes precedence for others. For lots, it is a simple case of money, priced out by an unedifying cocktail of extortionate tickets, travel and – sometimes – accommodation.

But we are all united in our common adoration of one club. Hugging strangers on that memorable Monday at Wembley in 2015 to celebrating with masses of others in North London earlier this month – frankly, why does it matter what our backgrounds are or personal City story is?

Everyone has their own nuances and idiosyncrasies of supporting this marvellous club. And that’s what makes it all so magical.

So we will miss those players’ presence on the pitch during these weeks of uncertainty. It will be difficult not having that traditional Saturday escape, that cathartic release of energy after the daily toil of the working week.

Of course, in many ways, these weeks with no football fundamentally serve to render the sport irrelevant, but that doesn’t mean its return – whenever that may be – will not hold some form of significance.

Following City, regardless of what happens on the pitch, is a source of collective joy for so many. Churchill was right – we won’t change our mind or the subject.

For us, it’s City or nothing. Our heroes will soon be back. And I cannot wait.

Stephen Medlock 🗽 Queen for all my life 🇬🇧🇫🇷 @stephenmedlock ·
1h