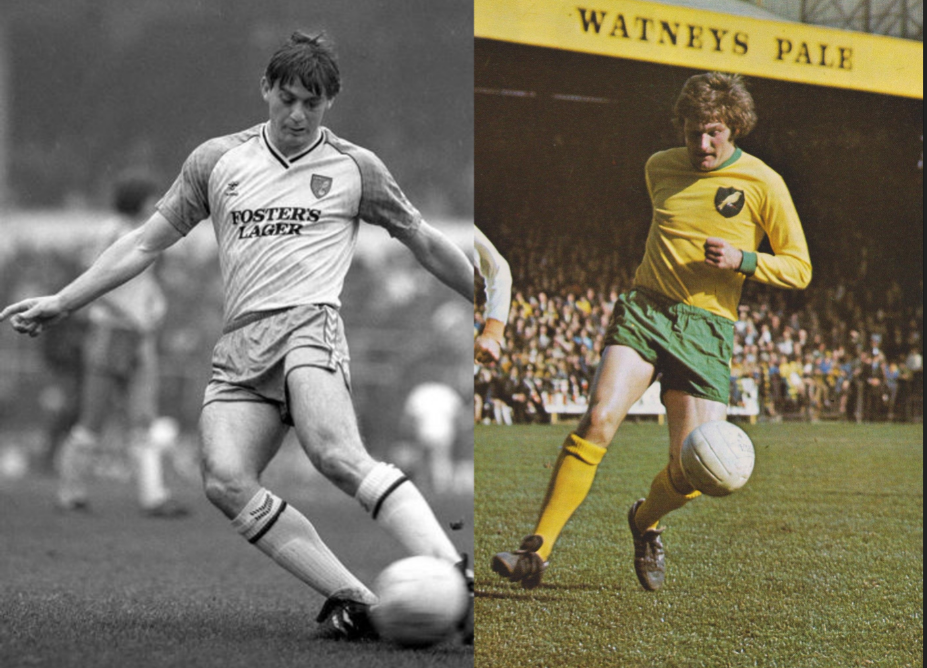 Before we even start let me explain. These are not necessarily the best players ever to pull on the green and yellow shirt. If so the brilliant but clean-living Martin Peters and Ron Davies would be in here. But they’re not.

These are the players that I will always remember and not necessarily for the right reasons.

Kevin Keelan. The Cat. Maybe not the best goalkeeper to have played for City but certainly the bendiest. I think he is the most agile footballer I’ve ever seen. I also loved his wicked streak taking out opposition forwards with his knee and also occasionally punching people.

Hugh Curran. One of only a handful of City players over the years who could be relied upon to score goals. He left us for Wolves. In those day transfers were quite rare – about one a season, and there was no such thing as loanees. I was devastated. I had to scribble over his name on my general book.

Ken Mallender. Lol Morgan signed him from Hereford. He was his cousin and everyone said ‘Oh yeah. Jobs for the boys’. He wasn’t particularly good, but for some reason I had a crush on him. Don’t ask me why. He was hardly a looker.  But I was thirteen OK?

Dave Stringer. I’ve got to be a bit careful here. He is still around these parts and there’s an outside chance he might read this. He was the unsung hero of that centre back pairing of 1972, very much Ernie Wise to Duncan Forbes’s Eric. I had a crush on him too I’m afraid. There was a lab technician at my school who looked just like him. I used to follow him about just because he looked like Dave Stringer.

Very occasionally when they are stuck for guests, Rob and Chris ask me to go on the Scrimmage. Chris rang me up and said ‘You’re on with an ex-player’. ‘Noooo!’ I thought. ‘Please don’t let it be Dave Stringer…’ It wasn’t. It was Peter Silvester but I still go all thirteen when there is a football player in the room.

Jimmy Bone. Wouldn’t get in Daniel Farke’s team. One of the strangest players I’ve ever seen. Used to run in a straight line without appearing to look up. But it worked. He scored lots of goals. He was great. Without him, we never would have had Hot Cross Bone Day.

Colin Sullivan. Full back. Very much in the Max Aarons mould without the touch. Used to go bombing forward, hair streaming in the wind. Put some great crosses over. Hundred percenter.

Ted McDougall. Never left the six-yard box but another one of the aforementioned handful. He always seemed very grumpy and wouldn’t take any you know what. But years later I met him when my friend and fellow MFW columnist Edward Couzens-Lake published his autobiography. He was quite the opposite. Pleasant charming, gracious. Maybe he’s mellowed with age. He looked very old though. Probably thought the same about me. It was a long time ago.

Phil Boyer. Ted McDougall’s Ernie Wise. Set lots of his goals up. Had the uncanny knack of knowing where the ball was going to end up and being there. His nickname was Charlie. I never knew why until about ten years ago. Even I was too young to get that one.

Tony Powell. Now I thought ‘Knocker’ was one of the most underrated we’ve ever had at Carrow Road. He was one of those players who had to have so much time on the ball. I genuinely believe worse players have played at centre back for England.

Kevin Drinkell. Proper old fashion centre forward. Headed the ball as hard as some can kick it. Never let the centre half know that he’d hurt him. Saw it as a sign of weakness.

Keith O’Neill. Dave Allen in football boots. Never wore shin pads. Magic left foot. Legendary for his antics off the pitch as much as on it. I love a bad boy.

Mick Channon. A brief but glorious encounter. Mick spent as much time in the bookies as training but boy did he make a difference. Won the cup for us as much in the changing room as on the pitch. Not that I was there. Unfortunately.

Ian Crook. I expect Chippy will appear in most of these columnist’s ‘favourite players’ and that speaks for itself. Ball on a sixpence and all that. Where would the Class of 93 have been without him?

Grant Holt. I know I have a bit of a reputation for carrying a torch for Grant Holt so I’ll stick to the football. Legend. Roy of the Rovers stuff. He always came up with the goods and scored in the big games when it mattered most.  Mercilessly taunted that lot down the road.  There’ll never be a another, although he did blot his copybook slightly when he signed his autobiography upside down for me.

Alex Tettey. That laugh. What a lovely human being. I’ll never forget him saying ‘They gave me an aspirin so I didn’t die in my sleep’ as if it was the most normal thing in the world. I’ll miss him so much when he goes.

Controversial selection maybe, but this is someone who grew up with Jim Morrison as a role model. I’m sure as soon as I hit send, I’ll think ‘B*gger, I missed out so-and-so’….

Sound advice from @iwanroberts73 in the EDP. @ToddCantwell_10 has the biggest opportunity in his career at Rangers. - #ncfc

Develop your career - then your brand, - without a career - there is no brand to buy in to.

How I think we line-up against Burnley tomorrow 🔰 #NCFC

Cardiff set to appoint third manager of season - much loved player to be assistant - https://fanbanter.co.uk/cardiff-close-to-appointing-third-manager-of-season-much-loved-player-to-become-assistant/