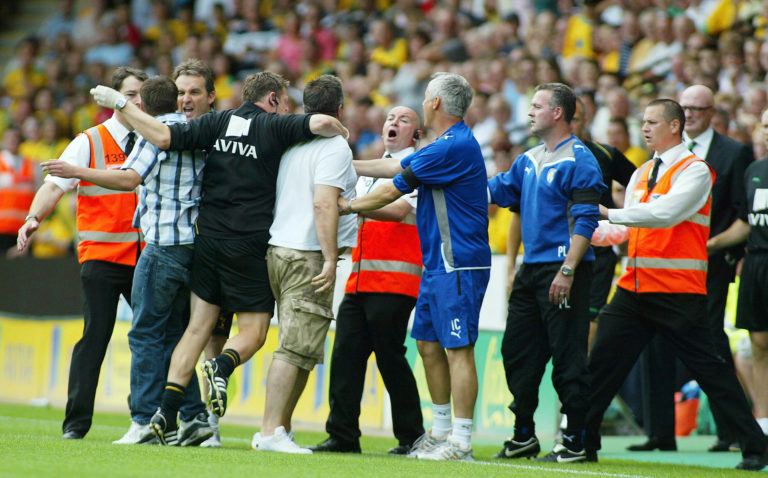 Our ‘From the Archives’ series wouldn’t be complete without one from the boss, and so, with his usual insight and foresight, here’s a piece that Rick wrote in August 2009.

It was scribed the day after the Colchester game. You know the one… the one that titled the Canary world on its axis.

As Rick says, despite the 7-1, there was a team in there somewhere… including a fine Gunny legacy by the name of Grant Holt.

For many a varied reason, Tom [Haylett] covered yesterday’s game.

So what follows won’t be the kind of forensic post-mortem many might demand on a day when the best-laid plans of mice and Bryan went right out of the window.

And within the first 20 minutes, too.

And in front of the biggest crowd at Carrow Road in some 30-odd years, to boot. And all on the very first day of the season. After a previously unbeaten summer.

In fact, even from a distance and even with the broadest of brush strokes, it’s hard to paint any sort of a picture that isn’t a total nightmare. From start to finish.

Talk to one or two and Tom Adeyemi offered something different. Albeit belatedly. Cody McDonald scored. Belatedly.

Every once in a while in football freak results happen.

I remember one Trevor Burton insisting to anyone that would listen that the Canaries were just ‘unlucky’ one, October day at Ewood Park; in fairness, losing 7-1 to Blackburn Rovers did little to knock Mike Walker’s men out of their stride. Two weeks and an international break later, and City were beating QPR 2-1 at Carrow Road as they rolled off the ropes and went on to finish third that season.

And there are some very, very big differences between now and then.

Or at least you can if it happens once every 17 years. Because 24,000 Norwich fans do not travel away; nor did events at Ewood Park play out in front of 18,900 season ticket holders who – in these desperate financial times – have not just shelled out the better part of 300 notes to watch that on the first day of the season.

Little wonder that Norwich’s season ticket fan base might now be stuck at 18,898 after two gentlemen made their fury all-too plain. I suspect they might not be renewing come 2010.

And here’s one worry. That for all the talk of big characters and genuine leaders, playing in front of 24,000 highly expectant and highly emotional supporters might still be too much for the Class of 09-10.

The moment that things go pear-shaped and the new keeper throws one in, it’s time to head for the hills; or else hide behind the nearest Us shirt. If I don’t show, can’t be given the ball, can’t make a mistake, crowd won’t get on my back…

For now – perhaps – we can put it down to first night nerves; a collective jitter. But the mood of the faithful is unlikely to ease by the time of the Wycombe Wanderers game – particularly if this week’s West Country tour and a trip to West London have failed to see Norwich return to their pre-season ways.

Indeed, the mood could be one of blind fury if City have been dumped on their Carling Cup first round ass by Yeovil, lost at newly-promoted Exeter and been mugged at Brentford. So, no pressure…

But a swift and sure response has to come; there has to be an all-but instant reaction. Otherwise the Doubters will be running amok before the first month of the season is out.

That the squad is good enough – on paper – to deliver said response is still not in doubt. At this level, there are enough proven players to win games in League One.

Which of those players are best-suited to play together and win games in League One might still be in considerable doubt after this weekend’s events, but the answer is in that dressing room somewhere.

And funnily enough, the response that Gunn now desperately needs is probably more likely to come away from home than it is in the fearsome cauldron of Carrow Road.

For one thing, you might think twice about giving Wes Hoolahan license to do as he pleases away from home; he’s one luxury that you can swiftly do without on your travels. Slam a Simon Lappin in front of Adam Drury and Christmas might not come quite so early for the lad that plays wide right for Yeovil, Exeter or Brentford.

Likewise, the glare might not be quite so intense; four, solid banks of four for the first 30 minutes and then – bit by bit – Norwich can come out of their shells and play. I’d take a 1-1 at St James’ Park now; I’d probably take a 1-1 at Brentford too. That’s a two-game unbeaten run going into the Wanderers’ game.

Are we scratching around in the League One dirt here? You bet. But that’s what happens when you get caned 7-1 at home on your opening home game. You’re left clutching at anything.

Do you give the luckless Michael Theoklitos another chance? Probably. For the self-same reason; that away from home you can probably find your feet that little bit quicker.

At least Plan B is not a bad one; if Ben Alnwick can’t cope with League One football then we are all in trouble.

Whether you’d throw an Adeyemi in from the start against a Yeovil is interesting; if the kid is a bit special, then maybe you need to give him his chance early. You can – politically – get away with more if you’re seen to be giving the Norfolk kid a chance ahead of, say, the still only half-fit lad from Scotland. That is one road that we have already been down once before.

No. Spin it whichever way you want, only Norwich’s very worst enemy would have wished that result on the Norfolk club.

Which is equally why, you suspect, that from within one, big house at the end of Newmarket’s famous Rowley Mile, a cackle of laughter could be heard at the final whistle blew.

And let’s never forget, Gunny saved us from Glenn Roeder. For that, we will always be grateful.