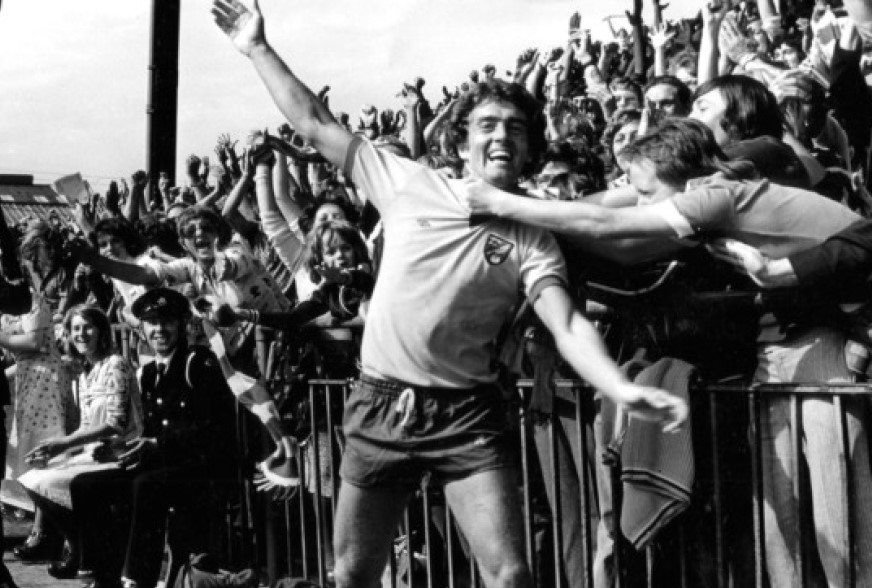 Malcolm Robertson’s recent reminiscences here about his favourite City players over the years set many of us thinking.

Fortunately, there are plenty to go around, special players in one way or another who we’ve watched in the Canary colours (albeit in a variety of shirts).

Some are genuinely outstanding talents. Others have a special place in our hearts because of associations with the time we saw them representing City. That’s why some of mine are recent, but others are from back in the Seventies.

For sheer talent and grace – both sporting and personal – no-one comes close to Martin Peters. But others have their own particular spaces in my memory.

It’s a perennial debating point who’s been our best striker over the years. Teemu Pukki would have a decent claim on that. But for the unique combination of qualities – not all of them attractive – that make an outstanding goalscorer, I’d have to put Ted MacDougall near the top.  Moody and arrogant no doubt, but with an ability to back it up.

If I admired MacDougall, I loved the player who understood and brought out the best in him. Phil Boyer was far less spectacular – think Dave Stringer in relation to Duncan Forbes – but a joy to watch and a key part of every success we had at that time. Quality.

The most physically distinctive player of the era (and another one for the purists)? Graham Paddon. Has there been another player who had two distinguished periods with us (for him, 1969-73 and 1976-81), separated by a chunk of time elsewhere? In Paddon’s case, no surprise that it was with West Ham.

Speaking of West Ham, the most personal memory for me. On 20 August 1977, I saw City beat the Hammers 3-1 at Upton Park, with goals from David Jones and Kevin Reeves.

Some might have raised an eyebrow about that choice for my first date with a smart and sexy young American lady I’d met at work. Remarkably, though, she stuck with me – and Norwich – for the next 40 years.

Kevin Reeves was also a useful player, by the way!

A more mixed memory surrounds another City product of the time. Martin Peters said there was a young player at Norwich he expected to have a glittering career, including playing for England.  The one I believe he was referring to (and I agreed) did play 250 games for us, but injury robbed him of the chance to fulfil his full potential.

As a complete contrast to Paddon, McDougall or Forbes, certain players tend to be overlooked because of their unassuming playing style or physical appearance. One of those, probably an unknown name to many younger City fans now, would be Mel Machin. But he could play.

The aesthetic pleasure of watching City teams under John Bond wasn’t matched until last season – and indeed this one – under Daniel Farke. Of course, there have been memorable individuals in the meantime.

If we ever needed a lesson not to judge a player too quickly, it has to be Iwan Roberts. Overweight and ineffective in his first season with us, he rightly became one of the closest to our hearts.

A similar scenario played out more recently with Tim Krul, of course. Howlers in his first games for us, reflecting his long enforced absence from the game, made us shudder.  In fact, some mangers would certainly have dropped him. That never crossed the mind of Daniel Farke, and the rewards have been spectacular.

We’re always gratified when a City player is selected for his country. But have we ever been more pleased than at Tim’s recall to the Dutch squad?

(One of the most disappointing aspects of having to postpone the Canaries Trust AGM was missing the opportunity to meet and chat with Tim. Hopefully, we’ll get the same chance when it eventually takes place.)

Certain players are simply hard not to feel affection for. We do love you, Paul McVeigh.  And Jerry Goss, Simon Lappin, Adam Drury.  At risk of some pushback, I’ll add Russell Martin to the list.

As regular readers may be aware, prediction isn’t my strong suit. I really believed Moritz Leitner and Mario Vrancic would make big impacts this year. On the other hand, I didn’t foresee the emergence of Todd Cantwell as a true Premier League performer.

If our reminiscences tell us anything, it’s that there’s a constant conveyor belt of City players ready to create, or be an integral part of, special memories for us. It’ll happen again, once the football we love resumes.

Sooner rather than later, we pray.

Hopefully someone from @BBCNorfolk (please let it be @CGoreham) will be asking @trussliz why someone at the Foreign Office spent £1500 at the #ncfc club shop.

If Carlsberg did months... #NCFC 🤩

Before another ball is kicked, Dean Smith (Deano) currently has the highest win% of any #NCFC manager of the last 50 years in the 2nd tier.
Early days and tough schedule to come but it's a fact for now.