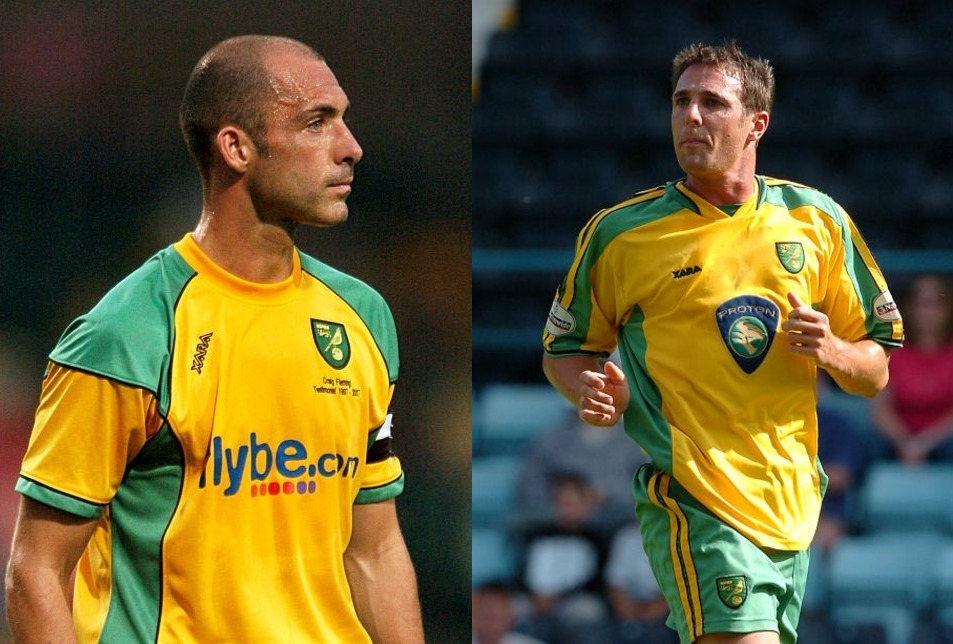 There is a cliché in football, that you cannot win anything without a decent goalkeeper. All very true of course, but the same principle applies to the centre backs of successful teams.

Think back to Moore and Charlton in 1966, Hansen and Lawrenson in the great Liverpool team of the ’80s and arguably the most famous backline of modern times, Adams and Bould/Keown at Arsenal.

Centre backs have always fascinated me because despite only being 5 foot 8 inches tall, I was one – reaching the dizzy heights of the Lincolnshire League and Anglian Combination before a ruptured Achilles tendon at Sheringham saved centre forwards from my crude attempts to play the ball and man at the same time.

I have decided to look at the key roles that centre backs have played in the history of Norwich City but it is a very personal journey to me, and in no way intends to be a history or debate on the best centre back the club has ever had.

I am also going to reveal exclusively how I nearly got a Norwich centre back and captain, the sack from Bruce Rioch!

I’ll start briefly with Duncan Forbes, briefly because far better writers than me have paid tribute to him over the last few months. Suffice to say, he was the captain at my first ever Norwich game in 1973, and was the benchmark which I have judged every City centre back since.

Just think of some of the brutal centre forwards he came up against and mastered: Mick Jones, Allen Clarke, Joe Jordan, John Toshack, the list goes on and on. Duncan was everything a centre back should be!

My next port of call is the mid-’80s when Norwich had a centre back pairing of Steve Bruce and Dave Watson. Bruce goes straight into Norwich folklore with THAT famous headed goal against our friends from down the A140. A beautiful moment which is a phrase I never thought I would use when writing about Steve Bruce, and how on earth he was uncapped is one of life`s great mysteries (like Grant Holt but we move on!).

Watson was a class act and it was absolutely no surprise that he got the international recognition his mate deserved.

The late ’80s saw the emergence of a really interesting partnership, which probably hasn’t got the recognition it deserves but I for one really liked Ian Butterworth and Andy Linighan.

Both were tall and imposing, complemented each other so well and it was a wrench to see Linighan go to Arsenal, where he famously scored the winning goal in a Cup Final against Sheffield Wednesday despite a broken nose (courtesy of Mark Bright’s elbow). [It was also the goal that confirmed City’s place in the 1993/94 UEFA Cup – Ed].

In the early ’90s, the club had some epic times as is well documented and the 1993 team was celebrated at a recent Norwich City Fans Social Club event (what a splendid club that is by the way). I was delighted that Rob Newman was present because as well as watching him play for Norwich, I was more used to opposing him on the cricket field as he displayed his all-round skills for Swardeston when I was playing for Cromer.

All-rounder fits the bill perfectly with Newman and my favourite moment was his goal against Southampton in the FA Cup quarter-final, which is still one of my most memorable nights at Carrow Road. John Polston was his partner in a lot of games; a really consistent performer who perhaps didn`t get the plaudits he merited.

Matt Jackson was not only the Norwich captain and centre back during his time at the club, but he was also a really good mate of mine and, yes, I nearly got him sacked!

We became pals at North Walsham Rugby Club where our sons both played. Matt was a cerebral character with caustic wit and I used to love his captain’s articles in the matchday programme, ended unceremoniously by Bruce Rioch after a humiliating home defeat to Port Vale!

I am biased of course, but I thought he was a damned good player, who could defend but also play out from the back. He also used to get me tickets for the players’ lounge after games, so that helped form my opinion.

The near sacking resulted from a memorable drinking session one Sunday when Walsham were playing. It was so memorable, I can’t remember much about it!

The next day, Matt came round to my house to say that his heart monitor at training had nearly exploded and Mr Rioch demanded to know what had happened. Matt did the honourable thing and blamed me of course. Rioch told him, in no uncertain terms, it was not to happen again or else. Of course, Matt took the advice.

I was sad to see him leave, but Nigel Worthington had decided on Craig Fleming and Malky Mackay as his main pairing. I’m delighted Matt went on to achieve so much success at Wigan Athletic and ended up in the Premier League, where he belonged.

Fleming and Mackay were an excellent partnership and were worthy successors to the great centre backs we have discussed. I, therefore, find it staggering that Malky was transferred on reaching the Promised Land in 2004.

Of course, Gary Doherty became a cult figure at the club, and rightly so, but when Simon Charlton, bless him, started at centre-back against Everton and Duncan Ferguson, it could only end in tears. Ferguson, unsurprisingly, headed the winner. How I wished Malky was still here!

Now I did like Flem, a fellow Yorkie of course, and that’s where the similarity ends. I always admire people who make the most of their ability and Flem certainly did that. Legend is much overused in sport but, for me, this man is a true Norwich legend.

I’m going to gloss over the Roeder/Grant/Gunn tenures if you don’t mind, as there was a revolving door of centre backs. It would make great quiz question to name them all but I can’t be bothered!

Michael Nelson has a special place in all our hearts, not only for the promotion clinching goal at Charlton but also for appearing to be a hell of a good guy.

The Championship promotion side of the following season saw my namesake, Elliot Ward, appear alongside Zak Whitbread. Now this man was good, very good, with injuries blighting what should have been a stellar career. What a shame.

In his first season with us, Sebastian Bassong was staggeringly good and rightly receiving of the accolades that came his way. It was such a shame the way it ended for him at Norwich, but we should never forget how good he was on his day and, of course, his partnership with Russell Martin in one of our greatest days ever at Wembley in 2015.

Ryan Bennett was on the bench at Wembley. I’m very interested in Ryan because he came as a pupil to the school where I was Vice Principal when he was in Year 10. I’m sure Ryan won’t mind me saying, he wasn’t a model pupil and, in fact, we had many a “wee chat” in my office.

However, he could certainly play football and, for spells at Norwich, looked absolutely top class. He is the one, of all the players I’ve mentioned, who I think would be comfortable playing the Farke way. Like Matt before him, I’m delighted he has done so well in the Premier League.

Finally, our present crop of centre backs have generated much debate as to who should play with who and so on. I like them all individually because they all have what their predecessors had in abundance and that is CHARACTER as well as ability.

Zimbo, Timm, Ben and Grant all get what it is to play for this great club and all four deserve to be mentioned in the same breath as the great players I have described.

Right, Gary, where is that famous tin hat of yours because I’m almost certain I’ve missed out somebody’s favourite centre back. I did say it was personal to me!

Love the new kit, Still Working wonders on the self funding model. #NCFC

Do I throw away my #ncfc 2002 goalkeeper shorts? The string has entirely disappeared & so not even wearable so completely useless. But.... they are 20yr old shorts that my grandparents bought me...