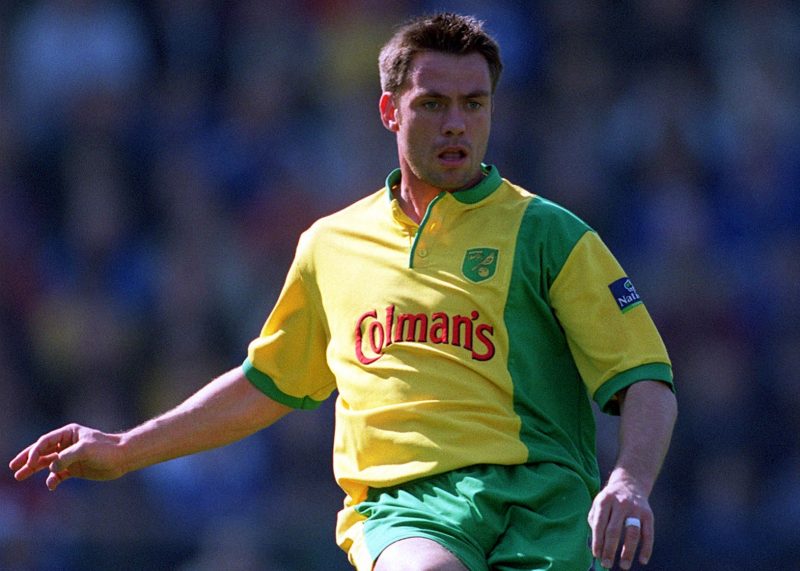 ‘The thrill of the grass’. Now if anyone can guess the literary reference; book and author – sans google – I’ll be mightily impressed.

In these dystopian days of social distancing and self-isolation, terms I had never heard until a few weeks ago, I’ve been trying to think of a few articles to pen that could help engage our MFW community. I’m very fortunate to live with my wife, toddler and newborn daughter, but many of you may be on your own or simply bored and need this website as an outlet. So I would like to hear all about the first Norwich match you attended, or if you were too young to remember it properly, the first game that you can really remember.

26th November 1994. A fixture that in all likelihood, will have little to no relevance for any of you. A game that saw a mid-table Norwich face off against a lowly, languishing Leicester City, a match specifically chosen to maximise the chances of seeing Norwich win on your debut. Well almost.
And what a game.

The anticipation was electric. The five-hour drive from Glastonbury to North Walsham was agonising, ditto the waiting around that evening. What would it be like? Will we win? Who will score? Questions that kept this 14-year-old boy alive and kicking all night. And when Saturday came the anticipation became unbearable.

We arrived at Carrow Road nice and early and headed straight to the club shop. I had already adorned my 1993/94 top, ‘egg ‘n cress’ and became the recipient of a cracking yellow and green scarf (later to be tied to the Shankly Gates), Mike Davage’s book Glorious Canaries and a variety of other memorabilia, a match programme, pens and the like, with a yellow club bag clutched tightly to my chest.

And then into the ground. Lower Barclay Block C right behind the goal at roughly crossbar height. A crisp winter’s chill in the air, strangers breaths rising on a clear afternoon.

The ground began to fill up slowly but surely and the chatter started to turn into songs. ‘Bryan Bryan Gunn – he’s got no hair but we don’t care’. John Deehan’s Green ‘n’ Yellow army. And of course On the Ball City.

The sides were out… KICK OFF!

Cue a frenetic opening period with both sides going hammer and tongs. No real chances of any note apart from one Leicester chance blazed over.

Suddenly, through a crowd of players I could see a melee of bodies at the River End goal, the ball zipped in from the left and suddenly it was flying high above Gunn’s head and into the net. Cheers from the crowd to my left. 1-0 Leicester. A toe poke from Mark Draper. Groan. This was most definitely not in the script.

The highlight from Norwich of that opening half was an electric Darren Eadie cutting in from the right and unleashing a shot that grazed the crossbar. Agony, anguish, groans, all emanating from the crowd.
Half-time came and went.

Team talks given and half time snacks consumed, the players were back out. No subs made. ‘Come on Norwich’ we roared! The game ebbed and flowed.

56th minute, corner at the River End. In floated the cross and leaping like a salmon, right in my eye line, albeit from the length of the pitch, was super Jon Newsome – a bullet header through the palms of the Leicester goalie and Bam! 1-1 Game on.

By this point, the floodlights were on and the sky was a deep shade of blue. Is there anywhere better to be than Carrow Road under the lights?

Deehan rolled the dice and introduced a spritely Jamie Cureton for the ineffectual Mike Sheron and the game appeared to be petering away into a 1-1 draw.

Cometh the 90th minute, cometh the Sutch. He didn’t score many (surprisingly I saw two of them) but when he did, boy were they great.

Gliding in from the right he dribbled… crossed… the ball rebounded and Sutch smacked it! Rocketing into the far corner.

This 14-year-old lad waved his scarf, screamed with pure unadulterated delight and hugged complete strangers. The game was over. Done. Three points in the bag and off home.

If you could choose an outcome of a debut game. An injury-time winner is surely the only choice. Shame it wasn’t into the Barclay, but to be honest – who cares!

I’d love to hear if any of you were at the game and remember it. And also what your debut games were (or the one you most remember).

And if anyone’s interested then this link gives you the line ups that day.

And here is the game!

Incidentally, I’d only ever seen the clip of this game from the Norwich season review video (which isn’t on YouTube) but the Leicester video is actually far more extensive than the Norwich one, so for the first time since 1994, I’ve been able to watch Eadie glide in and hit the crossbar.

I shall send the clip to my dad who was with me so he can enjoy it at this most melancholy of times.

54.34 minutes in. And don’t forget the literary reference guess. Enjoy!

Does anyone know if Onel Hernandez is in Germany with the rest of the squad? #ncfc