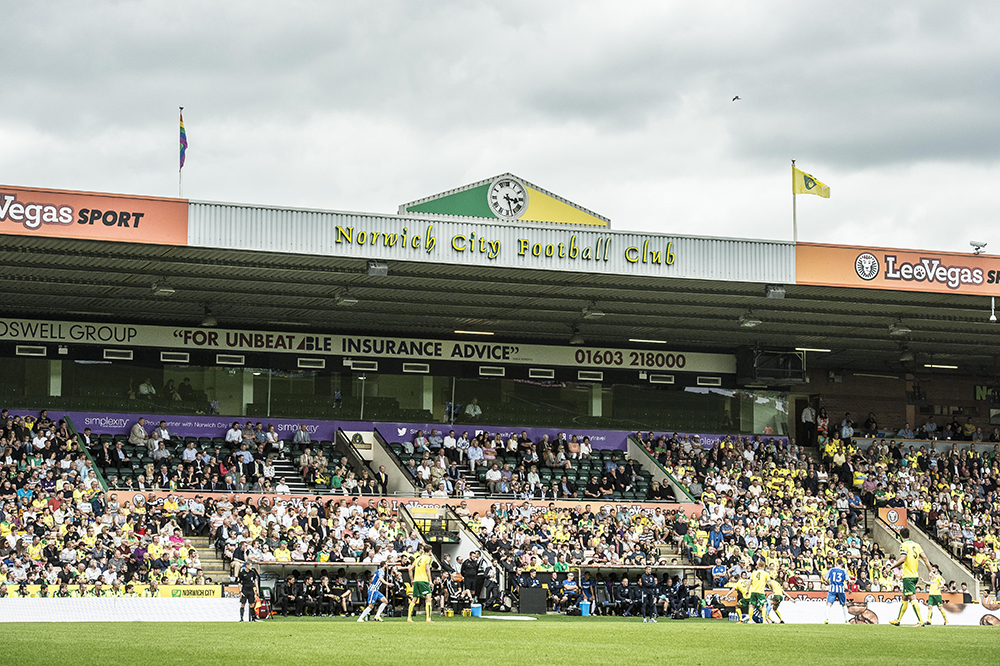 The latest victim to take on the MFW guest blog challenge is Simon Mitton – a familiar voice for those in the #NCFC Twitter community, who describes perfectly what it is to be an “average fan”.

Well worth a read…

Let’s get one thing clear right off the bat.

I’m not a ‘super-fan’. I’m not elite. I’m not even a season-ticket holder.

I can spin a few epic “I was there” away-day tales for some, but by no means all, of the club’s biggest days. I’ve seen some magical victories. I’ve seen some abject defeats. I’ve seen pretty much everything in between. But I’d be hard pushed to come up with something that thousands of fellow Canaries haven’t experienced.

So, if you’re looking for penetrating insights, some in-the-know anecdotes, you’re in the wrong place (but read on anyway, it’s really good – Ed).

Admittedly, this may not be the best sell job for a first-time piece, but amidst all the football-related content that the information age gives us access to, maybe, just maybe, there is a space for the average fan experience.

(When it’s time to write my memoirs, the title I already have picked out is “A Life More Ordinary”, which I imagine will do just as good a selling job as the opening three paragraphs of this piece).

But what does it mean to be an “average fan”? The answer, really, is quite simple. It’s that the club, the players, the matchdays, mean as much to me as they do to anybody else.

I’ve never been one for the idea that because you’re a season-ticket holder you care more, or if you’re a home-and-away member the defeats hurt more, or that if you’re a shareholder you’re entitled to celebrate the good times more than anybody else.

The history of my love for Norwich City begins at the age of 12. My first visit to Carrow Road came in August of 1985. Oldham Athletic were the visitors that day, the opening fixture of the 1985-86 season, which saw the Canaries starting life back in the old Second Division. I stood on the River End terrace with my brother, and it was during that first season that we graduated from there to the Barclay.

I’d like to say that graduation was some sort of right-of-passage – something that in the movie adaptation of my memoirs could see Elijah Wood playing me, running with the Yellow Army, and seeing off the likes of Millwall and Portsmouth – but, in keeping with the tone of this piece, it was much more pragmatic graduation.

On the way to a home game against Blackburn, the coach from the Black Cat garage in North Walsham broke down on the way into the city. The phrase “sh1t, we’re boiling!” uttered by the driver as steam plumed around the front windows, has since entered Mitton family folklore.

This resulted in us being late to the coach park, running to the ground to make kick-off, and going through the Barclay turnstile rather than running all the way around to the River End, to be sure we didn’t miss anything. From thereon in, the Barclay was our home.

In the near-35 years since, I’ve seen pretty much everything a club our size could experience – promotions, relegations, play-off final joy and despair.

From my first idols – Chris Woods and Kevin Drinkell – to the current band of brothers, I’ve seen some of the brightest players ever to pull on the shirt, and some very dark days; often have been left wondering how some of those in yellow were ever able to make a living from the game.

But the point is this – so too has pretty much everyone else who’s been a fan for as long as I have.

The fact I’ve never been a season-ticket holder does not mean that any of those experiences have meant any less.

My family moved away from Norfolk when I was 14. From that point on, the question has always been how many times I can get to Carrow Road in a season.

In those early days, it was a case of talking family into driving me up there.

While at university, it was a case of finding the money to go. I was fortunate in that the famous UEFA cup campaign coincided with my work placement year, meaning I could find the money to travel up for our first home game against Vitesse Arnhem. But I wasn’t there for Munich. Part-timer, hey?

Through the late 1990s and early 2000s, away games were easier to just rock up to, so I’ve collected a fair number of away grounds, but I’m not close to being a paid-up member of the ’92-club’.  In latter days, balancing work and family commitments has become the key.

But here’s the thing – none of that matters on a match day. Whether I’m at Carrow Road, now with my son who I’ve so far safely steered away from the lures of “the big clubs”, or watching on TV, or scrolling Twitter, the highs are AS high and the lows hurt AS much as anyone else.

Ask any of the neighbours who heard my boy and I roar as the goals went in at Elland Road last season, or the door I put my foot through in my student house on the day relegation was confirmed in 1995.

All the best days and funniest stories that I recount will resonate with the thousands and thousands of “regular” fans of all clubs, all across the country.

Don’t get me wrong, I would love to be a season ticket holder, to go every week, and to visit so many more of the fabulous communities and stadiums that are part of the culture of football, but the fact I’m not able to shouldn’t be a reason to assume the highs and lows of supporting my club are any less pronounced.

The most common instance of this perspective is usually around access to tickets for “big” games. It’s always disheartening when things turn nasty around that time.

There have been occasions when the club could have done a better job of rewarding those who are able to invest more of their time and money in going to games, and I’m all for that, but what makes me uncomfortable is where frustration at such arrangements is turned on other fans, who don’t have any control over that distribution.

I won’t ever apologise for taking a ticket whenever one is available at a time and place, I can make. I’ve earned that over 35 years. But the whole point is, even those 35 years don’t really matter.