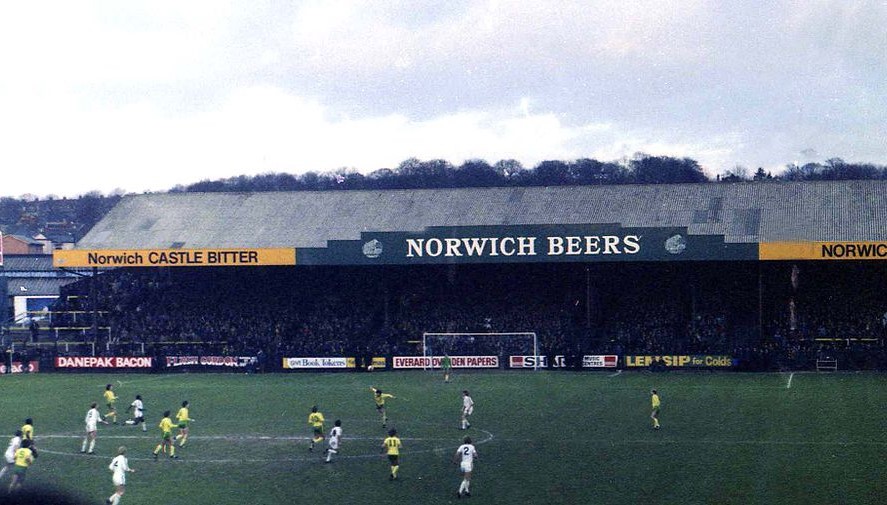 Another member of the #NCFC Twitterati who picked up the guest blog baton was our Worthing Yellow, Mick Saunders, who describes beautifully the journey from Kent to Carrow Road via 80 Football League grounds.

Take it away, Mick…

I became aware of football as a “thing” during the 1970 World Cup in Mexico, helped in no small part by the Esso England Squad Coin Collection that my dad was adding to each time he put a tiger in the tank of his Austin 1100.

My first proper memory of a football match was Charlie George scoring Arsenal’s extra-time winner against Liverpool in the 1971 FA Cup Final. A scorching hot, sun-drenched Wembley (1970s Cup Finals always seemed to be), his iconic supine celebration, rolled down socks and his long flowing hair caused some mayhem in my Arsenal supporting family household in Kent.

The first match I attended was thanks to the Italian owner of “Enzo’s” – a ladies hair salon in town. I was friends with his son and so it was that on the evening of Valentine’s Day 1973, I was taken to Selhurst Park to witness a massacre – Enzo’s beloved Verona on the end of a 4-1 pasting by Crystal Palace in the Anglo-Italian Cup.

My takeaway memory, however, was the hirsute and thickly moustached Palace striker Don Rogers and the goalkeeping exploits of Palace custodian, John Jackson.

It was less than three weeks later, partly as an act of rebellion to my dad and his large London family’s Arsenal allegiance, partly due to City’s presence in the 1973 League Cup Final against Spurs, and partly learning that my mum’s grandfather hailed from East Anglia, that my footballing affections were coloured forever yellow and green – the rest as they say, is history.

It was only a little later that I realised the coincidence that my dad “Ron Saunders” shared not only a name, but similarly gruff demeanour, with the then City manager!

So that’s how Kevin Keelan became my hero and the first of many City favourites over the years. There wasn’t a lot of Norwich coverage down in darkest Kent, I mainly scoured the Sunday papers for the smallest, single-column report of our latest game – even if it did usually focus on the opposition no matter the result.

Every now and again City would appear as one of the lesser games on The Big Match, but we had LWT, not Anglia. If we were ever on Match of the Day, and it was very rarely, it was like Christmas had come early.

Boyer, Peters, Neighbour, Fashanu – they were the posters on my wall, all clipped carefully from Shoot Magazine. I had to specially order a Norwich Subbuteo Team, which took weeks to arrive into the local toyshop – I didn’t realise they were all made just 10 miles away, near Tunbridge Wells! Not to mention the failed attempts at getting a replica Admiral shirt from our local sports shop. To this day I still covet one from that beautiful, colourful catalogue of dreams.

My first City game came courtesy of the FA Cup 3rd Round draw for 1978 and one of my father’s nine siblings, who happened to live in Walthamstow. We used to visit every month and would drive through the Blackwell Tunnel, passing the old Matchbox toy factory in Hackney and right past Brisbane Road.

When that velvet bag in Lancaster Gate delivered “Orient will play… Norwich City” well, it was fate, wasn’t it?  The tie being rescheduled for a Friday night didn’t help me in convincing dad to take me along, but we went and so it was that on Friday 6th January 1978 I finally saw my yellow and green heroes in the flesh.

It wasn’t the best of games but the yellow and green, contrasting with Orient’s own, iconic white with red braces kit, was dazzling and a late Roger Gibbins equaliser saved City’s blushes and forced a replay. It was relatively recently that I realised that Orient had a certain young Glenn Roeder in defence that night.

Orient reached the FA Cup semi-final that year, so you know the replay didn’t go well – but then again, 1978 is an FA Cup year we’d all like to forget!

My next game, and my Carrow Road baptism, wasn’t until 1981, when my £5-a-week pocket money was just enough to get me, fortnightly at least, to Norwich on the train, entry into South Stand Corner, a programme and a Mars Bar from the trolley that used to come round the edge of the pitch.

A 0-0 draw against Bolton wasn’t an auspicious start, but I was instantly hooked. I soon migrated to the Barclay centre-pen and spent plenty of those teenage Saturdays getting my regular “fix” of yellow fever including an excursion to the Hawthorns, where my FA Cup dreams were dashed.

Starting work gave me access to more cash, and more football – as the ‘80s progressed I became more and more of a home and away regular. I linked up with the Capital Canaries for travel, drinking, darts and even drove to West London on a Sunday morning to turnout alongside MFW’s very own Stewart Lewis in their West Fulham League side!

There was an unparalleled excitement, occasionally laced with the frisson of fear, in those heady ‘80s days travelling around the country and watching City from the Barclay terrace. Smaller crowds, yes, but some atmospheres I’d contend have yet to be equalled by the moneyed Premier League’s homogenised and gentrified offering.

Nearly fifty years later, after more than a thousand matches and eighty-odd league grounds, the ghost of Don Rogers’ moustache has continued to haunted many, many more disappointing visits to Selhurst Park against Palace, Charlton and Wimbledon.

Moreover, it’s with no thanks to the likes of Cyrille Regis, Jimmy Case, Pat Nevin and John Byrne, that I’m also still waiting for my very own sun-drenched, yellow and green “Charlie George” Cup Final moment at Wembley.

Does anyone know if Onel Hernandez is in Germany with the rest of the squad? #ncfc