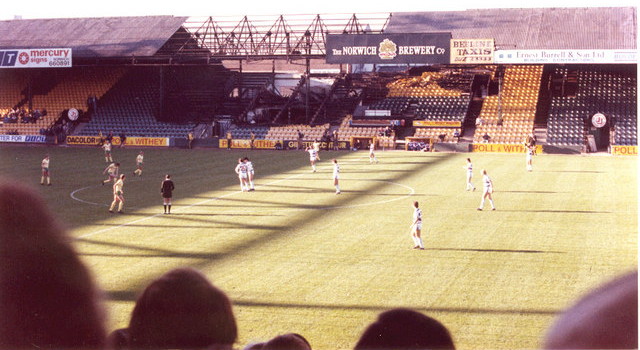 Elizabeth II is on the throne, Margaret Thatcher is prime minister, and Tears for Fears are storming the charts with Everybody Wants to Rule the World. Richard Briers is wittering his way through Ever Decreasing Circles on BBC1, Morons From Outer Space is showing at the ABC, and somewhere in Croxteth, proud mum Jeanette Rooney has just given birth to a son called Wayne.

It’s a long time ago, but not that long ago. Some of us still remember…

The 1980s were a very different time to now. The players, the stadium, cars, work, attitudes, clothes, life in general… everything was different. Oh, and the haircuts – especially the haircuts.

So, what connects us in oh-so-sophisticated 2020 to those distant, fizzy-mulleted, brick-phoned days? Well, it’s the constant and reassuring thread of football (current virus unpleasantness aside) and its continual evolution and renewal.

Perhaps you attended Carrow Road in the mid-1980s? Perhaps you remember…

❖ Standing on the terraces.

❖ Queuing for £3 children’s standing tickets at the River End when my teenage pal (AS) and I were embarrassingly over-age and over-tall. And getting in.

❖ Alcohol sold at the ground on match days – but more expensive than local pubs, hence the pre-match and/or post-match (under-age) pint at the Redan or Rosary.

❖ Interesting language (often in the form of broadly instructional advice to managers, players, and opposing fans. This may still apply.)

❖ Very few women. Apart from the odd reluctant belle propping up her boyfriend’s hobby in return for a promised shared shopping trip.

❖ The games and players, eg. the glorious optimism every time Louie Donowa got the ball knowing he’d hare off directly towards the opposition’s goal/corner flag and just maybe create something. Alas, our optimism was rarely rewarded, but we still had a soft spot for the Donster. (Best wishes Louie).

❖ Chris Woods’ ‘save’ at Wembley. Yes, we were there – as were loads of you. You might have seen us. We were stood right behind the goal. At the Sunderland end. (That’s what happens when you rely on a friend-of-a-friend-of-a-friend to get you a ticket.) I had a great view of Clive Walker’s penalty though, which grazed the post. The Sunderland fans around us were not best pleased, especially when my pal (JP) jumped up and cheered. But the superb Woods would have got to it anyway. From the opposite end, we enjoyed the wonderfully colourful, flag-waving vista of the Canary Nation celebrating at the final whistle. An almost unique vantage point I guess. An unforgettably emotional event.

❖ The coach breaking down on the way home from Wembley. Another unforgettably emotional event. Fortunately, other coaches stopped to help us, each rescuing a few passengers at a time. They were full too, so we had to stand in the aisle ducking against the ceiling for two hours. Gratitude remained the dominant emotion.

❖ In other news… Do you remember the results published immediately after a match? In a newspaper that was actually pink, and printed with non-fast ink that turned your hands black. Tut, whatever was that publication called…?

❖ The ‘Don’t Expect a Goal-Glut’ headline which appeared in the Eastern Daily Press the night before a home game against badly struggling Bradford City. Naturally, the score ended 0-0. ‘Don’t expect a goal-glut’ became quite a phrase after that with me and my pal (AS) when referring to any promising event which delivered little. Like a night out at Tudor Hall.

❖ An icy winter-friendly against Cambridge United with snow shovelled off the pitch up against the advertising hoardings. A dismal game in arctic circumstances won by a sole goal thumped in by much-anticipated new signing Darren Beckford. (That turned out well, didn’t it?) The game was otherwise memorable only for the snowball lobbed by some (impressively accurate) hooligan from the River End terrace that nearly knocked the Tam o’ Shanter off the Bovril man’s head as he slowly circled the edge of the pitch. He didn’t even flinch, just kept serving hot drinks from his wheeled trolley, with his hat all askew. God bless him. A Carrow Road fixture and we loved him.

❖ Watching games played in a stadium with only three sides (the Main Stand having burned down in 1984).

❖ The nascent afro of the excellent and always reassuring team physio Tim Shepherd as he sprinted onto the pitch to sort out x, y, or z’s dodgy knee again. The magic sponge had been replaced by the magic spray even in those days. Well done, Tim. Many fantastic years’ service saw him make an appearance as a player for a few minutes in a testimonial when he retired. Everyone was delighted for him. Still miss his pitchside presence even now.

❖ The novelty of a digital scoreboard.

❖ The illuminated mid-game announcement on the aforesaid scoreboard (with a couple of bulbs missing) confirming a fee had been agreed with Nottingham Forest for Ian Butterworth (£160,000). He’d played several games on loan and had proved himself a classy centre-back. The announcement was well-received. And not a bad buy.

❖ Ian Culverhouse’s eerily wonderful 30-yard own goal v Grimsby Town. A spectacular lob over a stranded Chris Woods when we were 3-0 up. The game changed from then on and we scraped home 3-2. A win’s a win though. A rare blip in an otherwise brilliant City career for Cully, a sublime full-back.

❖ Berry & Drinks. I’ll never forget this, one of those great moments in football. City were playing Stoke (I think) and in defence for the opposition was tall, combative defender, George Berry, sporting his distinctively impressive Bob Ross-style hairdo. Kevin Drinkell went up for a header with him somewhere near the centre circle but Berry didn’t jump, so Drinkell ended up sprawled across Berry’s shoulders forming a human ’T’. An aggressive sort of tussle ensued with the players locked together but pretty soon it petered out into hilarity as they paraded around the pitch like a hammerhead shark sharing the crowd’s laughter. Loved that.

❖ Short-term loanee David Hodgson’s insanely aggressive approach to opposition goalkeepers. Especially those who foolishly attempted to waste time when he was within lunging distance. Hodgson was a right handful and was sorry to see him leave. Suspect he would have collected several goals, crocked opponents, and red cards along the way.

❖ Kevin Drinkell’s name on the scoresheet. Again. And again. And again. A brilliant striker, one of our best ever. The only good thing about him leaving was it was virtually a swap with Glasgow Rangers for Robert Fleck. Would have loved to see those two play together though at Carrow Road. Between them they had devilment, entertainment, and goals aplenty. (Apropos of nothing, Drinkell was a really good snooker player, playing for a private club somewhere near Hethersett.)

❖ The officials. There was an excellent top-level referee we saw a lot but whose name I can’t recall (grey hair, moustache, looked a bit like a young Neville Chamberlain). He was great with the fans. I remember him once having given a controversial corner to the opposition, stalking from the centre circle into the crowded penalty box waving his arms in order to better conduct the ‘the referee’s an onanist’ chant from the Barclay End. Very amusing at the time. You don’t see that sort of referee/crowd interaction much these days (or then, to be honest).

Perhaps that’s enough grey and grizzled old memories for the moment. Those wispy-bearded old days were far from perfect – in fact, extremely imperfect in many ways. Progress in society, life in general, and The Beautiful Game has improved amazingly since the 1980s, but when you’re my age you can’t help wondering if we lost something along the way…

But what was that thing we lost?

It was our youth.

And you can’t help being nostalgic about that (especially as City went on to the win the league comfortably that year and got promotion back to the top division at the first time of asking. God bless Ken Brown and the boys).

So, best wishes to all you lucky 15-25 year-olds currently enjoying your youth. This is a great time of your life. Take time to enjoy it. The world is yours, believe me.

Also a hearty nod to those of us who have a few more tree rings under the bark. We have the joys of the present, but also the privilege of looking back on a rose-hued past filled with pleasant and fond nostalgia.

But for all of us, of any age, it’s great to look forward to the interesting, extraordinary, and successful times Norwich CityFC has in store for us. Cheers everybody – here’s a toast to…