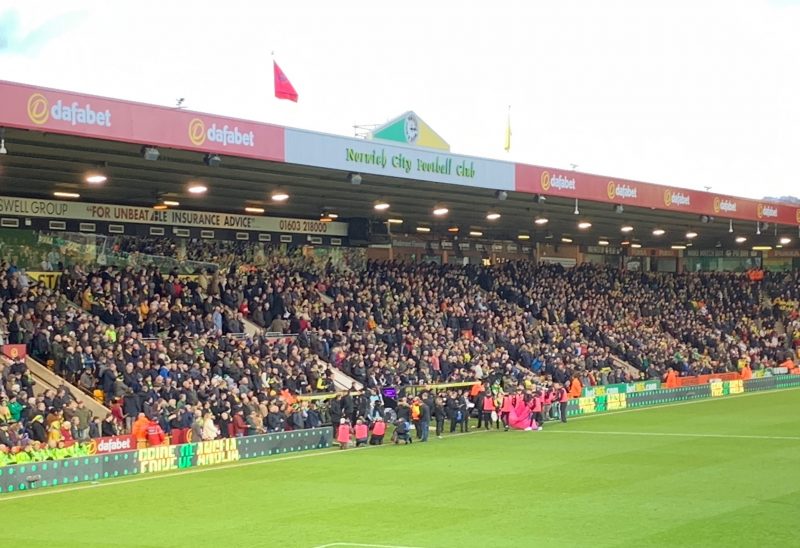 Well, as we all know the wheels are firmly back on the Premier League gravy train and it’s ready to roll on June 17 with Sheffield United against Aston Villa and Manchester City versus Arsenal. The catch-up games of course.

Apparently City are planned to resurface on June 19 against Southampton at Carrow Road. Not that any one of us will be there to see it of course, which I far from disagree with under the circumstances for what little that might be worth.

As Mick Dennis said on Saturday: “If the madness of being a football supporter can be explained at all then it is about hankering to be part of a tribe. Only being there, being part of the shared experience properly enforces that feeling of belonging”.

And I will miss that immensely, no doubt about it.

We’re not allowed anywhere near the ground, which again I can quite understand. No meeting up with friends or acquaintances on a matchday and no dropping into the pub. Chance would be a fine thing.

And no banter with the opposition supporters either, which is always something I’ve quite enjoyed with the exception of followers of two or three clubs whom I don’t need to mention here. You’ll all know who I mean.

Yes, as Mick suggested, we might be better than our bottom feeder rivals – and indeed others – behind closed doors. Also, we may not be and time will be the discerner of that.

I will particularly miss the matchday atmosphere – all the chants exchanged during the games for sure. We surely shouldn’t sing the ones we used to against Brighton or Watford any more [and again I really understand why] but some gene fault within me always means I want to hear the opposition sing back. The Man Citeh quick response to “we love you Paul McVeigh” was a joy all those years ago.

And as for “You’ve only come to see the Arsenal”, that’s on the backburner too of course. For the foreseeable probably.

And we’ll never hear “We all live in a Robbie Fowler house” again. Even the Scousers gave up on that one many years ago but it sure made me laugh at the time.

Wayne Rooney feeling the full force of “does your missus know you’re here” was a sadistically enjoyable experience. The chant was created for Peter Shilton back in the dark ages of course. The Man United Londoners snapped back with… nothing. But Rooney heard us all right.

Considering the FA Cup Final [should we get there, it’s not impossible] how would you comprehend Norwich City being at Wembley when we, the heartbeat of the club, are governmentally banned from the trip to London?

And the immediate future seems so hollow, like jumping into your car and finding you can’t put the hood down any more, the sounds don’t work and there are only three wheels – with no spare in the boot.

However, this is the shape of things to come and we all respond in our own different ways.

This comment from MFW commenter “John” on Mick’s Saturday piece really resonated with me.

“Yes, I’ve missed football, but with every day, unfortunately that miss seems less and less. And in all honesty, I don’t know if I will ever get to see my team in yellow and green play at Carrow Road again.”

Now I don’t concur with John’s first sentence but I can really relate to him on the second one.

It’s getting to the point where I don’t know if I’ll ever be back at the Carra either. I’m sure I will, I know I will etc but, will I really?

Mrs P is quietly suggesting that I give it up, we don’t even know what league we will be in next season and going to a game wipes me out for six hours of a matchday as I love the whole experience, and meanwhile she’s stuck in [or out] with the dogs.

Sue doesn’t really care if I go back or not [she’s a big City fan too] but I’m starting to think she might have a point.

And so does “John”. Neither he nor I can be alone in our thoughts so we’ll see what happens.

I certainly won’t return for socially distanced seating on a lottery basis if that ever comes to pass. Shove that.

But to end on a bright note it looks like we might have a chance to play ourselves out of trouble, which I guess the majority of us are pretty much happy about.

As Lenny Kravitz said… it ain’t over ’til it’s over.

I cannot comprehend never going back but the current circs suggest it might be the end of my season ticket as nobody can pay for nothing forever.

I’ll hang on as long as I can and see what transpires.

At least we all know the club will not rip us off financially unlike a couple of other teams I can think of!

Here it is, the Godzilla v Kong of Canary Call. #NCFC

What a finish from the skipper! ⚡