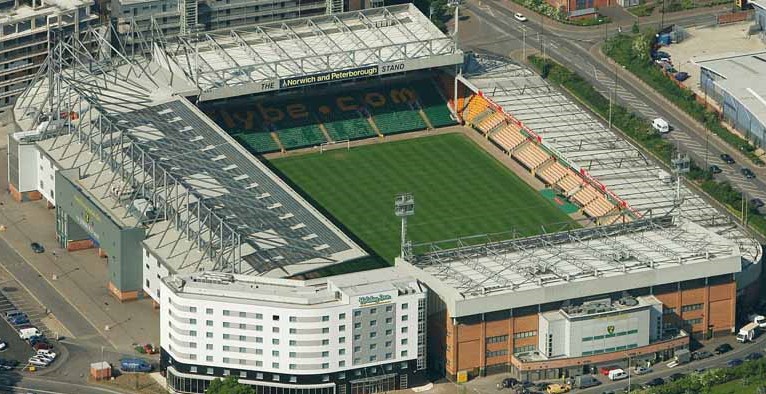 As I’ve mentioned before, going back through Kev’s MFW archive to find a retro piece that works in semi-lockdown has been a joy. Not least because regardless of which NCFC era or regime he’s writing about, there’s always (literally always) something that resonates.

Not going to lie though, this one, from November 2011, narked me.

Well, little did I realise, but a full three years before I’d used my lame (but amusing to me) ‘Trigger’s Broom joke to describe the ‘new’ Carrow Road, Kev had beat me to it. And he told it so much better.

You know, sometimes things which you believe to be unpleasant and even morally wrong can turn out to be enjoyable.

(At least, that’s what I keep trying to persuade my wife.)

It’s taken me a while to realise this. When I turned 40, I felt that my tastes and views were pretty much decided and unlikely to change; ten years later, I find that I’m much more prepared to revise my opinions.

Whether this is because I’ve become less judgmental (a good thing) or because my powers of judgment have diminished (a bad thing), I’m not sure.

But there are plenty of examples I could cite. In fact, I will.

Disneyland Paris. A tawdry, garish commercialisation of childhood, but at the same time bl0ody fantastic.

Gary Neville. On Sky Sports. In the pub. It sounds like an axis of evil – or indeed, a Cluedo solution – but is actually very good.

The Next building (formerly C&A) on Hayhill. Its proximity to the medieval beauty of St Peter Mancroft used to bring to mind Prince Charles’ famous comment about a proposed extension to the National Gallery (‘a monstrous carbuncle on the face of a much-loved and elegant friend’), but these days I rather like the starkness of the contrast.

Ipswich fans. Their applause for Billy Sharp’s goal which put Doncaster 2-0 up at Portman Road earlier this month was genuinely heart-warming. There, I said it.

And finally, the Holiday Inn at Carrow Road.

Although I understood the club’s need to make money from the venture, building a hotel in the corner of the ground always saddened me. The space it occupies should be taken up by supporters, I thought. The building looks out of place and just, well, wrong.

At the end of last month, the whole family came up with me to the Blackburn game and we decided to stay at the hotel. And it was terrific.

In my time, I’ve looked out of hotel windows at oceans, mountains, lakes, valleys and vast cityscapes, but that view tops the lot.

Of course, we didn’t watch the match from the room. But I did spend a fair proportion of the evening looking out of the window at the still-floodlit pitch.

“I don’t see what you find so fascinating,” said my wife. “It’s not as if you hardly ever see it.”

“I could say the same about that,” I replied, pointing at the X Factor on the TV.

But in fact I tend not to spend much time looking at the surroundings at Carrow Road. I’m too busy concentrating on the action on the pitch. Or, until a couple of years ago, looking down at my feet or covering my eyes.

Just having the time to gaze out across the stadium and take it all in was wonderful. I looked around at the silent stands and thought how vibrant and passionate they had been just a few hours before. I picked out my seat in the River End and contemplated how much of my life I have spent in that spot and how many emotions I have gone through there over the years.

And I stared at the pitch. During my time as a City fan, all of the stands around it have been rebuilt – throwing up the old philosophical question of whether it’s still the same broom if you change both the handle and the head – but that green rectangle has remained constant.

So many memorable moments have occurred on that patch of earth. Close your eyes a little and you can almost see the ghosts of the past re-enacting them…

“It’ll still be there in the morning, you know,” my wife interrupted.

And sure enough, the first thing I did when I woke up the next day was to go over and peer through the curtains at the stadium in the early morning light.

I really can’t recommend staying there highly enough. Even if you live in Norwich, it’s worth treating yourself to the joy of waking up with that view out of the window.

And it might be a good idea to do it sooner rather than later. If the club does stay in the Premier League for the next three years, the planned addition of an upper tier to the City Stand will obscure the marvellous view of the city beyond. Though I’m sure the bigger stand will be beautiful in its own way.

If you don’t want to take my word for it, by all means check out Tripadvisor. At the time of writing, none of the 118 reviewers has given it a ‘Terrible’ rating – and there’s only one ‘Poor’, from a guest who stayed there a while back and found ‘the carpet in the room resembling a murder scene covered with blood’. (Not, I hope, caused by a distraught City fan after the Colchester game.)

I’m already planning our next visit.

Note: the author would like to make it clear that he has received no inducement, financial or otherwise, from Holiday Inn to write this article. Nor will he feel able to accept any form of privileged treatment such as a free room upgrade by way of appreciation.

And finally… I see that Paul Lambert has admitted that he doesn’t know the words to On the Ball City. I don’t have a problem with that, as long as he doesn’t try to mime in the style of former Secretary of State for Wales John Redwood.

Any excuse to watch that clip again.