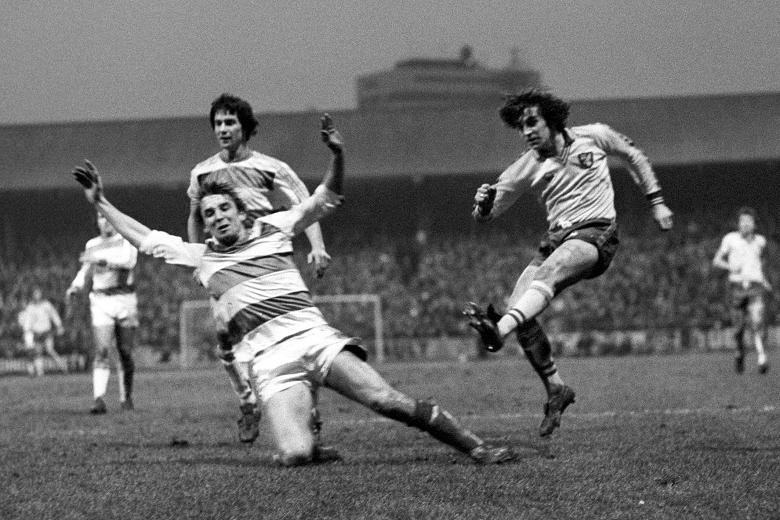 Here’s a beauty from our Ed from 2012, where he looks at football’s (then) new-found love of stats; in particular the one pertaining to the buying selling of players.

Worth noting is the different direction this club is now taking in that regard, and how Ed’s summary of ‘a club that is on the up, ambitious and determined to succeed’ is now being attempted via a very different route.

Football likes statistics and records. Most appearances, goals, points, highest this, lowest that.

The obsession for statistical data has recently taken on new levels of anarchy with leading bookmakers offering odds on  ridiculous in-game incidents. Time of the first throw in; yellow card; corner; goal kick etc. The bottom line is if it might happen within the ninety minutes, you can put a bet on it. Ludicrous.

To be distracted from the game and the joy of watching it unfold in favour of desperately hoping the first yellow card will be awarded between the 11th and 15th minutes may enhance the enjoyment of some, but I can’t see it. Sorry. That’s not football, that’s being a geek with money to waste. Go away.

This love of all things analytical has sprung from the obsession that US Sport has with it. Try watching a game of baseball for example. One of the game’s commentators will, inevitably, during a lull in play, utter something quite ridiculous:

“Back in 2007 of course,  Jimmy Rollins tied Goose Goslin with his fifth season with double figures in doubles, triples, home runs, and stolen bases…”

Only for his colleague to counter…

“… and don’t forget Bub, the record for fewest wild pitches in a season is held by an old-timer, Joe McGinnity of the NY Yankees in 1906 with zero in 340 innings pitched.”

Needless to say, they go on and on and on like this throughout the whole game. And yes, the gentleman’s club that is Test Match Special does tend to ramble itself to death about anything but cricket, so we’re not entirely blameless here. But at least they talk about things the casual listener can understand and relate to… chocolate cake, the pigeons strutting about near the boundary and the gentleman in the stand wearing a loud and rather grotesque sweater. Harmless. The other stuff will just give you a headache.

Football, however, has fallen in love with US-style statistics, ably typified by the anti-commentator himself, Clive Tyldesley. He is perfectly able to stir you from your slumbers as Manchester United play Neuchâtel Xamax in a meaningless Champions League tie by suddenly announcing something that this is the “…seventh time Paul Scholes has played against a Swiss side in Europe” or that “…the first corner given in the second half will be the two-thousandth United have been awarded in Champions League football, a record.”

Bring on the commemorative plaque. There’s probably been a book written about this already. The Joy Of Stats, followed up, inevitably, by More Joy Of Stats. Football’s great obsession.

Most of us will be aware of the important statistics that relate to Norwich City. I won’t reel them off here because you will know them. Record number of appearances made; highest goalscorer; most number of points in a season. But we cherish them. Because they relate to our club. Some seem set in stone, never to be beaten.

The largest attendance at Carrow Road for example, 43,984. Even the projected and very long term plan to rebuild the City Stand will not result in a contemporary Carrow Road capable of beating that record. Set in stone? Hewn into granite more like – and displayed atop an unclimbable mountain.

Likewise the record number of appearances made for the club-currently held by Kevin Keelan, 673 in League and Cup. Jaw dropping stuff. And unlikely to be challenged.

Adam Drury seemed to be here forever before his departure to strange lands this summer. Yet, even he ‘only’ made 362 appearances for us. Indeed, for Adam to have even had a chance of matching Keelan in the appearance stakes, he would, following his arrival in 2001, have had to have stayed at the club, playing regularly, until 2018.

Which puts both Keelan’s reliability and durability into sharp perspective. Astonishing stuff and, again, a record that is highly unlikely to be even remotely troubled.

Yet in amongst all this talk of club records, there is one in particular that the majority of us would like to see broken. Again, again, and, if you please, again. I’m talking, of course, about the record transfer fee paid.

There is a grotesque amount of money floating around football. Most of it goes just one way – down the nearest drain. However, despite the gamble that the buying club are taking when buying a new player, we all welcome the prospect of the club’s money being spent on someone, somewhere, from somebody else with gleeful abandon.

But this obsession that we all have with football transfers is hardly a recent phenomena – including  in and around the traditionally thrifty confines of Carrow Road. Bryn Jones for example. Norwich signed him from Arsenal in 1949 for the proverbial ‘undisclosed’ fee.

Prior to that, Jones had been a very controversial footballing figure. The £14,000 fee that Arsenal had paid Wolves for him was a world record at the time, and, at a time when the country was in the midst of a depression, the largesse of the fee caused questions to be raised in Parliament, the perceived vulgarity of that fee staying with him throughout his career.

Unsurprisingly, Jones remains the only player to have ever represented Norwich City who has been the subject of a world record transfer fee – so there’s an obscure footballing statistic to bat right back at our rounders playing friends across the pond.

The first £1 million transfer fee paid in English football was the one that took Trevor Francis from Birmingham to Nottingham Forest in February 1979. The seven-figure fee floodgates had now been opened and the record was broken again just six months later when Steve Daley left Wolves to join Manchester City for £1.47 million.

Which brings me back to my earlier point about all transfers being a gamble for the buying club. Francis, as it stands, was a success for Forest. Twenty-eight goals in 70 league games plus the winner in a European Cup Final. All that plus a profit when they sold him on to Manchester City.

Daley, like Francis, seemed a gamble that would pay off – 212 league appearances for Wolves, 38 goals. He had appeared in a UEFA Cup Final, won a League Cup Winners’ medal, and was a stand-out player with England ‘B’ team- six games, two goals. All this at a perceived ‘lesser’ club.

Fame, fortune and glory surely beckoned at Maine Road, he couldn’t fail, such was his reputation and footballing CV. But he did. Daley struggled for form and games with his England prospects subsequently evaporating. Two years and just 48 league games later, Manchester City cut their losses, selling him to US side Seattle Sounders for less than a fifth of the price (giving Bub another chance for a throw-away stat) they had paid for him.

The Canaries courted local controversy when it came to their first involvement with seven figure footballing sums. It related, not surprisingly, to a popular player, Kevin Reeves, being sold – the purchasers, again, being Manchester City.

Reeves headed north in March 1980 but, rather than it causing excitement around the club as to who we could buy with all that money (first through the door was Clive Woods, signed from Ipswich for £70,000 – a devil-may-care example of frippery by the Norwich board), his departure caused considerable fan rancor; the famous Barclay banner that read, ‘No Reeves No Fans No Future’ summing it up.

In dreadful hindsight of course, given the quarter of a century or so of willful selling that was to follow, it might have been wiser for the banner to have read ‘No [Insert Name Here] No Fans No Future’. It was the tip of a very large iceberg that was to follow, with plenty of said ice chinking merrily in the suits glasses as they toasted yet another sale – of which there have been plenty – over the years.

The Canaries were not as keen to spend seven-figure sums themselves, that once magical barrier finally being broken with the signing of Jon Newsome from Leeds in 1994 – fifteen years after Trevor Francis had shattered the mould. The capture of Newsome, astonishingly, remained the Canaries’ record transfer fee paid for 13 years, finally being broken with the ‘shutting the stable door after the horse has bolted’ capture of Dean Ashton in 2005. So it had taken a while – but we got there in the end.

But the transfer times, they are a changin’.  Reeves had been the forerunner of a mighty list of big name Canary departures, the habitual selling of our prized assets becoming something that the fans grew to accept as inevitable – if not acceptable.

We are, it won’t surprise you to learn, a club that has sold more players for over £1 million than most. Yet, in the last few seasons, that trend has most definitely ground to a halt – the last player to have made an unwelcome big-money departure from the club possibly being Robert Earnshaw, back in 2007.

Indeed, in recent years, not only has the Carrow Road trend been to spend (for us) big money, it has included holding onto those players and dismissing the offer of a large cheque (perhaps one we should have dismissed was David Strihavka?) in favour of retaining their services, paying them what they think they are worth and focusing on the football.

It’s like the club had finally come out of the worse hangover ever and stiffened its professional resolve with the strongest and most exquisite of coffees. And by all that’s good and holy, it’s been a refreshing change of direction.

Every player has his price of course. Just ask Manchester United with regard to Ronaldo. And we are no different. There may, one day, come a time when the price and prizes offered to us for someone like John Ruddy is just too enticing to turn down – for club, and, importantly, player alike.

You could never begrudge the opportunity for John to play at a top four side and have the chance of playing in the Champions League. I suspect, if that ever happened, he’d go with all of our best wishes – and in exchange for a vast amount of money. Unlike Darren Eadie, sold to Leicester City completely against his wishes as well as those of the fans.

And, in a week where we have been widely quoted as being prepared to spend £10 million on just two players, the chance for us to enjoy yet more club records and statistics seem to be on the horizon. Statistics, facts, and figures that not only mean a chance for the record books to be amended but also that this is a club that is on the up, ambitious and determined to succeed.

The designers of that Kevin Reeves banner can finally see a club with a future. Maybe we can finally consign it and the mentality that provoked it to the pages of history?

This was great! Have a listen back if you missed it.

Will do it again next Monday lunchtime.

With Rashica & Tzolis (loan) likely to move on in the summer, that’s two very expensive gambles that haven’t paid off. It happens, but the club must rectify this in the summer. Scott Twine or someone of that mould with be a decent start #ncfc