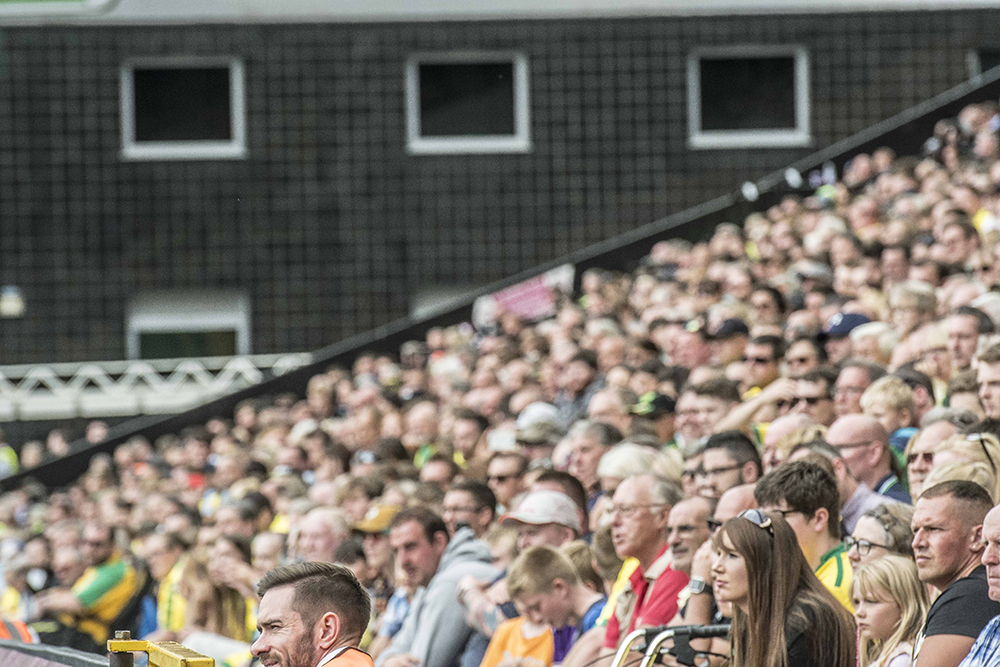 As I mentioned last week, find a Kev column and you’ll find a message that resonates … always.

In this little gem from 2014, on the eve of a trip to Craven Cottage (goes without saying that we lost), he touches on the impact a football crowd has on the outcome of a game – especially pertinent as the players prepare for a fan-less Carrow Road.

With the trip to Fulham coming up on Saturday (an oversight by the Football League computer, since we should surely be encountering our bogeymen on Hallowe’en instead of entertaining Bolton), I thought I’d mention that our hosts have been running an advertising campaign recently.

All over south-west London, there are large posters trying to drum up support for their home matches.

Now I’m not bringing this to your attention in order to instigate cheap, sneering chants of ‘You couldn’t sell all your tickets’.  After all, they’re likely to occur anyway.

Rather, it’s the premise behind the poster headline that I find interesting.

The idea is evidently that a large, passionate crowd can inspire a team to get a better result.  But is this actually true?

As supporters, we’d like to think it is.  After all, we’re the 12th man.  (Or so we were reminded at Carrow Road on one infamous occasion…)  Managers frequently praise the crowd for helping the team ‘get over the line’ in a close match.  And when there was standing on the Kop at Anfield, it was often said that the fans would suck the ball into the net at that end.

Some of us even try to convince ourselves that we can influence proceedings through superstitious rituals: lucky pants, lucky sweets, a lucky mate, a lucky route to the ground.

When you think about it rationally, that’s obviously nonsense – but we do these things because we enjoy the illusion of having control.  Or perhaps because we don’t like the idea of not having it; more than once, I’ve turned a deaf ear when my wife has asked why I allow something which I can’t affect – the actions of men I don’t even know – to dictate my mood to such an extent.  (More of her wisdom later.)

I suspect that vocal support doesn’t affect performances on the pitch as much as we believe.  It’s a factor, but a relatively minor one; in the case of Fulham, for example, any encouragement from the crowd at the start of the season would have been greatly outweighed by the malign influence of madcap cheesemonger Felix Magath.

Nor are we able to sway the referee very much, according to a study published last year by the Universities of Portsmouth and Wolverhampton; it concluded that modern referees are more resistant to crowd pressure than the officials in the past, as evidenced by the fact that there has been an increasing number of away wins in the professional game over the last 20 years.

Of course, there are some football matches which supporters aren’t allowed to influence: youth matches.

Our son, now 8, has started playing for a team this season, and all the parents have to sign up to the FA Respect guidelines (designed to address the behaviour of those parents on the touchline who show F.A. respect).

It’s basically a ‘happy clappers’ charter; we’re not allowed to do anything other than be positive and applaud.  And I’m totally on board with that, but my word, it’s hard not to topple overboard and shout out during games.

As I chow down on my tongue, I have to keep reminding myself that instructions from parents as well as the coach can be confusing, and that Harry won’t develop his decision-making on the pitch if he keeps getting told what to do.

I suppose that standing back, shutting up and letting them get on with it is a stage you inevitably reach with your children.  I reached it with our daughter last week when she sat a ridiculously competitive school entrance exam; the size of the crowd at the school wouldn’t have disgraced a League Two match, and I felt terrified for her.  But I was powerless to help and had to let her cope with the tests by herself.

We now have an anxious wait to see whether she’s made it through to the second stage – but as my wife says in her wisdom which I warned you about (and to be fair, in her professional experience as a deputy head), everything tends to work out in the long run.  That is to say, the innate ability of a child will come out in the end – assuming they apply themselves as they should – and they ultimately get the results they deserve.

I hope that’s true.  And hauling this column roughly back to the domain of football where it’s supposed to reside, I also hope it’s true of City this season.

Looking at our current squad, I don’t think there’s another club in the Championship with the same level and depth of quality.  The players and the management team are definitely applying themselves as they should.  And the club’s on a sound financial footing to boot.

Everything’s in place for success.  Nothing can be taken for granted, as the last two home games showed, but if the team carries on approaching games in the same way, there’s every chance it’ll all work out as we want it to.

To an extent, all we can do as supporters is sit and watch it play out like anxious parents, hopeful that everything will come good.  Being positive and applauding is fine, but we should try not to transmit our anxieties and impatience to the players.

And if there are things we’d do differently from the coach – such as dropping either Grabban or Jerome and reverting to the 4-2-3-1 which worked so well earlier in the season – perhaps it would be better if we just kept that to ourselves for now.