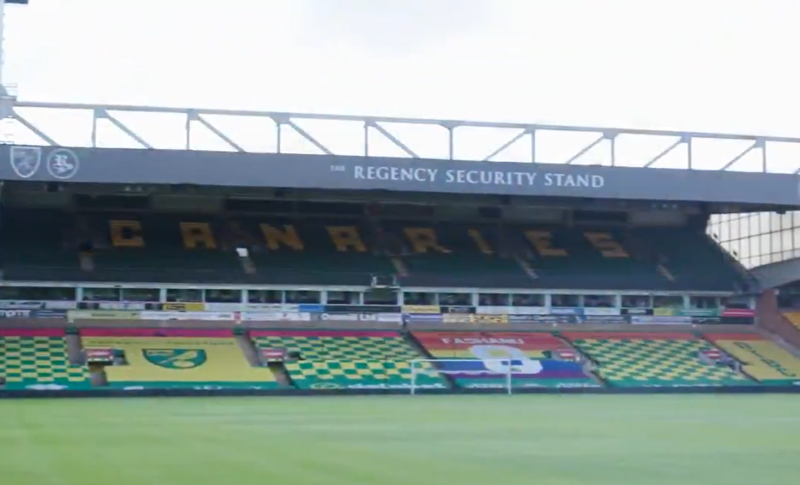 If only that applied to those of us charged with writing about our beloved Canaries.

This one is going to hurt, just as did watching those 94 gruelling, morale-sapping minutes last night. Just as it did to wake to the realisation it wasn’t just a bad dream and City really did implode on a national stage on a day when a win was the only show in town.

Shades of Craven Cottage, May 2005. But in an empty, soulless ground.

Of course, there’s mitigation in the form of it being one of the most surreal Carrow Road experiences ever, and the fact this was the the first time in three months that any of the players had kicked a ball of in anger, but that then begs more questions…

It goes without saying that Stuart Webber and Daniel Farke will be asking themselves those same questions in the debrief, just as Stuart will, quite rightly, be banging the not too high, not too low and ignore the noise drums.

And he’d be right. Overreacting to such an evening helps no-one, just as it was best to avoid the patronising tones of Bill Leslie and Alan Smith as they tip-toed around ‘plucky, sweet little Norwich’ and the inevitable onslaught that will come from a certain talkSPORT shock jock.

This is a pickle of our own making and one that we either fix ourselves or take on the chin. After last night, I’m almost certain it will be the latter.

At this juncture I normally scratch around for a few positives, but other than Tim Krul looking his normal self, a bright cameo for Adam Idah and a few minutes on the pitch for Josh Martin there were none.

A bright-ish opening 15 minutes brought with it two gilt-edged chances – one for Tom Trybull, one for Josip Drmic – and both were missed due to a mixture of rustiness and lack of confidence. Both chances, had they have fallen to Danny Ings, would have gobbled up.

In fact, and I hesitate to say it, had those chances have fallen to Saints player, my gut tells me they’d have been converted.

But it wasn’t just in front of goal that City looked miles off – it was in every single department, and that includes team selection and game management.

Farke’s decision to go with two up two by plonking Drmic alongside Teemu Pukki was, on the face of it, a bold one and was met with a he’s-going-for-it type reaction. Few complained.

But it took 20 minutes at the most to see that it wasn’t working. Farkeball, at its very core, is about keeping possession of the ball and working it patiently and deliberately through the thirds. It requires good technicians and it requires the ball carrier to be offered options.

Last night, with two up front, there were fewer options available to Krul, Ben Godfrey and Timm Close as they attempted to break Southampton’s energetic and well-executed press. They couldn’t do it.

All too often, if the ball did make its way to the feet of Trybull or Kenny McLean they were crowded out after a single touch, neither able to find enough space or a City team-mate with their second or third touch. It was a tough watch.

It was a bold experiment, but one that failed and hopefully won’t be repeated. In hindsight – yes, it’s a wonderful thing – for the first game back after such a long break, it needed familiarity and a system the players could slip into easily, without having to overthink it.

Drmic, in his defence, must have showed something in training that led Farke to hand him the stripes but he did little to justify his manager’s faith. He looked like someone who’d played precious little football, even before lockdown, which is precisely the case.

Timm Klose too – playing of course because Farke had literally no other centre-back options – looked like a player who’d not kicked a ball in a league game for nearly 18 months, which, again, is exactly what he was.

Rusty doesn’t come close, but through no fault of his own. As the minutes ticked by, the difference between physical fitness and match fitness became ever more apparent, as Timm struggled, along with nine others, to live with the pace, power and verve of a Southampton team that couldn’t believe their luck.

A midfield minus Alex Tettey offers limited protection to the back four even on a good day. When that back four is already creaking that spells double-trouble, and when that midfield is a man light then we’re in perfect storm terrain.

Trybull may well offer greater flexibility when we have the ball, especially when given time and space, but under no scenario does he offer that midfield the same ballast Tettey does, and allied with McLean, whose natural instinct is to join in further up the pitch, we came up woefully short in that critical area of the pitch.

Yet another aspect that will form part of the Colney debrief.

But it was more than just a tactical and technical horror show – it was the lack of apparent desire and hunger that hurt most. In some ways, we can forgive the technical failings – we’ve known all along that, in that regard, we have the least well-equipped squad in the league – but the lack of grit and the acceptance of their fate was what made it such an uncomfortable watch.

Farke spoke bullishly on Thursday of the nine-game mini-series his team were about to embark upon as they sought to save their Premier League lives, but there was no evidence of that message getting through to the players.

It felt wrong. Few expected a performance of that ilk. If we’re to go down, we want to see it happen with pride and with spirit. This had neither, and it shouldn’t need 26,000 voices reminding them of their responsibilities.

But, however you spin it and whatever the mitigation, there looks no way back from here. The three-month hiatus has changed little including, evidently, the players’ on belief in performing this little miracle.

And they told us the return of football would boost our morale.