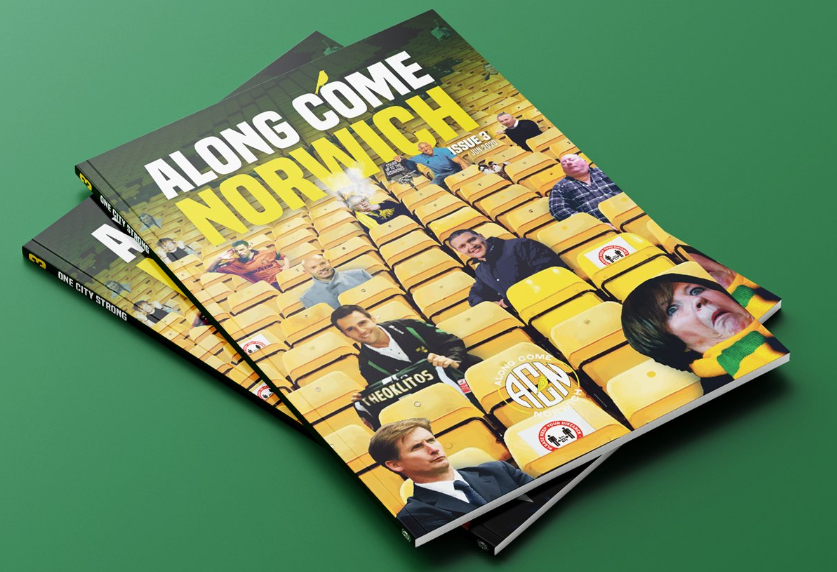 Our friends at Along Come Norwich have just launched fanzine number three. Having just read it, I can tell this one’s a corker (the first ‘chapter’ aside). If you fancy it, there’s a link at the bottom of this Q&A with the zine’s brains, Mr Jon Punt…

So… up to number three, Jon! This must confirm that numbers one and two were deemed successful? Numbers help up well?

JP: Yeah issue 3 has been in the works for what feels like too long now. We were on the cusp of starting to finalise content prior to the COVID outbreak, so it felt like the right time to bring it back as football returns.

Issue 1 was a complete sell out, so I guess if you have a copy it now makes it a collector’s item. Issue 2 did pretty well but we still have a few copies left. Luckily for your lovely readers we’re doing a deal where if you buy issue 2 and 3 together you’ll receive a pretty decent discount!

You mentioned in a tweet that you listened to feedback from the first two in the hope of making number three the best yet. What were the people telling you?

It’s mainly price. With all online content available generally for free, the print market is more competitive for sure, and we understand people have less disposable income available in these difficult times. So essentially we’ve dropped the price to £4 plus postage (£5.99). There might be a few people that baulk at that price too, but I’d ask them to bear in mind that we’re not doing this for profit, and with a low print run the margins are much tighter. Any profit made goes into keeping the fanzine sustainable, and flag displays/tifos at Carrow Road – we can’t say fairer than that.

What can we expect in #3? A little birdie tells me Flecky may be making an appearance? What else is there to titillate the faithful?

Yeah Flecky makes an appearance and as you’d imagine has some great stories from his two spells at the club. In addition, we’ve assembled some of the best writers around on the City scene, while we were also really excited when author Daniel Gray (of ‘Saturday, 3pm’ and ‘Black Boots and Football Pinks’ fame) agreed to contribute. Mr Nodge, Chris Goreham has written a piece and there’s a couple of fantastic articles about mental health from Maddie Mackenzie and Hannah Shaddock.  Also, the cover, a brilliant homage to Cold War Steve by Ben Stokes, is worth the price alone.

Obviously I’m really biased, but this is one of the best things ACN does, so clearly we’re keen for it to have as big an audience as possible. People have worked tirelessly on it, especially Stephen Lister and Ffion Thomas, so a huge thanks to them.

In terms of ACN, you’re now Lawny-less. Are you at liberty to say nice things about him and the role he’s played in making ACN what it is? (Go on… 🙂)

Andrew Lawn is one of the most self-confident people I know. Like, to ridiculous proportions. He will back himself in any scenario. Some could mistake that for arrogance, but he is an excellent human being. That self-belief has taken ACN to some brilliant places, there’s no way we’d have had Delia and Michael on the pod without his cheeky charm, plus his ability to push his luck has helped the flag cause no end.

He’ll be missed, and we hope he’ll be back.

It’s great that the club have allowed you to decorate Carrow Road with the flags and banners – some familiarity for the players even with the ground empty. Any more plans further down the track that you can share with us?

In terms of this season, we felt like all we could do is focus our efforts on making sure the Carra was as much of a sea of yellow and green as possible. There’s still a chance to contribute to that with the scarves scheme the club is running.

Beyond that, we clearly want to mark the return of supporters back into the ground in a big way. We had something really special lined up for the quarter final, and what I understand would have been a Premier League first for the home game against Southampton. So, yeah, plans continue and we don’t really want to stop until we’ve exhausted all avenues. The ultimate aim is to have the kind of tifos you see as commonplace on the continent, and we’re a way off that.

Any little miracles about to occur?

No. Well, maybe. It’s all about a fast start, isn’t it? If we can somehow sneak 4 points from those first two home games, while others above us slip up, then it’s all to play for. I’d rather be chasing than looking down with fear. Hanley’s absence feels significant though, he was really playing himself into his best form since he’s been at the club, and set piece issues had almost been eradicated because of his presence.

In summary, I have no idea. Anyone pretending they do is lying because we’re completely into the unknown now. What I can say is by judging the midweek ‘experience’, it’ll be a fairly soulless way to play out the season.