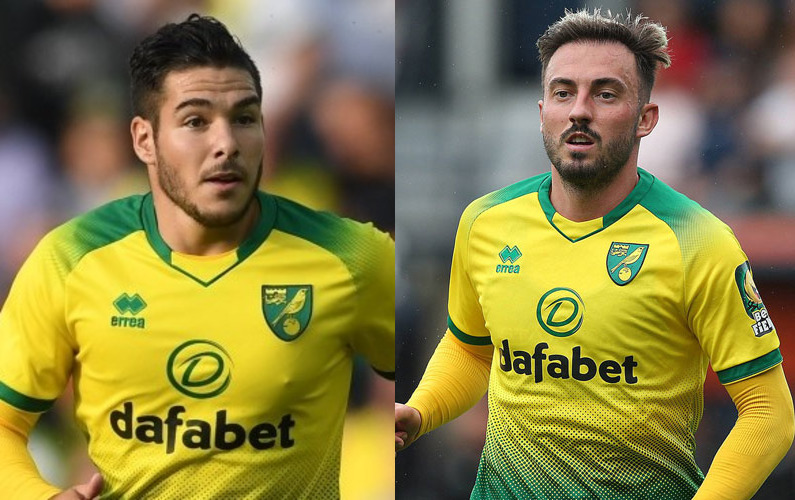 ♫ I had a wheelbarrow, the wheel fell off… ♫

So sang the NCFC fans, and never had it rung truer.

Okay, so by NCFC I mean Notts County, and I’m not even sure it’s a song they sing anymore, but for one day only – maybe one season only – it should replace On the Ball City as our anthem of choice.

I mean, short of a lubricated Delia phoning in at halftime, demanding control of the Carrow Road PA and berating the flags and banners for not making enough noise, or Kevin Friend and Sean Dyche embracing at the final whistle and duetting in a version of I Got You Babe, I’m not sure how much more surreal yesterday could have been.

We’re truly in if you don’t laugh… territory, although I admit I did feel like crying.

Unlike most of the Canary Nation it seems, I couldn’t even get angry with Emi Buendia or Josip Drmic. It feels like we’re way beyond digging out players and staff for doing something a bit daft.

It’s not like it’s the first time bad decision-making has cost us this season.

I made the mistake of listening to Radio Norfolk at halftime and poor Rob Butler was apoplectic with rage; stopping only one step short of demanding Drmic be put in stocks on the steps of The Forum, with Darren Eadie piling in, citing the irresponsibility of getting yourself sent off while admitting that he too had been shown red while reducing his team to nine.

We’re fully through the looking glass.

Of course, both City players acted irresponsibly and will have both regretted their actions probably a second after they had done them, but neither offence was of the life-threatening nature that some would have us believe.

Stupid? Yes. Naive? Yes. But neither went out to deliberately injure their opponent.

Buendia was reacting, in a Buendia way, to a foul and a deliberate niggle from Ashley Westwood, and Drmic’s was a wild lunge for a ball that was running away from him. Despite Eric Pieters’ howling like a banshee, only minimal contact was made.

Minus the amplification from Dyche and the Burnley bench, and some top drawer professionalism (as it’s been described) from Westwood and Pieters, neither Buendia or Drmic deserved the stocks. And for us twice to be on the receiving of the only three referee VAR referrals, is a little bit of a joke.

Slow motion replays for the referees, which it’s widely acknowledged makes every offence look worse, are daft but still okay if the recipients are Norwich City.

But, before the usual suspects start shouting at me, both offences by the letter of the law were worthy of red cards. That I accept. I’ll leave it there.

That Chris Wood – surely one of the most technically limited centre-forwards ever to grace the Premier League – would, on the stroke of halftime, twist the dagger by virtue of his shin merely compounded what was probably the grimmest ten-minute spell of the grimmest season imaginable.

The Clarets’ technical limitations were further exposed in the second half when, faced with nine men, they proved themselves pretty clueless, just as Dyche proved himself to have the tactical dexterity of Mike Bassett.

But, in fairness to them, it was job done, just as a top-half Premier League finish is job done; something we can only dream of. They are apparently, just as Charlton and Southampton were before them, the model we need to follow, although I’m not sure if, personally, I could stomach Dycheball every week.

(I’ll sshh now… the bitterness is starting to seep through) 😊

But it was a sterling effort by the nine men – that much we can applaud – and when the two banks of four were breached, Tim Krul’s magnificence continued to shine like a beacon in that otherwise desolate landscape.

Alex Tettey too shone as the older heads helped steer the ship, cajoling and coaxing the younger players through an experience they’re unlikely to have encountered before.

Christoph Zimmermann too was magnificent, especially in the circumstances – i.e. not expected back until next season and next-to-no match fitness.

Of course, there would be one final twist – why wouldn’t there be – and it came in the form of Ben Godfrey, under no pressure, mis-controlling one past Krul’s left hand. At least it gave Dyche the chance to unleash one final, visceral roar into the evening sky.

But, let’s not forget, it’s apparently hellishly difficult playing against nine, so says the Sky commentary duo of Rob Hawthorne and Efan Ekoku. Both expressed sympathy for poor Burnley, who had to overcome the nightmare of having two extra players on the pitch.

But, hey, we’re in the realms of fantasy right now. I’m loathed to say it, but everything that could conceivably gone wrong this season has gone wrong and we’re stuck in that horrible position of being betwixt an embarrassment and a laughing stock.

Those who have been in our sights over the past few season are, quite rightly, making hay and we have no ammunition with which to fire back. We have to take it on the chin.

It’s been a disaster, an unmitigated disaster, and while those who say we need to experience the tough times – like now – to be able to fully embrace the good times are spot on, in the here and now that’s no consolation.

I just want this $hitshow of a season to end.