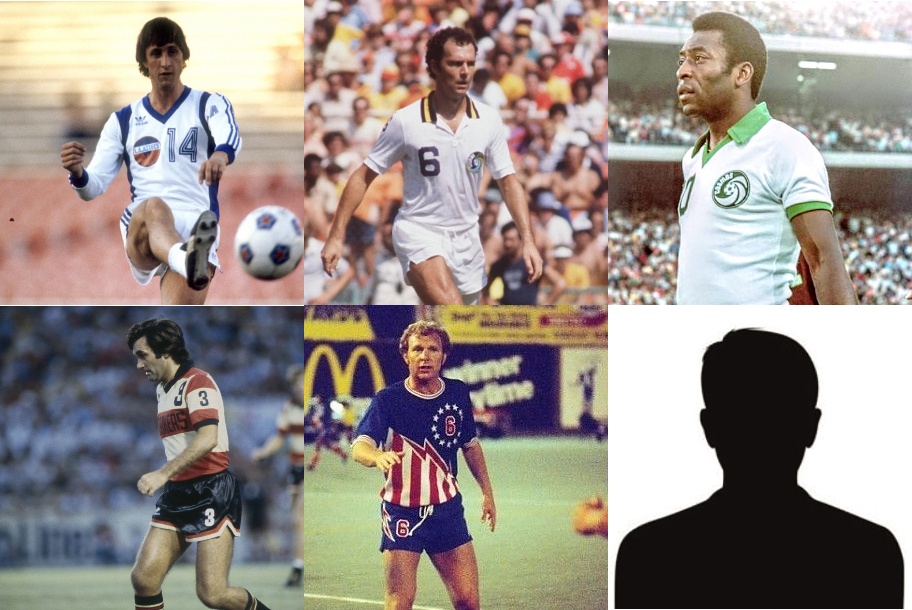 First we need to consider England’s win in the 1966 World Cup. Importantly, it was a tournament enjoyed by a global audience on television – even in the famously soccer-shy United States.

Sensing the American public may finally be ready to embrace the beautiful game, the US money men immediately set about creating the North American Soccer League (NASL).

The NASL opened with its first season in 1968 and was heavily-promoted by CBS in an attempt to become an established and successful part of the North American TV sporting schedule. The US league used money and glamour to attract a multitude of world stars to the States.

Although average league attendances only reached about 3,000 in the early years, crowds improved and several games during the peak 1970s years attracted well over 30,000 people, with New York Cosmos holding the record for the highest attendance of 48,000 in 1979.

In addition to the headline acts, many other professional players from the UK made their way across the Atlantic, including an avalanche of players from Norwich City (see list at bottom of the page) who often used the close season to pick up extra income playing Stateside.

So, back to the question, which former Norwich City player shared the same footballing award as Johan Cruyff, Franz Beckenbauer, and Pelé?

In 1977 the MVP went to ‘The Kaiser’ himself, Franz Beckenbauer.

And in 1976 it went to simply the best player in the world, Pelé.

It was Baltimore Comets (and ex-NCFC) striker… Peter Silvester.

Silvester was a more than useful centre-forward, scoring 14 goals in 18 games for the Comets that year and justly earning the MVP award. The popular Silvester’s record wasn’t too shabby for the Canaries either scoring 37 goals in 100 appearances between 1969-73 and helping secure the boys in yellow their first crack at the top league in England in 1972/73.

Sharing the award with Cruyff, Beckenbauer, and Pelé must have been a real coup for Silvester. Utterly brilliant in fact. He could not have wished to have been in more exalted company.

The modern equivalent would be a former NCFC striker (let’s say Dean Coney) clutching a cup and sharing a podium with Kylian Mbappé, Cristiano Ronaldo, and Lionel Messi while being sprayed with champagne. Astonishing.

There was joy for other Carrow Road alumni during this period too. Ex-City midfielder Trevor Hockey was signed to Las Vegas Quicksilvers in 1977 and played in the same team as Portuguese legend Eusebio. That’s Eusebio by the way. One of the best footballers ever. Fantástico.

Of separate interest maybe, some other NASL players of the time went on to manage successfully in England. They include gruff ’n’ tough Sam Allardyce (who did very well at Bolton and briefly managed England in 2016); Hampshire Scot Bruce Rioch (who managed NCFC between 1998-2000); John Faulkner (who was NCFC assistant manager to Mike Walker from 1992-95); and Harry Redknapp (Tottenham and West Ham manager – and ex-NCFC triallist and reserve team player during the 1973/74 season. Yes, really.).

But for kindness’ sake, let’s not forget the violet end of the spectrum over the border and remember those stars from the ITFC golden age who made it there too; Alan Brazil, Brian Talbot, Frans Thijssen, and Trevor Whymark. Excellent players all.

While we’re talking football in the US, what about the heavily body-armoured, grid-iron, egg-shaped ball kind?

Perhaps you remember an Anglia TV news item in the 1980s about ex-City defender Phil Alexander who’d moved to the States to be a kicker for one of the big NFL American Football teams?

Alas, much-missed Peter Falk isn’t around to help us solve the mystery, but perhaps you can? Do you know how Phil Alexander got on?