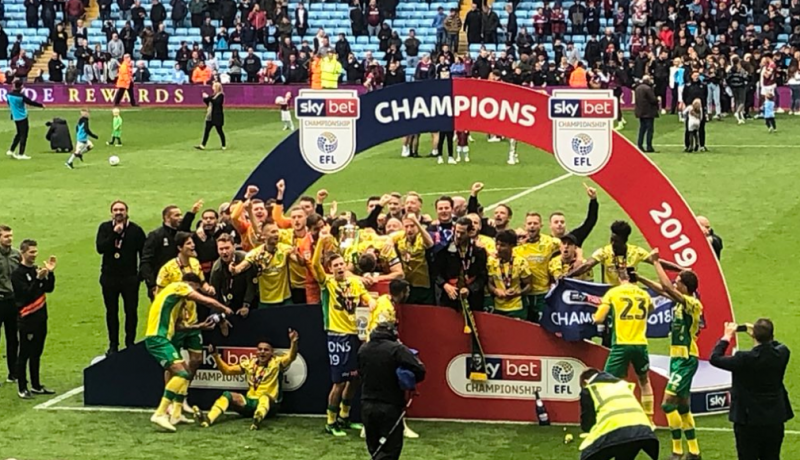 So, how do you get promoted?

The best guide to the future is always the past; so, as Norwich City have been promoted to the Premier League four times, if we explore what went well on those occasions, we’ll have a better idea of what might work again.

But first we need to explore the context. Here’s a record on Norwich’s performance in the second tier over the past 25 years…

Mmm. ‘A bit up and down’ doesn’t quite do it justice somehow. ‘Roller coaster’ is a cliche; ‘frog with hiccups’ is just… well, a bit weird; so let’s just stick with ‘inconsistent’.

However the overall trend – apart from the middle five years ending in (cough) League One – does seem to be heading upwards.

I’d put that resurgence at least partly down to the young NCFC fans and fan organisations (you know who you are) who have added all sorts of energy and joy to match days and elsewhere. And we hope soon to have the platform for them to return to Carrow Road and continue to make matchdays the events they deserve to be.

Well done to everyone involved. You do make a massive difference.

But there’s also the other main elements; the manager, the team, and – most importantly – the results.

NB. The chart covers promotions to the Premier League only. The data includes league matches and play-offs (where applicable) but does not include any cup games.

Nigel Worthington got us promoted as champions in 2003/04. Paul Lambert gained automatic promotion finishing second in 2010/11. Neil Adams kicked off the 2014/15 season but selflessly handed the reins over to Alex Neil halfway through who finished third and took us into the Premier League via the play-offs.

And in 2018/19 Daniel ‘Diamond’ Farke achieved a North Rhine-Westphalian miracle by topping the Championship and sending us hurtling into the money-munching maelstrom of the Spiffy League once again.

Our gratitude to you all.

But what did they do to make it happen?

Alex Neil had the best win percentage triumphing in 68.0% of games played. He equalled that distinction by losing the fewest too: only 12.0%.

Daniel Farke came out top in most goals scored per game at 2.02. But Alex Neil again won again when it came to being miserly in defence, conceding only 0.84 goals a game.

Comparing these best figures with the rest, which were also good enough for promotion, the stats do seem to suggest there is a sure-fire level of performance to ensure success. Those Four Golden Rules are:

Now for the easy bit… How do you actually do that?