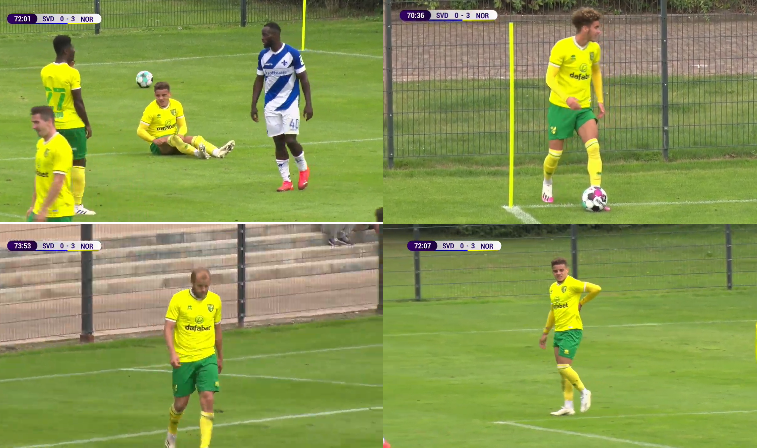 It’s not often you get the chance to watch almost four hours of City playing live, so it would have been rude not to… even if their were friendlies.

That the club was even able to field two full-strength teams without relying on some under-23s is an achievement in itself – but they did, even if some players straddled both games.

That neither match reached humdinger level was the trade-off, but that’s not to say they weren’t useful. They were. Both games served their purpose and rounded off nicely a pre-season like no other.

And with 15 players off on international duty next week, and therefore unavailable for next Saturday’s Carabao Cup season-opener at Luton, there was an extra edge for those who’ll be left behind.

As Daniel Farke was at pains to point out yesterday, a successful pre-season counts for nothing when the real action begins and a series of friendly wins have often been the precursor to an opening day humbling – ask Gunny – but this was a little different.

While ten new faces have arrived to lift the mood around Colney – and it seems they have – the majority of the squad are still tainted by that Premier League nightmare and the losing mentality that engulfed it.

A series of underwhelming performances and/or defeats at Colney and in Germany would have added further doubt, both in the minds of those in the inner circle and those of us watching from afar.

So, while I’m usually quick to dismiss the wider relevance of these games, this time around it mattered. Four wins and a draw with only two goals conceded will hopefully have laid to rest a few of the ghosts of Project Restart – a phrase that will forever be accompanied by a furrowed brow.

But while the team for Luton almost picks itself, for the reason stated above, there are plenty of difficult decisions for Farke and co ahead of the trip to Huddersfield, with, as ever, an expected name or two appearing in the frame.

One of those of course is Josh Martin, whose free-kick in game one was of a Vrancic vintage – and there is no greater compliment.

But it wasn’t just about the free-kick – as spectacular as that was. There was also an air of confidence and belief that wasn’t apparent in those brief cameos at the end of last season, maybe because they were so brief.

And while it’s too early to be hailing him as the academy breakthrough player of 2020-21, we now have another bonafide wide option on our hands, to compete with Onel Hernandez and Przemyslaw Placheta. And the way the senior players stepped aside to let him loose on that free-kick told the story of someone who does that regularly in training.

He’s likely to start at Kenilworth Road and a good performance there will put him well and truly in the mix for Huddersfield.

Oliver Skipp is another who put himself in the frame for the first league game – he’s one of the 15 missing for next Saturday – and so far looks to be everything that Tottenham fans promised us he would be. That heady mix of being combative while also being able to pick a pass is just what’s been needed at the base of that midfield, and with Jacob Sorenesen also offering something similar, the surgery undertaken by Stuart Webber in that area of the pitch looks promising at the very least.

The one area that’s as yet to be addressed, and which is the one in most dire need of improvement, is of course in central defence. And still it creaks.

As has been said many times, the defensive issues prevalent when we won the Championship and further highlighted in the PL are not solely around the personnel, but also pertain to how we defend as a unit – and the aforementioned surgery in front of the back-four will help – but if ever an upgrade were needed.

The same old failings are still there I’m afraid, and minus Grant Hanley or a refresh in the form of Akin Famewo – both of whom are injured – the need for a new face remains.

Work is clearly still ongoing to address this – with Burnley’s Ben Gibson still the number one target – and let’s not forget the transfer window remains open until October 5, but even with new reinforcements in front of them, the same mistakes are still happening and will continue to happen.

Let’s not head into this new season with the sole intention of outscoring every opponent as we did in 2018/19. A few clean sheets (when it matters) would be nice.

But, as best you can tell through the prism of YouTube, the Premier League hangover appears to have dissipated and that can only be a good thing. And in addition to those mentioned above, there were plenty of positives to emerge. Such as…

So, not long to wait now. Back before it’s barely finished. And we look in decent-ish shape.

I hate being optimistic, but I can’t help it.