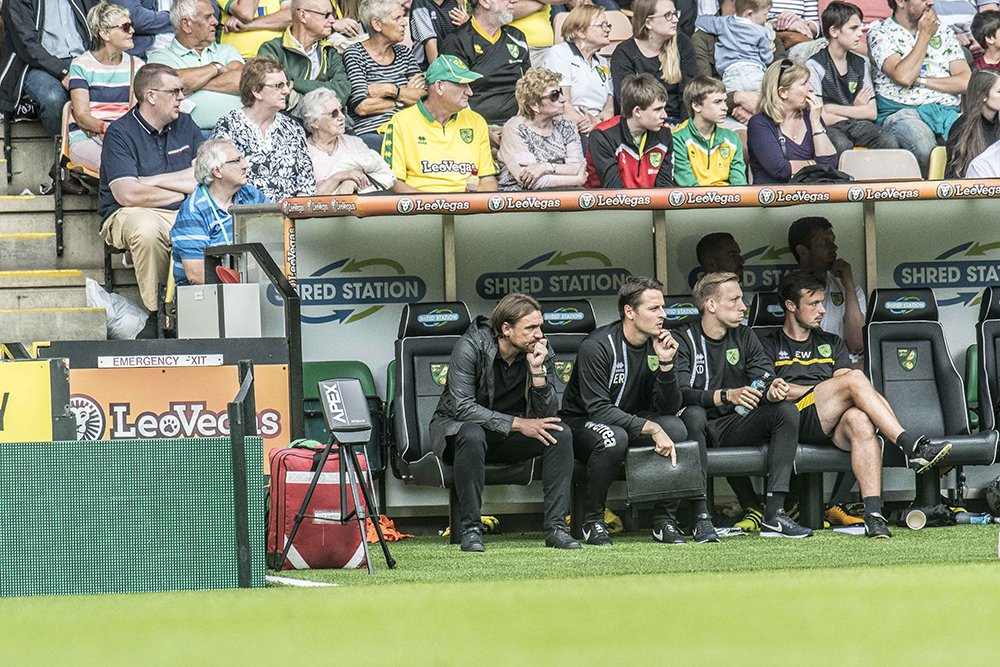 Despite not being the return they would have hoped for – or expected – the first international break appears to be an apt moment to reflect on every goal City have been involved in thus far.

I’ve analysed their defensive and offensive performance, starting with the 1-0 win against Huddersfield.

Regardless of the fact there was just the one goal in this game, there are two aspects I have highlighted prior to Adam Idah opening the scoring which offer promise: offensive pressing and forward runs.

If we focus on Teemu Pukki for a moment, he’s already predicting that a fatigued Richard Stearman won’t get the requisite power on a back-pass, which would have to travel half the pitch to reach its destination.

Todd Cantwell and Idah are blocking off the forward passing lanes, meaning the inevitable back-pass happens.

This is when Pukki pounces.

When the goal-scoring opportunity has presented itself, City have a three-on-one.

There has been much discourse around how Norwich introduce altered patterns of play to their game and the benefits they provide.

Being a more dynamic unit lends itself to productivity on the counterattack, as evidenced by their opening goal of the season.

I have already covered this game in extensive detail previously, but the aim here is to solely focus on the goals.

Scott Sinclair opened the scoring from the spot, but as I mentioned in my in-depth analysis of the game, while it was a questionable penalty, Oli Skipp is ultimately at fault for allowing the Preston attacker to get the run on him.

It’s a teasing delivery from Xavi Quintilla, much like his previous two crosses prior to City’s goal.

Pukki’s movement between the Preston defenders provides him with the space to get his header on-target, even if Norfolkonian Declan Rudd made a meal of it.

It’s another defensive error – this time by City – that saw Preston go ahead.

Ryan Ledson is afforded the time and space to thread a pass into the path of the on-running Scott Sinclair, piercing the Canaries’ defence in the process.

As Max Aarons and Skipp both take steps away from the ex-England international, he runs through on goal with his rebounded shot falling to Darnell Fisher who slots home.

Norwich’s first equaliser came from a cross. So did their second.

Eventually falling to Przemyslaw Placheta, it’s Aarons’ delivery that creates the opening – again, showcasing Norwich’s desire to be more proactive with deliveries from out wide.

It’s likely that Placheta will be the one serving the crosses, as opposed to thriving off them, but it’s an emerging pattern.

The easy option here is to focus solely on Christoph Zimmermann for his involvement in Arnaut Danjuma’s opener. It was questionable defending, at best but I’m willing to give the German the benefit of the doubt.

With Zimmermann’s physique and skillset, he has to be at full capacity to keep up with the speed of the Championship. It’s understandable that at that moment, he wasn’t quite there.

But, while on the topic of centre-halves, I want to refer back to a previous point.

I’m talking again about the benefits of a left-footed centre-back. Notice how both Zimmermann and Ben Godfrey fail to deal with an awkward aerial ball.

Zimmermann heads it down for Godfrey to clear.

But due to the Bournemouth press, the pass has to be played with Godfrey’s weak foot.

This allows Bournemouth to win the ball back in the City half.

I’m not suggesting that Ben Gibson passes straight into the path of a Norwich player, but the attempt would no doubt have been far more convincing than Godfrey’s.

This was the Canaries’ first televised game of the season. I found the post-match analysis aggravating at best.

The whole narrative was around Derby’s exemplary defending, but the panel also had a lengthy discussion about footwear.

Ultimately, if Pukki doesn’t slip, the whole feature is flipped on his head.

What I try to at least do, is analyse the performance, not the result.

In my post-match analysis article, I evaluated the game, as opposed to a sole focus on the only goal, but will just make a general point about Lukas Rupp’s involvement, as opposed to focussing on Tim Krul’s positioning for Wayne Rooney’s free-kick.

… but hindsight is a wonderful thing.

Instead of using this as another stick to beat Rupp with, I want to highlight the impact he had on the game and why he, at this moment in time, is City’s most productive number 8.

Not only is Rupp proving to be a combative, destructive midfielder, as we all presumed he was, he’s also adding a touch of progression and technicality to his game.

Kenny McLean has been too frenzied and inefficient with the ball, and while Mario Vrancic can be a useful option from the bench, Farke seems unconvinced with the Bosnian’s lack of physicality to last the whole 90 minutes.

Providing there isn’t a late flurry of transfer action, City’s back four appears to be settled and in Oliver Skipp, Rupp has a midfield partner capable of protecting the defence, allowing the German to impact the game further up the pitch.

The jury is still out in terms of the front four, however. An eleventh hour move for one of City’s prized attacking assets would only exacerbate the issues at hand for Farke.

But while there are reasons to be uneasy regarding off-field issues, the signs are there to suggest this side will improve in weeks to come.

Farke will have to tread carefully, but City’s head coach certainly deserves time to prove he is the man to lead Norwich forward.

Quite how long he has left to prove this, is still up for debate.