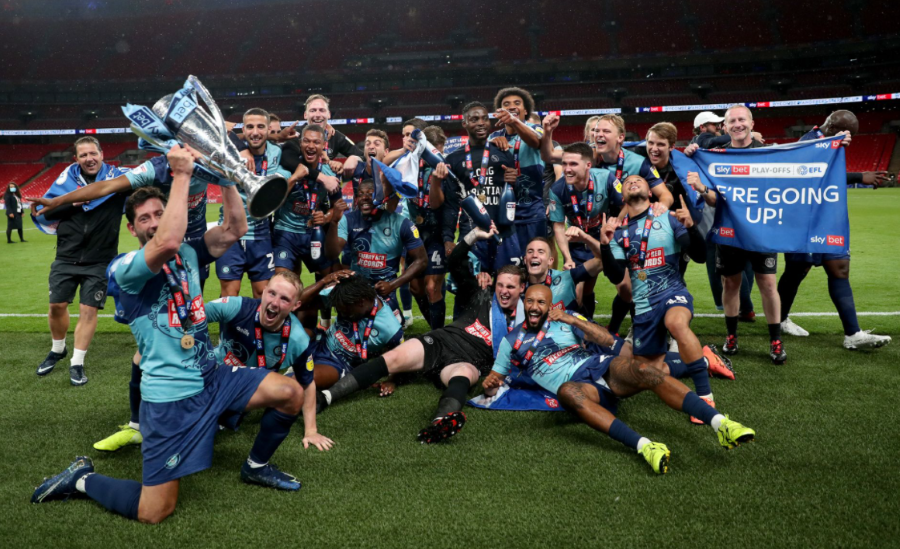 Next up are the League One playoff winners, Wycombe Wanderers.

You have to feel a bit sorry for Wycombe. The final at Wembley would have, should have, been the biggest game in the club’s history. Especially as the 2-1 victory came at the expense of near neighbours Oxford United.

The fact no fans were there to witness such a significant game is a massive shame but it does not take away the achievement and anticipation of exciting times ahead.

It’s their debut season in the second tier and, like Burton and Yeovil before them, this league will be all the richer for having a new face, an underdog at the Championship table.

It’s no surprise that this season is only the second in Norwich’s 119-year history that we find ourselves in the same league as Wycombe. We have only played the Choirboys four times. The fewest in the ‘we meet again’ series and as such I’ll revisit all four games.

The first meeting was probably the most significant of the four. A third-round FA Cup meeting on 8 January 1994. I was one of the few thousand that headed to Adams Park, an opportunity to visit a new ground and an afternoon back on the terraces.

It was a game played in the backdrop of Mike Walker’s shocking and controversial departure. The Walker reign was a short but memorable part of City’s history. For many, his one and a half seasons were the best, most exciting – the finest ever.

Walker left for Everton, a club that he hoped would match his ambitions. You could not blame him for leaving but it was painful for the Yellow Army and, as such, he took some stick in the Adams Park away end.

On the field, it was business as usual as Chris Sutton scored twice in a comfortable 2-0 win. It didn’t seem it on the day but City’s trip to Wycombe would mark an end of an era. Norwich had never had it so good again.

There is a further sub-plot to that first meeting.

Amateurs since 1974, Wycombe FC had only played at a national level from 1985. After knocking on the door, they were finally promoted to the Football League in 1992/93 and then again to Division Two (now League One) in 1993/94. This period of glory came under the management of Martin O’Neill, a man with strong Norwich City connections.

Initially a loan signing, O’Neill helped catapult Norwich to promotion in 1981/82 before signing permanently to help the club comfortably survive the following season back in Division One. He scored in a famous 2-0 win at fortress Anfield, one of 13 goals in total in 75 appearances.

With his Carrow Road connection combined with his ambition and successes in Buckinghamshire, it was no surprise when in the summer of 1995, O’Neill was appointed City manager tasked with leading the club to promotion after their Premier League relegation.

If the first game against Wycombe marked the end of an era then our first-ever league meeting would mark the start of Paul Lambert’s dynasty.

Lambert’s appointment is well documented after City’s awful start to life in League One. After watching his new side lose to Brentford from the stands his first official game in charge was the home fixture versus Wycombe on 22 August 2009.

His impact was instant with Norwich storming to a 5-2 win. The game also marked the first league goals and the first at Carrow Road for a certain Grant Holt. The win was crucial, a first of the season after a difficult start and one from which City never looked back.

By the time Norwich visited Wycombe in the depths of winter, they were top of the pack, a position strengthened by a 1-0 away win – this time Korey Smith on the scoresheet. It was the third in eight consecutive league wins. The march to promotion and the title was in full swing, while for Wycombe the opposite was true with the season concluding in relegation.

The last meeting versus Wycombe came under Daniel Farke’s watch in the now legendary 2018/19 season. To complete the set, this game came in the EFL (League Cup). This one symbolised Farke’s City team scoring and conceding heavily. As often that season, Norwich emerged the right side of a high scoring affair, beating Wycombe 4-3, thanks to a hat-trick from popular loanee, Jordan Rhodes.

So there you have it – four meetings and four Norwich wins; 12 goals scored with five conceded. Our only 100% win record against current Championship opponents and one City will be expected to extend.

Allan and his mate Val have also turned We Meet Again into a podcast. The Wycombe edition is here...

This was great! Have a listen back if you missed it.

Will do it again next Monday lunchtime.

With Rashica & Tzolis (loan) likely to move on in the summer, that’s two very expensive gambles that haven’t paid off. It happens, but the club must rectify this in the summer. Scott Twine or someone of that mould with be a decent start #ncfc