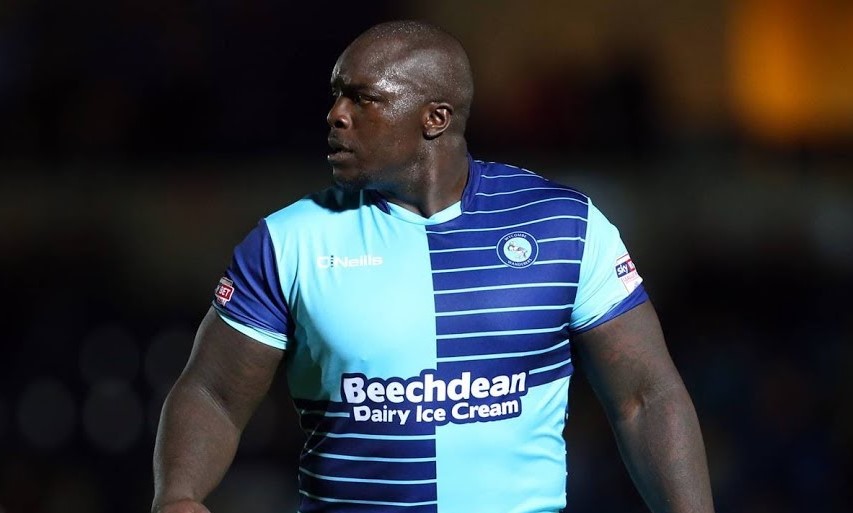 Well if ever an MFW preview was made for me this is the one. Which is probably why I volunteered for it in the first place.

Now how does a singer in a half-decent rock ‘n’ roll covers band who plays [apparently – I couldn’t confirm it at time of writing] a bit of rhythm guitar too find the dedication to put his management jacket on virtually every day to oversee his other group of brothers in arms?

He does so of course because he is my favourite football manager of this era. He’s Mr Gareth Ainsworth.

Why do I love him so much? Because he successfully combines the two greatest loves of my life [sorry, Sue, sorry dogs, sorry kids

] as in rock and football.

Are his band, the Cold Blooded Hearts, any good? Yes – they certainly sound okay on the few clips I’ve seen on YouTube but I reckon they’re four lads trying to have fun more than anything else.

They’re certainly more Dr Feelgood than Pink Floyd but who cares – they ostensibly enjoy themselves on stage. Take a look at the link at the end of this preview – they ain’t too bad.

But how are Gareth and his other band of merry men coping in the Championship for the very first time?

Not so well I’d venture to suggest, with some of their supporters railing against Ainsworth’s apparent *we’re lucky to be in the Championship and we’ll make the most of it* stance. Chairboys fans, like all football supporters, want more than that.

It’s looking a bit bleak just now for Wycombe Wanderers, of course. Pointless in six matches having scored just once, they are only kept off the bottom by that naughty Sheffield Wednesday, who were deducted 12 points before a ball was even kicked. A 0-1 against Berkshire rivals Reading won’t have done their confidence much good either.

The perfect opportunity for an along come Norwich moment, of course.
We’ve got one or two connections with Wycombe as Allan Kemp has pointed in his fine *We Meet Again* series. Martin O’Neill and Paul Lambert of course.

A healthy managerial hunting ground and quite possibly two of the finest managers – via Colchester in Lambert’s case – we have ever possessed even if both left us with a sense of [justified] frustration.

And then there was the five-foot-six enigma that was Anthony McNamee. He came from Swindon, was a bit-part player under Lambert and had his own song as in: McNamee, McNamee, he looks f***ing good to me.

He hit an absolute belter against Stockport back in the day that I’ll never forget as we won 2-1 at the Carra.

One or two clubs later he ended up at Wycombe. Much-travelled wasn’t in it for our Anthony.

I nearly, so very nearly, went to Adams Park around 20 years ago for an FA Cup match. For once I was forced to work the weekend at short notice and never made it but we won 2-0 and my mate got me a consolation programme for missing the trip. He said the ground was in one of the best settings he’d ever seen as in it’s surrounded by woodland and all that.

But what do we know about Wycombe in the here and now?

I can honestly say I can only immediately recall one player of theirs and I would imagine 95 percent of MFW readers will be with me on this.

Yes, it’s *The Beast* aka Adebayo Akinfenwa. We all know him cos he’s been around forever [he’s now 38] and, oh boy, he’s not for faint-hearted defenders.

He recently said that he doesn’t like it when folks postulate about his weight. As he said it exclusively on social media I have no idea of his exact words on the subject but I do know he was Wycombe’s player of the season in 2017 and that he’s also their all-time club record goalscorer with 54 goals.

Let’s hope he doesn’t come up with my previously-pondered along come Norwich moment on Saturday. It’s unlikely but by no means impossible, of course.

For anybody expecting an easy ride tomorrow – please don’t as you might be disappointed.

Anyway, have a quick listen to Gareth and his Cold Blooded Hearts boys. He’s open about his musical tastes.

Daniel Farke? He could favour anyone from Metallica to Mozart by his appearance and demeanour but if we can have three points tomorrow he could be into the Bay City Rollers or East 17 for all I care.