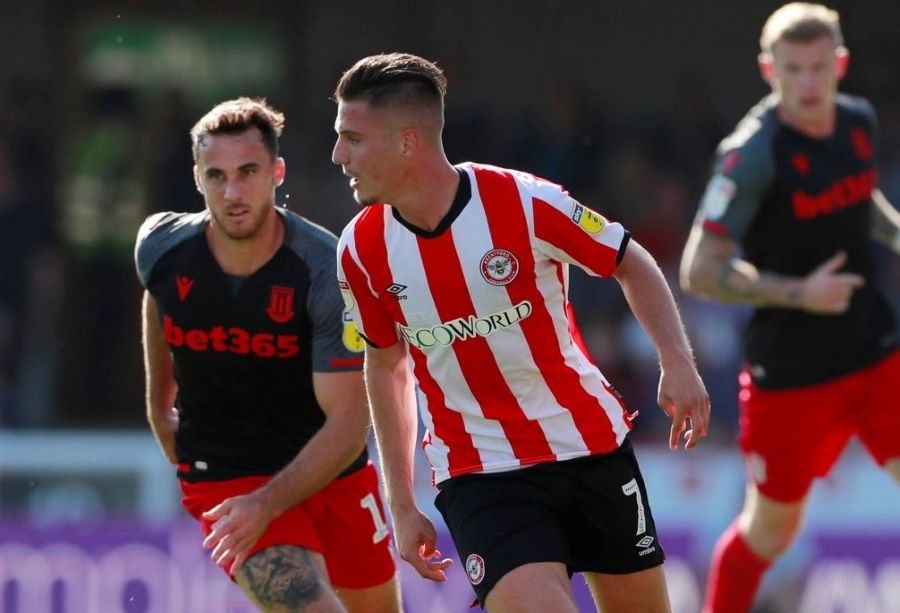 Tonight we enjoy a trip to one of our oldest rivals, Brentford FC. One of London’s less fashionable clubs, The Bees are on the up with a new stadium off the pitch and an exciting young team on it. They have been in the promotion mix for the last few seasons and all under a young, ambitious foreign coach installing a thrilling brand of attacking football. Something that will resonate with our club.

Brentford were elected to the Southern League in 1898/99 and as such, they faced Norwich in our first-ever season at that level, 1905/06.  Strangely, in each season, up to the start of the First World War, there was never a gap of more than four places between us in the final league tables – two clubs on a very similar level.

With both elevated to the Football League after the war’s conclusion, we remained regular opponents throughout the 1920s with the first League meeting a 0-0 draw on 9 October 1920. It would take City six attempts before recording our first win. That win, an impressive 4-1 away from home, was a rare victory with Norwich winning just four of the 19 games played in that decade.

The 30s were more profitable for the Canaries beating Brentford home and away in 1931/32 while the following season there was a win and a draw despite Brentford winning the Division Three South title.

Norwich took their crown the following season and, it seems hard to imagine now, but our first-ever fixture in Division Two (or in today’s terms the Championship) was away to the Bees, a game we lost 2-1. Brentford went on to win promotion to Division 1 that season (1934/35) marking the start of a golden period for them, which included a club-record fifth-place finish.

Both found themselves back in the second tier during the 1950s where Norwich suffered a humiliating 7-1 defeat in January 1958. It was by far Norwich’s heaviest loss that year and proved to be a freak result with Norwich winning the next six meetings and scoring four in four of those wins.

For many years our clubs operated at different ends of the football spectrum. While Norwich enjoyed many a year at the top table, Brentford were yo-yo-ing between the third and fourth tiers. During that baron period, there were a couple of cup games, the low light from Norwich’s perspective a 2-1 defeat in the 1996 FA Cup. An all too familiar third-round loss to a lower league opponent.

We finally meet again in the league on 18 August 2009. The 2-1 defeat a low point in Norwich’s recent history coming after the 7-1 mauling by Colchester. An awful start to life in the third tier, but a certain Paul Lambert was watching in the stands observing his new team. A week later he was in the dugout and the upwards journey began.

We played Brentford a month later in the Johnstone’s Paint Trophy, our debut in a much-maligned competition where City’s participation only highlighted how far the club had fallen.

Recent games have been in the Championship. 2014/15 produced a couple of memorable games. In the first game at Griffin Park, the away end was singing ‘we’ve got our club back’ in response to a scintillating 3-0 win. The gaffer that day, Neil Adams was soon out of a job, while his replacement, Alex Neil kick-started a faltering season. The Scot, however, suffered a rare defeat, losing 2-1 at home to Brentford (thanks to Alex Pritchard bossing the game).

Brentford made it to the playoffs that season only to be beaten by Middlesbrough in the semi-final, denying us a Norwich v Brentford Wembley showdown.

Our last trip to the fantastic old Griffin Park, famous for its pub on each corner, was a dull 1-1 in Daniel Farke’s free-scoring 2018/19 team.  However, a far far bigger game would take place at Brentford’s home a few months later. It was 22 April 2019 and an evening in London that would shape the Canaries’ destiny despite the boys in yellow being 160 miles north.

Brentford’s 2-0 win over our closest rivals Leeds United was huge. A killer blow for Leeds it left the door open for City after it had been slammed shut earlier in Stoke.

We owe The Bees a massive thank you and especially the game’s man-of-the-match, Brentford’s Sergi Canos – Norwich’s most popular reject.