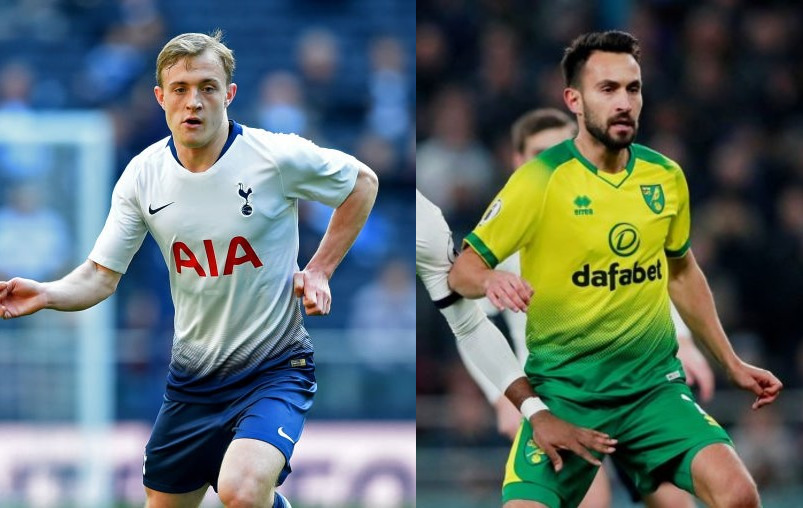 Oliver Skipp and Lukas Rupp have formed a formidable partnership in the centre of the park. Typically lining up alongside each other in the base of a 4-2-3-1, Daniel Farke utilises them in a double pivot.

Skipp, our loan signing from Tottenham, offers more protection for the back four, breaking up the play and seldom advancing forward.

Rupp is afforded licence to be more adventurous. While expected to be more progressive with his passing through the thirds and contribute to attacking phases of play, he’s also capable of being combative in midfield, which adds to City’s overall defensive solidity.

But what makes City’s ‘double-P’ so good?

Firstly, it’s important to differentiate this pairing to previous midfield duos under Farke.

We’ve seen various partnerships under the stewardship of the German: Harrison Reed and Mo Leitner, Tom Trybull and Mario Vrancic, and Kenny McLean and Alex Tettey to name a few.

But up until this point, there have been question marks surrounding all three pairings.

Reed and Leitner lacked positional awareness. Often drawn to the ball – for different reasons – they left spaces in midfield that the opposition could exploit. There is also the lack of physicality which proved to be problematic at times.

Trybull and Vrancic are the most technically gifted midfield pairing I’ve probably witnessed as a Norwich fan.

Dominating possession and crucial to chance creation, the German recruits were a major factor in City winning the league in such remarkable fashion, particularly praised for their individual performances away at Leeds in what was a crucial moment of the 2018-19 season.

But what they had in technical ability, they lacked in defensive solidity.

Neither is truly considered defensive-minded player, despite Farke’s attempts at moulding Trybull into a number 6. Trybull. in particular. was exposed extensively during the disastrous Premier League campaign.

The effects undoubtedly resulted in Farke adopting his most defensive midfield partnership to date: McLean and Tettey.

While the pair tightened things at the back, the lack of productivity was evident, severely hindering City’s ability to progress the ball through the thirds and recycle possession – the foundations of the Farkeball blueprint.

Simply put, the pairing of Skipp and Rupp is the most well-rounded yet.

Neither have obvious flaws (not ones that have been exposed yet, anyway). They are far more akin to all-round midfielders, as opposed to being categorised into boxes.

In build-up play, their positioning allows Norwich to progress the ball up the pitch.

Skipp typically drops in-between the two centre-halves when Tim Krul has possession, while Rupp drops into the position vacated by the advancing left-back when the ball is in play to offer a deeper option.

Skipp’s heatmap showcases just how defensively active he is, rarely venturing into the attacking third.

While Rupp’s heatmap demonstrates how deep he drops in the left half-space to receive possession, he also seldom enters the 18-yard box.

This not only allows City to be in a better defensive shape in transition, but creates more space for the attacking trio behind Teemu Pukki to be productive.

What is also noticeable is how little both swap sides. Rupp is assigned to protect the left side of the pitch, whilst Skipp the right.

In comparison to the 2018/19 season, the difference is noticeable. Below are four heatmaps from Trybull, McLean, Leitner and Vrancic during the title winning campaign.

Trybull and Leitner (the two heatmaps on the left) travelled from their pre-assigned positions to compete in different areas of the pitch, eluding to potential reasons why they have been omitted from this season’s squad.

So far this season, Skipp and Rupp have impressed immensely, averaging 2.1 interceptions, 3.9 tackles and 10.3 duels per game.

Norwich now have a base to build on which simply hasn’t been present in recent years.

A midfield pairing comfortable at protecting the back four and providing the front four, all while restricting the space available for the opposition to exploit.

The jury is still somewhat out on Norwich in regards to their ability to mount a serious promotion push, but what is for certain is their new double-P will be crucial to any hope of promotion this season.

How many goals have Preston scored this season in the league? #ncfc

Some #ncfc fans are an embarrassment, constantly calling Dean Smith out.
He’s working miracles with the squad he has!
We’re sitting in 2nd place.
Imagine when we lose a game - some fans would have a breakdown.