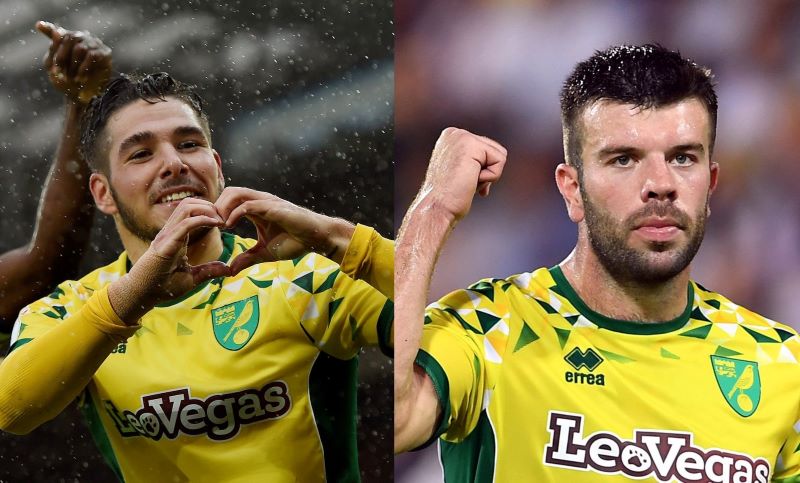 Beauty and the Beast. A story of love between a hideous monster and a beautiful and majestic royal. Currently showing in Norwich to empty houses, starring Grant Hanley and Emi Buendia.

This may seem rather a cruel piece of casting for my Disney remake but if we’re going to enjoy a slightly emotional and heart-warming conclusion to my masterpiece, which draws admiring glances from fans all over the country, then these are the guys needed to shine.

After a six-match unbeaten run that’s yielded 14 from an available 18 points, both our Scottish Prince-cum-Beast and the nimble-footed Argentine, who oozes regal dignity with every passing Championship minute, have moved centre stage.

They haven’t stood head-and-shoulders above other starring members of the cast such as Tim Krul, Lungi Sorensen, Mario Vrancic, Lukas Rupp or Teemu Pukki, but they are becoming increasingly prominent – and will undoubtedly be more so as the season progresses.

Using Twitter as a barometer (a dangerous and often wildly inaccurate measurement of opinion), it would appear that Grant is the personification of Marmite. He’s loved by as many people as those who think he’s a walking disaster. For every chest-thumping chant of ‘you’ll never beat the Hanley’ there is someone dismissing him as a mistake waiting to happen.

Lapses of concentration at Rotherham and Brentford have resulted in goals, but generally, since he returned to the fold, the centre of the pitch has become an area of strength for City. His partnership with Ben Gibson is developing into one that could be very profitable for the Canaries if allowed to flourish.

Both Gibson and Hanley are almost cut from the same cloth – big, imposing figures, vocal, and real leaders of men. Where there is a difference is in how they challenge for the ball. While both will not shirk a header or a physical confrontation, there is certainly more physical menace with Hanley. Former Burnley and Boro man Gibson has picked up yellows from some niggling, professional fouls that have stopped small breaks becoming full-blown attacks – while the Scot is more likely to go crashing through an opponent like a wrecking ball.

His acceleration across the turf is how I would imagine a rhino speeding down Gas Hill on a skateboard – slow at first, but then moving into an unnatural pace that just seems too quick for a creature of that size. The chances of stopping it are relatively thin, but due to its robust frame and thick skin, it will crash into something to slow its pace rather than avoid it.

Despite Hanley’s distinct lack of grace, his physicality and aggression at Championship level is very hard to match. After a winning, but rather inauspicious, return to the fold in South Yorkshire against Paul Warne’s Millers, he’s grown in stature and helped the team to pick up two clean sheets from the next five matches. Those matches include three wins and two draws, with only three goals conceded in the process.

Over the six-match unbeaten run we’ve scored nine times – including an absolute peach from Emi at Bristol City where he took control of Gibson’s pass, launched from just outside King’s Lynn, down in a couple of touches before deftly flicking past the keeper. Simply outstanding.

He has also contributed two assists in these games and has looked like a player edging towards full form. The only thing missing is consistency of performance, with his showing against Millwall not quite up to his usual standards.

However, he’s played every minute of this unbeaten streak and his influence in the offensive third cannot be replicated by many, if any, players at this level.

The wrangling over whether he wants to be at Carrow Road now seems very much behind him. He appears to have rediscovered his mojo and looks focused and passionate about being in the team.

Gone is the early season stench of going through the motions and the exaggerated gesticulations thrown wildly around to emphasise his frustration at being in the Championship. Instead we have a man who looks focused and willing to put in the effort over 90+ minutes to get a job done.

I love to see him working in tandem with Todd Cantwell – they bounce the ball off each other so well and create acute and incisive passing angles that enable them to cut through packed defences. The Dereham Deco just seems to have the respect of Emi in terms of his skill and touch.

While Cantwell has fallen off the first team cast list, Buendia has found others on his wavelength – the returning Marco Steipermann, resurgent Pukki, and scene-stealing cameos of Mario Vrancic have all helped to lift the Argentine’s game.

It’s thanks to the influence of Buendia and Hanley that City are in the early running and look set to be one of the big beasts in the division.

With the ugly stuff being taken care of by the Scot and the beautiful game being championed by Emi, Norwich are building a team that can more than match the muscle of any Championship side – while showing levels of skill and stamina that can just edge them past the most resolute opponents.

With the first quarter of the season almost complete, there’s every chance Beauty and the Beast can lead us towards a blockbusting end to a fairy-tale season.