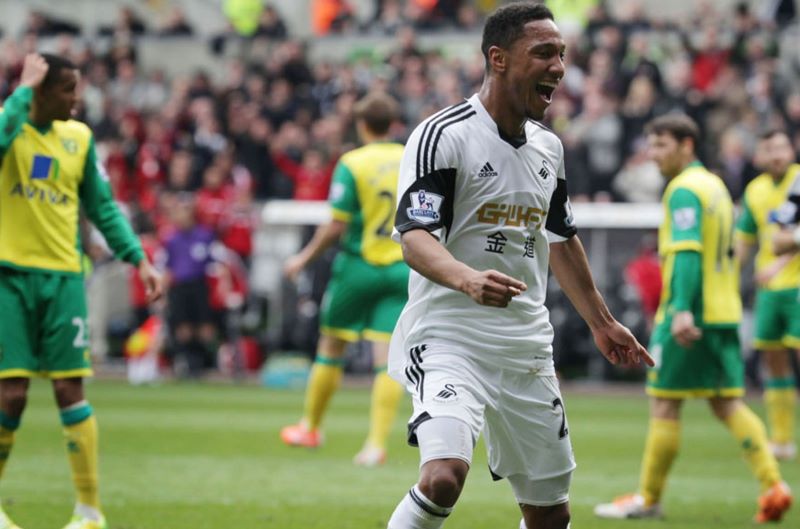 Next up, Swansea make the longest away trip of the season, all 310 miles to test the dedication of even the most ardent fan (not that that will be a factor this season).

Swansea’s first involvement in English football came in 1912/13 season when they finished third in the Southern League Second Division. They were one of four Welsh clubs making their Southern League debut, while another, Cardiff, finished champions.

Swansea enjoyed promotion in 1914/15 along with seven others as the league was revamped going into World War One. As such, we had one season together at non-league level before both playing in the newly formed Division Three South.

Our first game in the Football League came on 16 September 1920 and a heavy 5-2 defeat at the old Vetch Field.

Swansea Town, as they were known up to 1970, would play a big part in Norwich’s early history. On the 4 May 1935, Swansea were the final visitors to The Nest, Norwich’s unique but crumbling famous old ground. It had been Norwich’s home for 27 years witnessing some great FA Cup shocks as well as Second Division football in its final season. For the record, the game finished 2-2 before the gates were locked for the final time.

Swansea won on their first visit to Carrow Road the following season, though both clubs generally struggled in the second tier. Norwich were finally relegated in 1938/39, this despite us beating Swansea twice, 3-0 and 1-0.

Another Norwich relegation occurred at the end of the 1980/81 season.  One of the teams replacing them in the First Division was Swansea who would go on to finish sixth in their first-ever season at that level. Norwich were soon to join them with our first meeting at the top-table coming on 4 September 1982. That ended in a disappointing 4-0 beating, a rare highlight for The Swans as it was their biggest win in a season that ended in relegation. Norwich meanwhile enjoyed a decent return to Division One finishing 14th, beating Swansea twice in a January week 1-0 in the league and then 2-1 in the FA Cup.

Both teams enjoyed promotion to the Premier League at the end of the 2010/11 season. In my opinion, Swansea were the standout side that season as demonstrated when Norwich lost 3-0 at The Liberty Stadium, and later a convincing win in the play-off final versus Reading. For Norwich, that defeat was the only one in the last 16 games that season as Paul Lambert’s side secured the runners-up spot.

The first Premier League head-to-heads in 2011/12 finished with a Norwich double, winning 3-1 at home and 3-2 away. With Lambert gone, we went one better the next season, scoring four at the Liberty in a 4-3 win; a surprising score-line under the defensive-minded Chris Hughton and a win that maintained an excellent run of nine unbeaten in the Premier League.

Then, of course, there was another four-goal haul in South Wales in Farke’s promotion season. This time a one-sided 4-1 win on 24 November 2018; a result that reinforced the belief that this could be a special season for Norwich and it marked the third consecutive game that the free-scoring Canaries had struck four goals.

In this early-season top-of-the-table clash, we will be happy with just the one on Saturday as long as it brings home another three points.