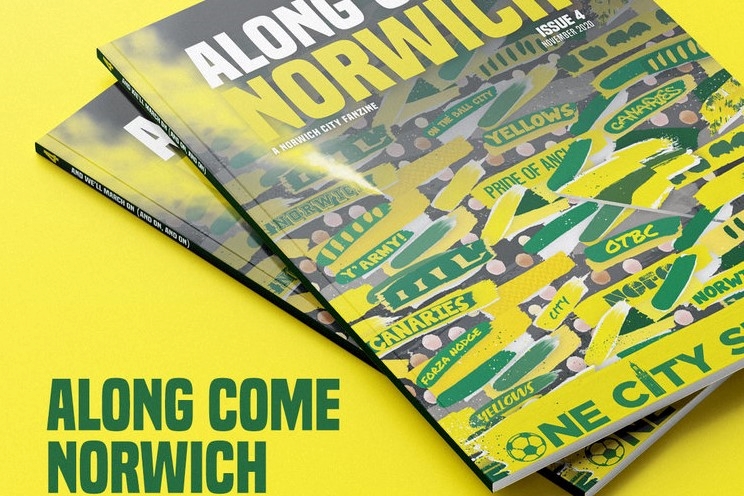 GG: Zine 4 is imminent I understand JP? Don’t you think the City faithful has been through enough? 🙂

I jest of course – when you describe these little beauties as some of the best stuff ACN has produced I tend to agree, although the flags, banners and crowd-surfers may disagree.

I don’t really want to blow any more smoke up your collective backsides, but you guys (collectively) have done such a brilliant job in changing the tone and feel of the place. What’s been your own personal highlight?

JP: Haha, cheers GG. To be honest I don’t see the flags and banners as so much of an Along Come Norwich ‘thing’, purely because we’ve worked in collaboration with the guys at Barclay End Norwich, and many people at the club. And Barclay End Norwich were the first to indicate they wanted to improve the atmosphere and put on displays – we just really liked what they were doing and wanted to help.

However, for all of it to work, it needs the fans to buy into it, and 99.9 percent of the time they’ve really done that. Sure, we’ve had the odd failed display or a few jibes about how flags don’t make any noise, but most people seem to really like it and more to the point, we’ve achieved what we’d set out to do, which was to bring more colour into the Carra.

From that perspective, I probably have a couple of personal highlights, the first being when the Pride of Anglia surfer was unfurled for the first time against those lot down the road, while it was also amazing to see the flags of the different nations as part of a full Barclay display for the home fixture against Blackburn on the night we sealed promotion.

Essentially, what I’m saying is I’d very much like there to be some kind of Groundhog Season where we could just replay 2018/19 FOREVER.

And so say all of us!

Any new names in zine #4 who’ve not appeared in the first three?

There’s plenty of the usual suspects, as you’d imagine, and a few new writers. Mr. Brigham, once of LYBP and Norwich City, has kindly written a great piece about missing those magic moments, while Edie Mullen has celebrated the rollercoaster that is supporting Norwich City.

We’ve also got a slightly off the wall piece from author Devon Rowcliffe about Jamie Cureton’s time in South Korea, and there’s a chance to win a copy of his latest book, ‘Who Ate All the Squid?’. Di Cunningham of Proud Canaries also tells the story of the Justin Fashanu banner in the River End and talks about how rainbows in Carrow Road is a wonderful thing.

What we set out to do with the fanzine is to bring together under one roof the very best people who write about Norwich City. This is also content that isn’t available elsewhere, it’s all original content which some brilliant people have worked really hard on.

On a personal level, how have you coped without Norwich City ‘in the flesh’ as it were, over the last nine months? Grim, right?

Ugh. It’s hard to put into words. I hate it, but I have come to enjoy it a bit more of late, for obvious reasons. However, with every last-minute Mario winner, majestic Hanley header, or Tim Krul wonder-save, you’re left feeling like you should have been there to witness it.

To feel the bond between player and fan, to just sing and cheer on your team until you’re hoarse. It’s horrible, but you have to cling to the fact that this is all temporary. We’ll be home soon, it’s just taking a little bit longer than we’d all like, and we can rest assured that unlike some, we’ll definitely have a club to return to.

You’re known for your positive take on most things Norwich City, Jon, but even you must have been properly pissed at that miserable attempt to survive in the Premier League?

It sounds like the club put so much stock on the first two or three games, that when they went monumentally wrong, we fizzled out like one of those shit balloons at a children’s birthday party, hopelessly flailing around until we hit the ground.

The thing is, I just don’t think it would have been as bad with fans in the stadium. We’d have made a fist of it, the instant accountability that a crowd brings to players would have dragged better performances out of them. We’d have still been relegated but without the abject displays of Project Restart.

Tend to agree with the notion it would have been less sh1t with fans in the ground.

But… it feels like we’re back… sort of. Are we going to do this?

Maybe, it’s still really early to tell isn’t it? It doesn’t feel like we’ve been playing at full pelt, yet we’re near the top of the league and probably the form side in the division. I think our next two games will tell us a lot.

If we can grind out results against Boro and Stoke, both of whom I think have a good chance of doing something this term, then we’ll be on the right track.

It’s just so important to be in and around the top of the league come January, as that might just convince the likes of Aarons and Buendia to give us another few months. If those two stay fit and are here in May, then we have a real chance.

Let’s just imagine for one minute that the Covid vaccine is as effective as we all hope it to be and, by some miracle, this lot manage to “inject hope into millions of arms” by the spring… what will Carrow Road look like for that first game back with the ol’ girl full to bursting? A flag or two?

Well, it will depend what the return to Carrow Road looks like. We’ve been told that no flags are allowed until the stadium returns to full capacity, which I understand and endorse. We couldn’t really be sanitising a few thousand flags each game.

We really want the first game where we’re able to create a display to be extra special, as it will mark a real moment in our history, where we’re all together again. So, something involving all four stands. That’s probably ambitious to the extreme, but you might as well set your sights high!

Yep, as someone once said… ‘Shoot for the moon. Even if you miss it you will land among the stars‘. Go for it JP.

I’m not sure if ACN takes special requests but in case you do… how the hell are we going to get On the Ball City song properly? Please can you add that to your to-do list? I know we tried and failed to get it sung a bit slower, but I’ll never ever give up on fighting for ‘Hurrah, we scored a goal’ to be sung as ‘Hurrah we scored a goal’ as opposed to that “haarahwessccdd” nonsense. That’ll never ever ever fail to irritate me. Ever. Ever. Ever.

The, should we say, younger generation just treat it as a single bl00dy word with no recognition (or probably knowledge) of what it should be. *Please* try Jon… if only for my health (I need to sit down).

Ha, I feel your pain. One to add to the long list I think, it’s a challenge I’m not sure we’ll ever overcome!

Finally, the plug. Where and how can folk get their hands on version 4?

It’s really doubtful with the current lockdown that we’ll be able to get any issues into retail spaces this time around, so we’ve dropped the price a little with that in mind, and it’s available here.

While people are there, any profit from purchases of the other merch, such as ACN badges, mugs and scarves goes straight into the flag funds, so if you want to help create an even more colourful Carra, you know what to do…