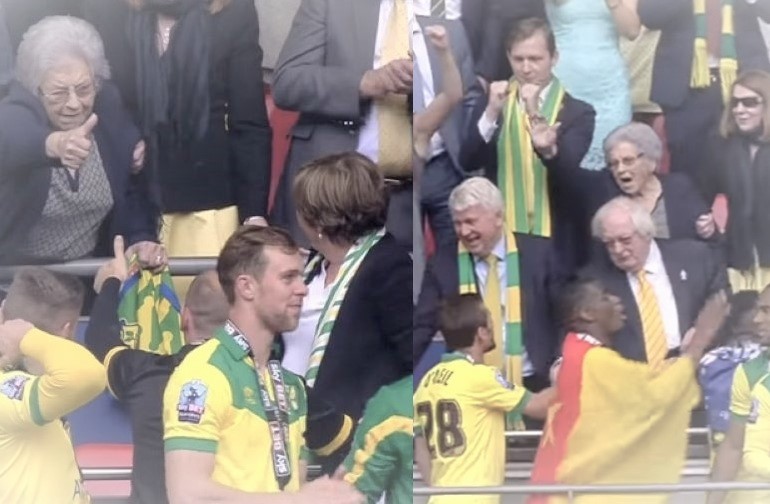 At the end of Norwich City’s play-off final triumph at Wembley in May 2015, there was one special moment  which stood out among so many indelible incidents.

Up in front of the Royal Box, as the dancing players took turns to hoist the trophy into the air, manager Alex Neil shuffled his way along behind them to reach the City contingent in that prestigious front row. As he arrived at Delia Smith, she drew his attention to an animated figure in the row behind her.

Delia’s mum, Etty, her face contorted with exultation, exchanged waves with Neil, then gave him a thumbs-up. She said one phrase to him twice: “We did it! We did it!”

Etty Smith, 95 by then, had not been sure she could cope with Wembley. Delia encouraged her to go and Tom Smith, Etty’s grandson, sat next to her as the unforgettable drama unfolded. Like many families, the Smiths wanted to be together on that special day and made sure they were.

Family. For many people, that is what football is about. And now the Norwich City family is mourning Etty’s passing, aged 100.

That thumbs-up for Alex Neil must have seemed like a reprieve from a Roman emperor because Etty was probably City’s worst loser.

She did not go to away games but listened to them on Radio Norfolk. If City lost, Delia dreaded the phone call she always made to her mum because there would be some very sharp criticisms. Home games were a different matter; Etty went to pretty much every one.

Her mood in defeat was just as black though, and successive managers were given her forthright appraisal of the team’s failings. Thank goodness nobody in her tight circle of relatives and friends introduced her to social media!

She had earned the right to say what she thought about things in any sphere of her life, though.

Etty Jones Lewis was born in rural mid-Wales. Her father, David, died of pneumonia when she was five. The family could not afford a doctor in that pre-NHS era. Etty believed that her father might well have lived with proper, but expensive treatment.

She carried the pain of the death and the injustice of the circumstances with her for the rest of her long life. It was the kernel of indignant hurt, deep in her soul, which made her a fervent Labour supporter.

Etty married at 20 to Harold Smith, who was serving as a RAF radio operator, stationed in Berkshire. It was war time, and it seems likely to me that Harold, a sergeant, was involved in tracking German bombers. After the war, now with toddler Delia, the Smith family set up home in Bexleyheath in Kent (just as it was becoming subsumed into the sprawling conurbation of London).

Delia inherited a passion for social justice from her mother, and there are other traits which I think can be attributed to the remarkable Etty: a quiet steeliness, a strident need to speak up for her beliefs and a refusal to accept lowered personal standards in her life or her work.

By all accounts, Delia first learned cooking by watching Etty, although it is utterly typical of Etty that when interviewed for a documentary about her globally famous daughter she chose an anecdote about failure – a rice pudding from which Delia had omitted the sugar.

For the last three decades of her life, Etty lived alone but near Delia and Michael Wynn Jones and, as we all know, took up her position in the front row of the directors’ box at Carrow Road for youth team games as well as for the senior team.

In her 80s she often wore a stylised biker-girl leather jacket. Somehow it looked exactly right for football, when teamed with her immaculately arranged coiffure and a City scarf.

She treasured the success of youth team graduates with special fondness but had her favourites among other players too: Gary Holt was one and Christophe Zimmermann the most recent. It cannot be coincidence that the former had that “three-lungs” work ethic and the latter an unadorned honesty about his graft and craft.

I cannot claim any special friendship with Etty, but like all who knew her, however tangentially, I have some lovely memories.

The second time I was in her company twenty-something years ago, I went over to say hello and she said: “I am sorry but I have no idea who you are.”

“There’s no reason why you should,” I said. “I’m Mick Dennis, a journalist.”

In 2004, as City closed in on the Football League title under Nigel Worthington, Delia treated the entire non-football staff to a day out: to the away game at Watford. Arrangements were made for Watford’s Pizza Express to close for the lunchtime session so that it could host a coach-load from the Fine City. My wife (Sarah) and I were invited and placed on a table with Etty.

As ever, she was delightfully indiscreet company. She happily confided a dozen completely confidential details about Delia, MWJ and their relationship with Norwich City.

Etty used to compliment me on columns I wrote for the Daily Mirror, but once I moved to the Daily Express, she wouldn’t allow that newspaper in her home and never again talked about anything I had written.

I can’t say I blame her.

Yet Sarah and I were thrilled and honoured to be guests at Etty’s 100th birthday party last January at Carrow Road. It was a celebration of two of her passions: Welshness and Norwich City youth players. All guests were forbidden from taking gifts but encouraged instead to make donations to the club’s academy.

Star turn of the entertainment was the London Welsh Male Voice Choir and definitely her most treasured guest was Gareth Thomas, the former Wales and British Lions rugby union star. He’d been Delia’s guest at a City game and had clearly won Etty’s affection.

Of course the Murphy twins – no longer Norwich players but both immovably established in Etty’s heart – were there too. And I imagine every guest will bring that joyous afternoon to the forefront of the memory amid the current sadness.

Etty had major operations well into what others would regard as great old age. The surgeons were sure her innate resilience would ensure success, but her refusal to see any reason to “take things easy” was a tad problematic. And of course, eventually, the years took their toll.

But, as things became difficult for her, she would brighten again on days which included going to watch Norwich play.

It is one of Covid-19’s cruellest tricks that it took that away from her and it is so difficult to believe that none of us will see Etty in her seat again.

What a lady. What a life.