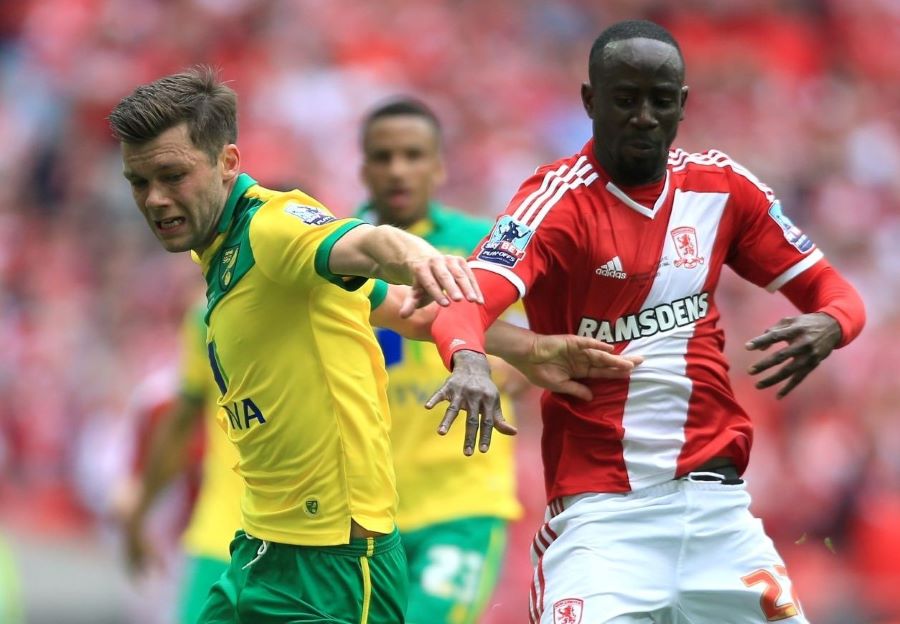 Tomorrow’s opponents need no introduction. We played them in one of the greatest games in our club’s long history. Think Middlesbrough and your mind will be cast back to a glorious day in the Wembley sunshine.

It was a day when Norwich played with confidence and style in front of a yellow wall numbering 40,000. A day when Norwich earned a place in the Premier League winning the self-proclaimed richest (biggest) game in domestic football – the 2015 Championship Play-Off final.

Six months earlier the promotion dream was rapidly disappearing. In contrast to Wembley, City put in a dismal performance on a cold November night on Teeside. The 4-0 loss Norwich’s heaviest of the 2014/15 season and marked the beginning of the end of the Neil Adams reign.

Boro doubled us that season, winning the return game at Carrow Road, thanks to a combination of an Alex Tettey own-goal and some pretty frustrating ‘game management’ from Boro. It was a rare defeat since Alex Neil took over and one that killed off any hopes of automatic promotion.

We didn’t have to wait long to gain our revenge though, Wembley coming just over a month later. On the day, Middlesbrough were worthy opponents, filling their end and providing a half of red contrasting in picture-perfect with the Canary yellow. Cameron Jerome’s early goal, notable as the first-ever scored at Wembley by a Norwich player (the Milk Cup win was thanks to an own goal) while Nathan Redmond’s second was a goal oozing quality, fitting of the Wembley stage.

The 2-0 victory certainly one of City’s finest.

Our history with Boro is not confined to the 2014/15 season though. The first meeting came in the 1960/61 Division 2 season and a 2-0 away defeat followed by a 4-1 home win in March. Interestingly, if they had existed back then, we would have faced each other in the play-offs with Norwich finishing fourth and Middlesbrough fifth. However, they didn’t and for both, another season in the second tier followed.

The next couple of seasons produced goals-fest. Norwich winning the next home game 5-4 then, in 1962/63, we generously shipped ten goals losing at home 4-3 and away 6-2.

Norwich v Middlesbrough has been a regular fixture in England’s top division. The first coming in 1975/76 with both sides winning the away game 1-0. This run of top-flight fixtures was ended with Norwich’s relegation at the end of 1980/81, a 6-1 loss in Middlesbrough our heaviest in the league that season.

That relegation sparked an odd quirk in the history of Norwich and Boro games. Over the next seven seasons that we were in the same league, in each of those seasons, one of the two were either relegated or promoted.

In 1985/86 both happened. Norwich won four points from the two games against Middlesbrough, contributing towards our total haul of 84. Enough to seal the Championship seven clear of second-place Charlton and a massive 39 ahead of relegated Middlesbrough.

It was a similar story in 1988/89 and the first Premier League season 1992/93. In both seasons Norwich finished in a record high position and poor Middlesbrough in the dreaded bottom three.

The away game of the 1992/93 was particularly memorable for City. It was the final day of an incredible opening Premier League season and a match filled with drama, Andy Johnson’s volley capping an exciting 3-3 draw. The point proved crucial in keeping City in third position and ultimately gave them a shot at Europe (thanks also to Arsenal’s two domestic cup wins).

That game also marked City’s final visit to Ayresome Park. By the time of their next trip to the North East, in March 1998, Middlesbrough were in their impressive new home The Riverside (the first ‘big’ club to relocate to a new stadium sparking a trend that many have since followed). This time it was Boro who were victorious and their turn for promotion.

The last Premier League meeting between the two was also another unforgettable occasion. This time a home game at Carrow Road on 22 January 2005. Norwich, 4-1 down after 80 minutes, went on to produce a comeback to rival any of those under Daniel Farke. The fourth and an unlikely equaliser coming late into injury time. The goal coming from an unexpected source – Adam Drury’s head!

Sadly as we know it was City’s turn to be relegated that year.