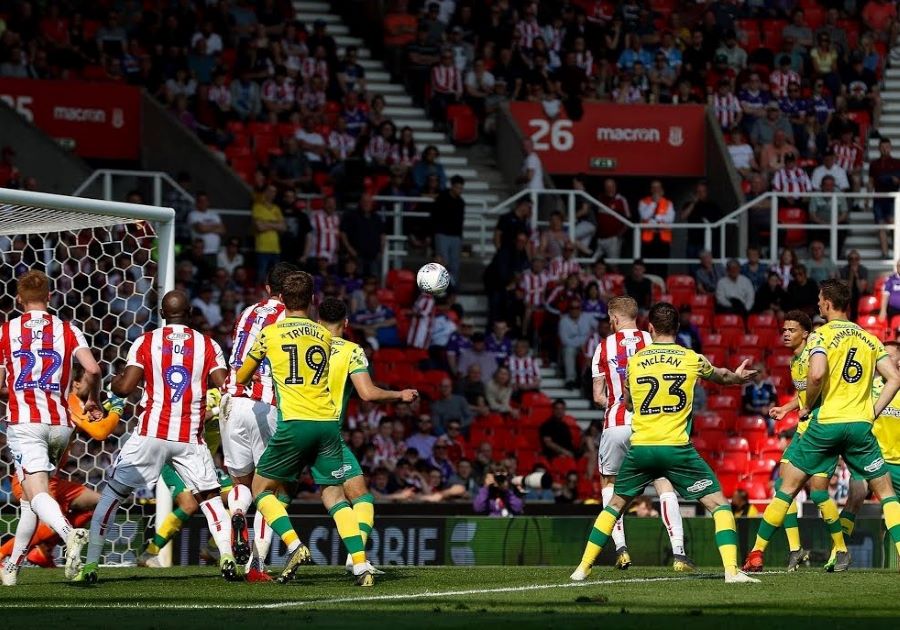 A visit to one of the Football Leagues founder members is always extra special for those fans who appreciate the rich heritage of English football. To others, no other place represents the clichéd ‘cold, wet, and windy away trip’, the very definition of a horrible away-day than a visit to the Britannia Stadium, Stoke-On-Trent.

Of course, on our last visit to Stoke, it was a lovely sunny late April afternoon. Not that those on the pitch, or in the away end, enjoyed it after another draw, City’s fourth in a row, looked to seriously de-rail a promotion campaign that was in the bag a few weeks prior. As we now know the lows swung to highs after Leeds capitulation later in the evening at Brentford.

Stoke may be one of England’s oldest clubs but with both sides falling on different sides of the third division’s regional borders (Stoke in the North and Norwich in the South) and having avoided each other in the Cups, then it was as late as 1960 before our first competitive meeting.

The first game was Norwich’s first away trip of the 1960/61 season, a 1-1 draw on our long-awaited return to Division 2. Stoke’s first visit to Norfolk was a big ask for their fans, a New Year’s Eve trip, and a 1-0 defeat.

The strangest result of those early meetings came on 9 March 1963. Norwich thumping Stoke 6-0. A massive win all the more remarkable as Stoke finished the season Champions and Norwich mid-table (although we did follow that result up with a 5-0 win against Newcastle in the FA Cup, a week later).

The first top-flight meeting came early in Norwich’s debut season at that level. On 30 August 1972 and a 2-0 home win maintained a promising start to life with the elite, with just one loss in the opening six. A 2-0 defeat at the old Victoria ground came on the last day of the season, but fortunately, it was irrelevant, Norwich having secured their First Division status the previous weekend.

The 1973/74 season ended in contrasting fortunes for both with Norwich relegated (despite a 4-0 home win v Stoke) while Stoke finished fifth, their highest-ever league position. Unusually for such a famous club, Stoke’s trophy cabinet is relatively bare, a 1971/72 League Cup their only major domestic honour.

1975/76 was all about mid-table security for both. The season’s games proving unusual with both sides winning the away game (Norwich 2-0 in the Potteries – Our first win up there and Stoke winning 1-0 at Carrow Road). If there is any fixture that demonstrates the significance of home advantage it is this one. Norwich has lost just four in 27 at home while Stoke has lost only five in 29 at their place.

One of those home defeats for Stoke came in the only FA Cup meeting and the last time Norwich have beaten somebody from a higher league; the second tier Canaries winning 1-0 at the home of First Division Stoke.

In 1984/85 both clubs were relegated with Stoke rock bottom on a paltry 17 points, 22 behind third-bottom Norwich. With that record, it is no surprise that Norwich bounced straight back while Stoke would face a 23-year wait before finally winning promotion to the Premier League at the end of the 2007/08 season, one in which they did the double over Norwich.

The only other double between the two coming in the 1996/97 season – this time Norwich won twice including a 2-1 win on our final visit to the Victoria Ground (Stoke moved into the Britannia at the end of the season after 119 – the longest consecutive run in English (and probably world) football.

There have been eight Premier League fixtures between the two. The first on 21 August 2011 was a highly anticipated affair as it represented Norwich’s first home game back in the Premier League after a gap of six years – the result a heartening 1-1 draw against one of the Premier League’s established clubs.

Stoke have struggled since their relegation in 2017/18, coincidentally under ex-Norwich gaffer Paul Lambert (although to be fair Lambert was only in charge for the final four months of the campaign), but at least their style of football has improved since the ‘up and at them’ approach of the successful Tony Pulis.

Effective but dull, as emphasised by the fact in ten of those Premier League encounters there was a total of ten goals – bang on a goal a game average. This season, so far, it’s a role reversal with the Potters free-scoring while The Canaries are the kings of the 1-0s.

Just a reminder to download the ‘We Meet Again’ Podcast that delves deeper into some of the games and topics discussed above and much more. It’s called Norwich City Football Club – Al & Val We Meet Again.