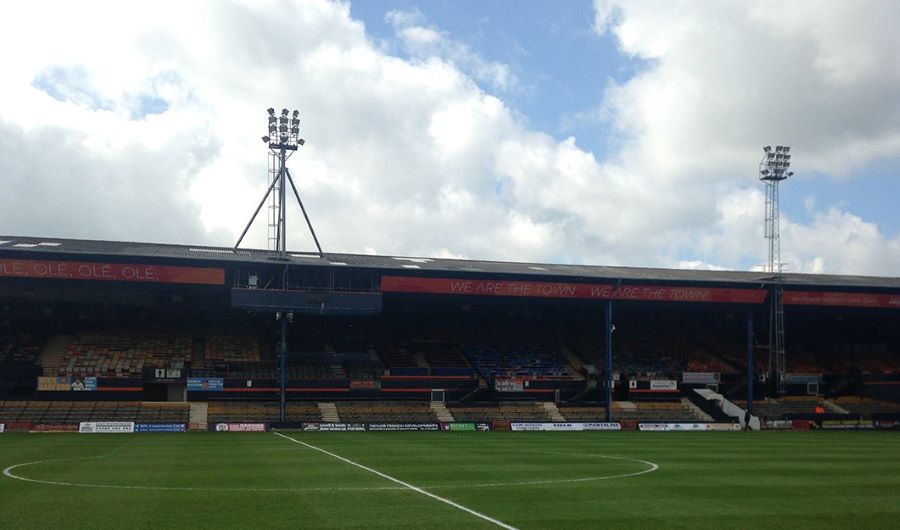 A rotten defeat on a rotten night in the half-light of a rotten little ground under the auspices of a rotten referee, and all played out amid a cacophony of 1000 screeching, yowling voices.

When did Luton turn into the Wild West?

But fair play to Bedfordshire’s finest. City can have no complaints.

We didn’t lose because referee Darren England got spooked and intimidated by 1000 supporters – even though he did – or because we have an injury list that would make even Jurgen Klopp squirm, but because Luton played well, with passion and fire, and we struggled to cope with it in key moments.

The Hatters’ big night was borne of a 4-0 walloping at the weekend, one that Nathan Jones described as the worst performance in his time as Luton manager, and we have to hope that City produce a similar response to a setback on Saturday.

I’m certainly hopeful the 2000 inside Carrow Road will do their very best to create an unlevel playing field akin to the one City encountered last night.

It was one of those where, almost from the word go, it had an uncomfortable feel; one where City had never had a proper handle on the game or the events surrounding it – part of it down to the team that Daniel Farke was forced to field and in part because some of the simple things weren’t executed very well.

Michael McGovern’s role, not unsurprisingly, was part of the social media debrief but I’m not about to throw the Ulsterman under the bus. His biggest crime appears to be not being Tim Krul and not being as good as Tim Krul, and there’s not a lot we can do about that.

Daniel Barden did okay in the Carabao Cup defeat at the O.K. Corral but Farke has taken the decision that an experienced rather than inexperienced voice is needed to help guide us through this mini-crisis, and I see the logic in that.

McGovern, unfortunately, is lacking in confidence, probably due to his lack of game time, and that in turn has had an impact on those in front of him. He’s yet to make and *big* saves, the type that win games and which fill you full of belief. Goals numbers one and two last night were both ripe for big saves that didn’t happen.

But maybe the most troubling aspect since Krul’s injury at Stoke is that we’ve forgotten how to defend set-pieces and crosses – something that has to be addressed pretty sharpish.

The overall passing has also become a little laboured and directionless minus the focal point of Teemu Pukki, and while Marco Stiepermann and Przemysław Płacheta are both energetic and willing, neither are able to offer anywhere near the same level of threat.

Without that clever movement, we end up passing the ball for the sake of passing it; something that will hopefully not be an issue this Saturday with a fit and refreshed Finn leading the line.

But we still have to defend better, and even with a more fluid attacking thrust, we still need to rediscover that invaluable ability of digging out clean sheets.

That obviously relies on referees not falling foul of 1000 screaming voices and giving penalties for incidents that begin with centre-forwards giving centre-backs a blatant shove. We’ve been on the end of some good fortune and favourable decisions of late though – this was payback time.

Grant Hanley can count himself very unlucky but, as it transpired, City weren’t good enough to get a second goal anyway. Sowe came out on the wrong end of a few decisions… that’s life.

The injury bulletin on Tuesday offered hope but it will still take time before the squad takes on the look of one equipped for a serious promotion push. Right now we’re just treading water, awaiting the return of the cavalry.

The square pegs in round holes tend to work for a few games but at the elite level are unsustainable. Jacob Sorensen has done a fine job at filling in at left-back but he’s been sussed. Opposition managers are targeting him to good effect.

The decision to send Sam McCallum to Coventry seemed a little odd at the time. Right now it’s taking a chunk out of our backside.

Yet, miraculously, despite everything, we remain top of the league, albeit just four points ahead of tenth-placed Middlesbrough.

We’re constantly reminded the Championship is a marathon not a sprint, so to extend that metaphor…

We edged ahead before being hauled back by the pack at the eight-mile mark. We hit an early “wall”, missed a drinks station, suffered a stitch, and took a stray elbow that knocked us off our stride.

But, there’s another drinks station a couple of miles down the road, the stitch is starting to wear off and, for now, we just need to keep in touch with the pack.

Once the fluids are replenished, we reset and go again.