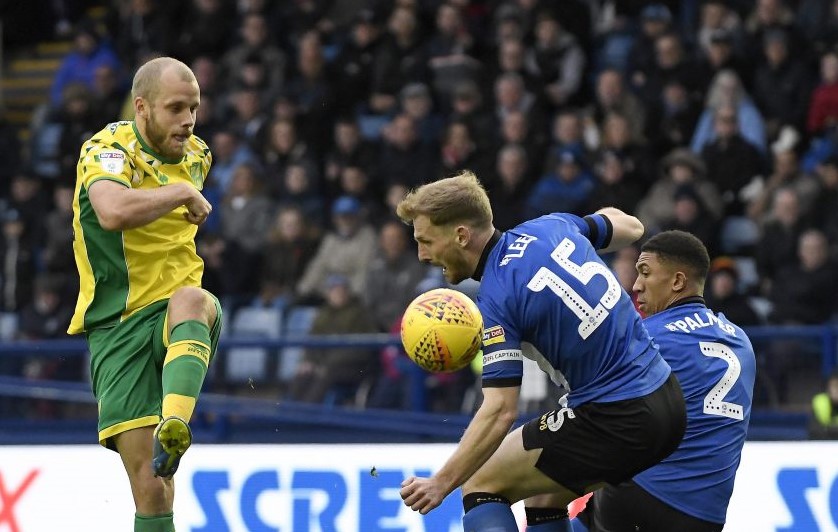 Next up for City is Sheffield Wednesday, one of the Championship’s few ‘sleeping giants’. They have not been in the top-flight in 20 years now but still, they are an attractive opponent on the fixture list with an illustrious history, sizable fan-base and a grand old stadium, in Hillsborough.

That history that I referred to includes four league titles and three FA Cups, though these were all won by 1935. It was as cup holders ‘The Wednesday’ as they were known back then arrived in Norfolk for what should have been a routine victory in the first round of the 1908 tournament. It was the first meeting between Norwich and Wednesday and no-one would have predicted the 2-0 win for The Canaries.

Considering that, in addition to the FA Cup, Wednesday were league Champions as recently as 1903/04 and they would finish the 1907/08 season fifth in Division 1 versus Norwich’s 15th in the Southern League, it has to go down as one of Norwich’s greatest cup results and the first of many giant-killings that have illuminated our history.

Both gates prompted Norwich’s owners to move to a more suitable stadium and in 1967 Sheffield Wednesday completed a unique treble when they beat Norwich 3-1 in the FA Cup’s third round, becoming one of a few sides to have played Norwich at all three of our homes (Newmarket Road, The Nest and Carrow Road).  The 1967 game was also notable as City’s first-ever appearance on Match of the Day.

It was 30 years after that first cup meeting when we finally met as equals in the league. We won that first game in Division 2, 3-1, but the following season we suffered a 7-0 thrashing at Hillsborough. It would be the first of many high-scoring games on that famous pitch. To this date, it is still an equal record defeat in the Football League.

It was a much tighter affair on 8 April 1972 as Norwich secured a crucial 1-0 home win in the run-in to a first-ever second tier title and, more importantly, a place in the top division for the first time in the club’s history.

Bizarrely, history repeated itself on 8 April 1975 as Norwich won 1-0 away, in yet another important win in a promotion-winning campaign. As City went up, Wednesday finished rock bottom suffering relegation to the Third Division in the first time in the club’s history.

That result was also City’s first win at Hillsborough but the league game on 15 May 1982 was certainly the most memorable. After a remarkable run during the second half of the season, Norwich arrived in Sheffield on the final day of the season knowing that if they won or Leicester failed to win then they would make an immediate return to the First Division.

It was a tense, dramatic occasion played out in front of a massed Yellow Army (10,000 and upwards). There were late goals, including Wednesday’s winner that was scored while a home fan was on the pitch and in the six-yard box. Norwich lost but Leicester dropped points – and we celebrated promotion on the Hillsborough pitch.

It could easily have been the home side celebrating for 1981/82 was the first season where three points were awarded for a win – this got Norwich over the line whereas the previous two-points-per-win ruling would have seen Wednesday finish above us.

In 1989 we found ourselves unusually playing Sheffield Wednesday in consecutive league games – the last game of the 1988/89 season and the opening game of 1989/90. The latter of those saw Norwich fans became the first to occupy the Leppings Lane end since the Hillsborough tragedy the previous April.

We would also be back at Hillsborough for the FA Cup semi-final in 1992.

City suffered a rare defeat in the opening Premier League season 1992/93, losing 1-0 at Hillsborough. The scorer for Wednesday… full-back, Nigel Worthington. In the Norwich side that day, was ex-Wednesday stalwart, Gary Megson. Other notable player connections include Barry Butler, Chris Woods and Jon Newsome.

There have also been a few final day, demoralising defeats in recent years. In April 2009 Darren Huckerby and Dion Dublin’s final Canary appearances were soured by a 4-1 loss. Meanwhile James Maddison’s last appearance in the yellow and green ended in injury and a 5-1 defeat (Jordan Rhodes scoring twice for the Owls).

But to end on a bright note, there have also been a couple of convincing City away wins.

Gary Holt’s piledriver was the pick of the bunch in a 5-0 win in 2001/02. and then of course, in 2018/19 there was the 4-0 win – a result that underlined the potential of Daniel Farke’s squad in that Championship winning season and probably the result that alerted the rest of the league that something special was happening in Norfolk.

Finally, of course, we have to mention the last meeting – a dramatic 2-2 at Carrow Road which had everything from a breath-taking finish, to disputed hand-balls and then a last-minute free-kick that put City on the brink of promotion.