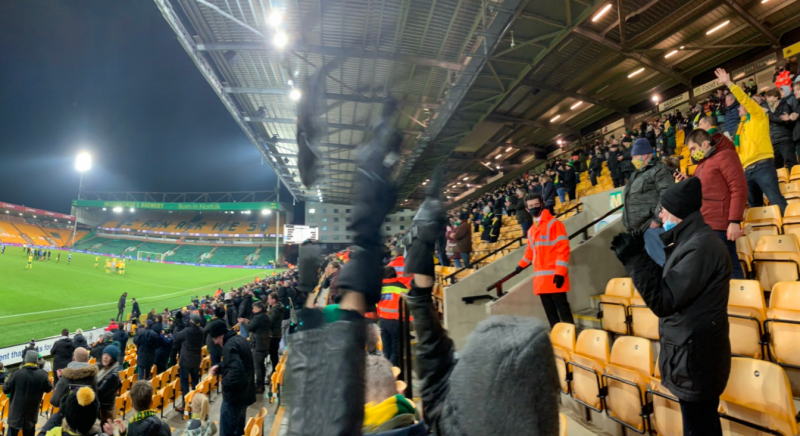 On Wednesday I went to a football game for the first time in nine months.

As I approached the Carrow Road gates I felt a strange mix of nerves and excitement, as if I was going to watch my team in person for the very first time.

Living outside Norwich I have little reason to come across the stadium other than on match days, and even the site of the South Stand towering over the Riverside Retail Park was enough to bring a solitary tear to the eye.

I was greeted with a truly comprehensive one-way system that started by the club shop and spanned the perimeter of the car park, leaving no room for anyone to cut corners and skip the queue where we waited for temperature checks and the presentation of photo ID to match tickets.

Upon the completion of these checks, it was then to a strangely deserted area just outside the gates to the South Stand, where I was denied my usual trip to ‘Norfolk’s Finest’ for a compulsory hot dog (a foot-long one from a vendor in the Morrisons car park had already sufficed and cost just £2.50… would recommend).

As people filed into the concourse it was clear that the correct efforts had been made, as socially distancing was entirely possible and it felt far more spacious than usual. The watery hot chocolate was just as tasteless and diluted as I remembered but I couldn’t care less – we had a striker fit to start, a host of stars had returned to the bench and I was just 45 minutes away from watching a match at Carrow Road.

The claims I had heard that rows had been alternately selected for seating were confirmed true, despite one small blip that our very own Mick Dennis encountered as he attempted to enter the ground.

“One issue yesterday was that we were supposed to be in the Community lower, but found people sitting directly behind us and directly in front.

“In two swathes of seats, at the periphery of those sold in the Community lower, they had not left alternate rows. It didn’t feel safe.”

What happened next was a showing of a willingness to adapt among the various staff at Carrow Road on the night, and a victory for common sense, as Mick outlines:

“I then saw a steward I know, up in the seats, in conversation with someone who was obviously talking about the same issue. The steward told me he’d contacted the ticket office, and someone was coming. Some fans were [then] allowed, in a socially distanced queue, to go into the River End.

“What I take from is that a ticketing mistake had been made but that our club dealt with it pragmatically and safely. I think the whole process has been handled well.”

The upshot of Mick’s ticketing issues were that he ended up two rows in front of me and my family in the South Stand. I must say that, although Mick and me had never actually met, it was comforting to see a face I recognised from the Norwich fandom and MFW community dancing unreservedly along to the familiar goal music we all love (or hate) as Jacob Sorensen found the net for the first time in canary yellow.

I’m sure we’re all aware of what happened in the match, and that you’ve enjoyed the various reports and reflections around it available on the site, and that, whether being there through iFollow or sat in the Carrow Road seats, your celebrations at Emi’s deflected winner were as passionate as mine.

What I took from the evening was that progress is being made, and that safe football viewing for all is getting closer. The separation of fans when leaving the ground could be improved, but Wednesday felt like an otherwise perfectly run, Covid-free environment.

The tickets for the upcoming Cardiff City home game sold out considerably quicker than either of the first two, suggesting that the fan base is growing more comfortable with the idea of going to matches, and the positivity on the pitch seems to be finding its way off it.

While many forecast this as the dullest season of all time for fans, the spring in my step as I left Carrow Road suggests to me that this could be the happiest promotion we’ve ever had (and that’s saying a lot).

Whenever fans feel comfortable to be back at the football, be that in weeks, months, after a vaccine, years after one arrives or right now, I can promise an excellent experience for them when they do, even if it feels slightly different.

In the meantime, we’ll hope the players can keep producing on the pitch, and, Mick… keep dancing!