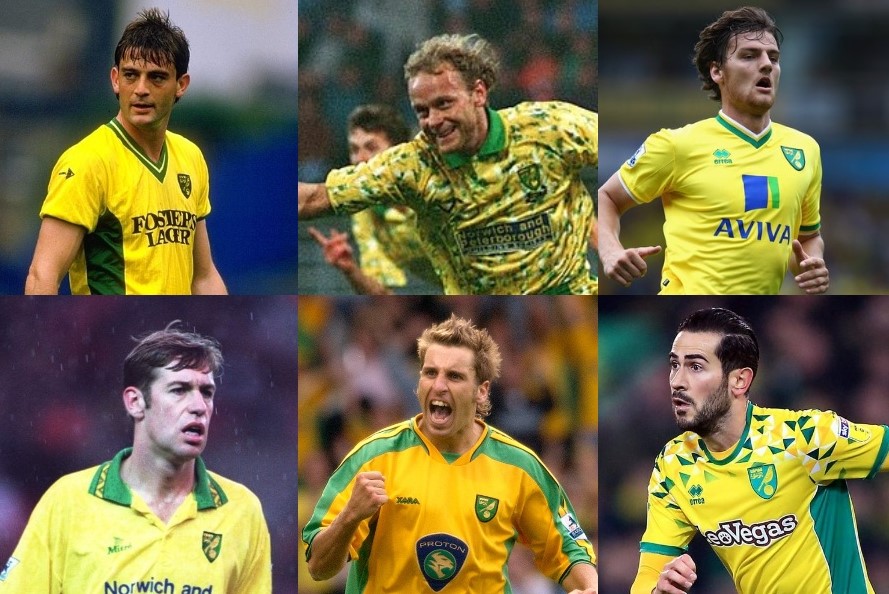 It’s hard to recall a time, or specifically a year, when the role of Norwich City Football Club in our lives has been quite so pronounced.

The three-month hiatus as Covid did its worst was a reminder to us all of its place in our hearts and minds and even the grimmest of relegations was, in the grand scheme of things, but a blip on each of our lifelong journies.

If that sounds a tad melodramatic and philosophical, then I have to plead guilty. Covid has forced us all to consider our own mortality but, more importantly, the mortality of those we love.

Reminiscing has become part of the daily staple and so, partly as a result, my Christmas offering to you is my ‘top ten Norwich City highlights’. (I opted for highlights – as clumsy and vague as it is – as what follows is merely a collection of games, goals and memories).

I’ll have missed some, some may appear trivial, but each one has, for different reasons, stayed with me forever.

So, in chronological order…

A long time ago and I was only little, but this was the first time I experienced a rocking Carrow Road. We were standing in the roofless River End, my mum was also there (a rare appearance), and City needed a win to survive their first-ever season in the top flight.

I can’t recall the details, but I can remember the noise, the buzz and the unbridled joy triggered by a Dave Stringer diving header that signalled another season in the top flight.

What a day. The final day of the 1981-82 season and City needed to at least draw with Sheffield Wednesday to clinch another promotion back to Division One. 9000 of us were reported to have travelled north and it was the first time I’d experienced being part of a Yellow Army that had been mobilised en masse.

The day itself is worthy of a column all of its own (I’ll spare you though…), suffice to say it was a nerve-jangler of the type in which Norwich City specialise. Keith Bertschin equalised late on for City in front of the travelling masses and delirium ensued, only for Wednesday to score an injury-time winner.

Luckily, Leicester – our rivals for the promotion spot – were unable to win and City, despite losing, still gave the 9000 reason to celebrate. In addition to the noise and colour of the afternoon enduring, so too did the journey home with yellow and green in evidence for what felt like the entire stretch from South Yorkshire to Norfolk.

One for the Ipswich fans. Yes, it is only the second major trophy we’ve won and it is neither the FA Cup or the UEFA Cup, but it’s the best we can muster in our roll of honour.

And it was a bloody brilliant day, even if the game itself was a shocker.

In an irritating twist, that’s annoyed me to this day, there were more Sunderland than Norwich supporters in Wembley that afternoon, with a whole block of them in the City end!

But, it mattered not. Thanks to Gordon Chisholm and Asa Hartford.

Any win over the sparkling witsters from the red half of Merseyside should be celebrated, especially when you’re Norwich City, and this one was particularly memorable. Those adorable Scousers were closing on yet another title, or so they thought, but had hit something of a blip as they rolled into the Fine City.

From the vantage point of the Barclay in the ‘pen’ behind the goal, where I was able to sample that famous Scouse wit in my left ear first-hand, I watched the Reds take a first-half lead only for them to be pegged back, with Kevin Drinkell eventually notching an 88th-minute for City.

Oh they were angry… and sad. Even more so when Everton went on to pip them for the title. Happy days.

The evening when we believed anything was possible.

With Villa, Manchester United and ourselves locked in a three-way battle for the title, the second city’s finest rocked up with the hope of urinating on our title-winning dreams.

In the end, United did that a few weeks later, but on the night, after Villa’s Garry Parker had missed the sitter to end all sitters, John Polston’s close-range tap-in made the ol’ girl rock like never before and sent us all into dreamland.

We departed Carrow Road with hope in our hearts and our heads in the clouds.

Yep, I was there but, alas, an afternoon spent drinking strong German pilsner in a particularly hospitable bierkeller has rendered my memories of the club’s finest hour less crystal clear than I’d like.

I can however still recall that split-second of disbelief and the satellite delay between Gossy’s volley hitting the back of Raimond Aumann’s net and the realisation we had actually taken the lead against a bona fide European giant.

Both goals were scored at the opposite end of the Olympic Stadium from where we were housed and that mixture of disbelief and beer goggles, made for a heady is-this-really-happening couple of hours.

But it did. And was brilliant.

No City top ten would be complete without a mention of our greatest ever, even if this highlight, at the time, looked like being his Canary swansong.

The home game with Cardiff on 13 December 2003 was supposed to have been Darren Huckerby’s final game of a three-month loan from Manchester City, and his agent had made it quite clear that little Norwich City should forget any notions of signing his client on a permanent basis.

Luckily Hucks had others ideas (even if we didn’t know it that afternoon) as he single-handedly ripped Cardiff apart with with what remains the best individual performance I’ve ever seen in a City shirt.

While the Beccles bovver boy may not hold quite the same place in people’s hearts as Hucks, he didn’t half lift the roof off Carrow Road when he netted an 89th minute winner in City’s top-of-League-One clash with the Fallen Giants of the North.

It was arguably the first real WOW moment of Lambert era, the impact of which (whether we like it it or not) we still benefit from today. Stephen Hughes (remember him?) was the provider with a whipped-in cross that the BBB guided home with a deft glancing header.

As the kids put it… scenes. It also provided one of the best NCFC images of the 21st century.

The spring of 2015 provided City fans with one of the most glorious spells in the club’s history – in particular, the 16 days between the 9th and 25th of May.

Having qualified comfortably for the playoffs, we were paired with our nearest and dearest. Being the kind, thoughtful souls we are, we presented them with the third-best moment in their history when Paul Anderson equalised Jonny Howson’s opener in the first-leg in front of a very chirpy Portman Road.

The second-leg had a couple of wobbly moment but ended up going down in City folklore. In summary… Wes… Cam… pitch invasion… green flares… horse sh!t…

Nine days later, still abuzz, we reconvened at that Wembley. That went well too. The rest, as they say, is history!

You won’t need reminding, but anyway…

Stiepi, when he was really good, got us off to a flyer that night with one of those famous left-foot zingers and the promotion party was already underway when Super Mario made it 2-0 with one of his own howitzers.

The party continued, tempered only slightly by Blackburn pulling a goal back, and the sights and sounds at the final whistle were of an ilk never to be forgotten.

It was the first time most of us had seen City get promoted at Carrow Road and my only regret of that magical night was that my dad was too poorly to be there and celebrate alongside me and his second family.

But, it was wonderful and is precisely why we do it.

So… those are mine. How about yours?

If you fancy letting us know your City highlights, most notable moments or memories, then please feel free, either in the comments below or emailed to gary@myfootballwriter.com. A guest blog awaits anyone who fancies it.

But more importantly, stay safe, look after your loved ones and try your best to have a nice Christmas.

Thanks for reading MyFootballWriter. Without you we’re nothing.