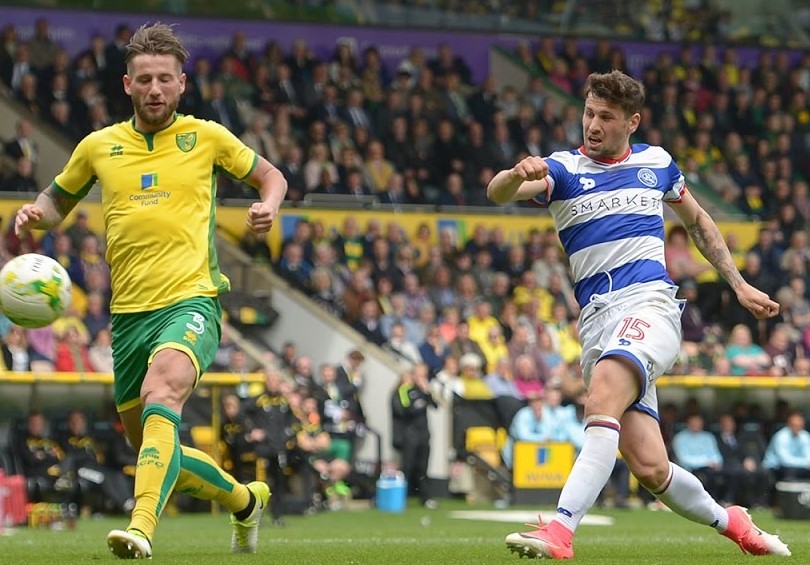 With 125 matches to date, not including meetings in the old Southern League, QPR is (I believe) our most played opponent. City has faced the blue and white hoops more than any other and, after a break for one season, this Tuesday we do battle yet again.

QPR turned professional entering the Southern League at the turn of the century and were champions twice, 1907/08 and 1911/12. During that period, they also appeared in the first-ever Charity Shield and defeated Norwich in the FA Cup.

In 1921 both Norwich and QPR were elevated to the Football League (Division Three South) both league games finishing 2-0 to the home side. Honours even was largely the trend over the next twelve seasons with Norwich losing just once at home but winning only twice away. One of which, and the first at Loftus Road, a 2-1 win on Christmas Day swiftly followed by a 5-0 home win on Boxing Day.

Norwich’s promotion in 1933/34 (despite losing away to QPR 5-2 that season) meant for the first time since turning professional (World War I aside) that QPR was not on the Canary fixture list at the start of the 1934/35 season.

17 April 1976 was a particularly memorable game during this period. Flamboyant QPR was on course for a historic first-ever title. They were closing in on the championship after a fantastic run of twelve unbeaten (including eleven wins). Crucially they lost 3-2 in the Easter Monday sunshine at Carrow Road. It was a shocking reversal that proved critical with QPR losing out to Liverpool by a single point.

Another noticeable match during that era was on 10 October 1981. Norwich’s first game on the notorious Loftus Road plastic pitch. Norwich lost 2-0. They were not alone as many struggled on the artificial surface, QPR meanwhile rode high in Division One thriving on the home advantage gained from the alien playing surface.

Norwich never won on the plastic, despite the mid/late 80s representing a golden period for the club (the next away win, 3-1 in October 1990 was achieved on grass).

1988/89 was a fantastic year for City. By March we were closing in on a historic league and cup double. For the final push, Norwich spent big money on QPR striker Dean Coney. Coney proved not to be the final piece of the jigsaw, in fact as City’s season imploded, Coney became an expensive scapegoat where a goal drought followed by serious injury brought a premature end to his life at Norwich.

Coney aside, there have been a couple of shrewd purchases from West London. They played in completely different positions and eras but both went from relative uneventful spells at QPR to become Canary legends and Hall of Famers: 1920s goal-machine Percy Vargo and 1980s England goalkeeper, Chris Woods.

Since 1996 the bulk of our meetings with QPR have come back in the second tier. There was another important home win. April again, this time 3-0. No titles were at stake but a win that was essential in keeping City up, securing survival with one game to go.

2010/11 was a vintage season for both. The season finished QPR top and Norwich runners-up (the first time both achieved promotion in the same season). Despite the positions, Norwich came out on top in the head-to-head with an away 0-0 followed by a fine 1-0 home win on New Year’s Day.

Both were soon back in the Championship but by 2018/19 on very different pathways. The 4-0 home win on 6 April 2019, for me one of the finest first halves that I’d witnessed live. Norwich were as good as QPR were bad that afternoon.

Football goes in circles and despite the gap that day we are back together as equals as Tuesday sees the return of one of football’s longest rivalries.