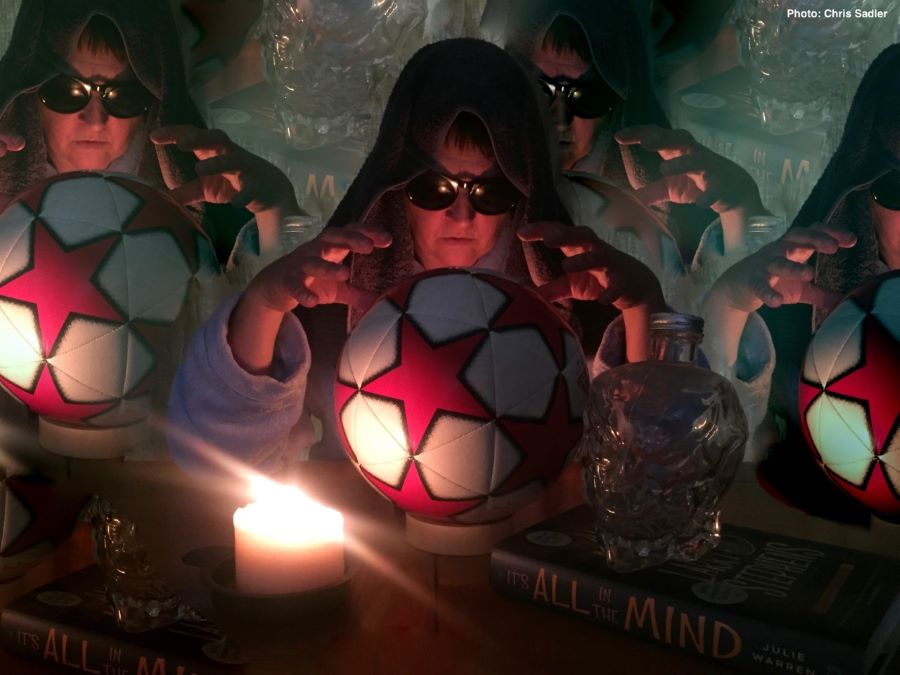 I caught renowned village seer and grizzled oddball Nostrafarmus leaning over his garden wall as I walked past this week. He was waving his hands about in a mysterious fashion.

‘Shhh!’ he said, gimlet-eyed, weaving his fingers through the air, ‘I’m trying to put a spell on Delia.’

‘Her,’ he said, pointing at an angry-looking chicken stood by the wall. ‘She’s recently been a bit… er… pecky,’ he explained. ‘Anyway,’ he grimaced, ‘whatyerwant?’

‘You still in the prediction business, Nosty?’, I said.

‘Yeah, but I’ve had to put a stop to the scrying,’ he said, shaking his head, ‘it was playing hell with my lumbago. But I’m still doing the tea leaves. I do ‘em when they’re still in the bags. Makes it more of a challenge’. He paused his spell-casting to yank a sizeable handful of greenery from a nearby climbing weed, held it up to the light for a moment, peered at me with a curious expression, then blew his nose on it. ‘Sorry,’ he said, ‘thought I was gonna sneeze.’

He did sneeze. A gargantuan, chicken-ruffling, whopper of a sneeze. ‘Told you,’ he said, wiping his sleeve across his face.

I carried on, ‘I was just wondering if you’ve foreseen City’s future; you know, for 2021?’

A disgruntled Delia eyed me accusingly from below. With a vigorous moist shake she attempted to ruffle her feathers back into shape; clucked an irritated cluck, then stalked off.

‘I have as a matter of fact,’ Nostrafarmus said, watching the chicken waddle away. ‘Last night’s pot of Green China Jasmine told me everything.’

‘Pfft, plenty,’ he said, ‘Pyramid bags. Wrote it down, if you’re interested…?’

He delved deep inside his holey green jumper and felt around the inner lining of his stained string vest. Eventually he pulled out a crumpled yellowing piece of paper. ‘Here you go,’ he said in a hoarse whisper, handing over the note, his nose sporting an impressive dewdrop.

I accepted the note with a polite smile, trying not to wonder where my hand-sanitiser was. ‘That’s very kind of you,’ I said. ‘Is it OK to share this with the good folk at MFW?’ I asked.

’S’pose,’ he shrugged, ‘just pop us a fourpack in the porch sometime,’ he said, waving vaguely towards a ramshackle lean-to gently creaking in the breeze. ‘Anyway, I’m off,’ he continued, ‘gotta hypnotise Daisy. That’s the cow, not the missus. Been giving purple milk. Very odd.’

‘Thanks, Nosty,’ I said, and watched him slowly shuffle away muttering something about Runes, Ruel, and the River End.

I grasped the grubby note – obviously torn from an old Yellow Pages – my knuckles white with anticipation. Eagerly I scanned the words attempting to unpick the meaning from his spidery handwriting and curiously curdled prose.

My eyes widened. ’Phew!’ I immediately rushed home to type it up. ‘MFW needs to know about this, Gary needs to spread the word…’

But what did Nostrafarmus write? What exactly did that crusty old mystic see? What did he predict for Norwich City in 2021?

This is what the scrap of paper said…

‘Two players thus named shall leave the Road. They will be Spurred by an agent provocateur. They will visit a distant City, and will be partially content to be United once more.

‘I see a kitchen with many bubbling pots. The chef stirs with enthusiasm and the food is delicious to taste. However, one pan bubbles, boils, and overspills. The clean-up takes time but the diners are replete. All is good. Bueno.

‘A horseless charabanc with impressively elaborate coachwork remains parked outside the kitchen. The driver and engineer stand back, admiring their work. Although it’s a beautiful vehicle they wish to upgrade.

‘They look up to a window above the kitchen. Inside is a room with a long table surrounded by 24 chairs. They know there are four too many.

‘Inside many gold coins jangle in a purse. They belong elsewhere. They jostle and dance and drop clinking into a large wooden chest.

‘On a nearby shelf is a silver chalice, it glows brightly for a while, then fades. It will be seen again.

‘On the wall is another table, this time standing up on its side. It lists names and numbers. Look high to see what you want to see. There is a gap. Double figures. Is it enough? It feels so.

‘Summer revels in confidence, the wind in her sails allow the ship’s crew to dance freely. Many youngsters join in. Their time will come. A ball rolls.

‘The alphabet returns. I see a ‘B’ as a constant travelling companion.

‘The chef and engineer smile. They look back over their shoulder – and forward to the future – and consider a job well done. The scribe counts his columns but values the kindness and commitment of the community more.

Curious, eh? Gosh bless ‘im. But, as you know, Nostrafarmus is never wrong…

(Disclaimer: No chickens were harmed in the writing of this article.)