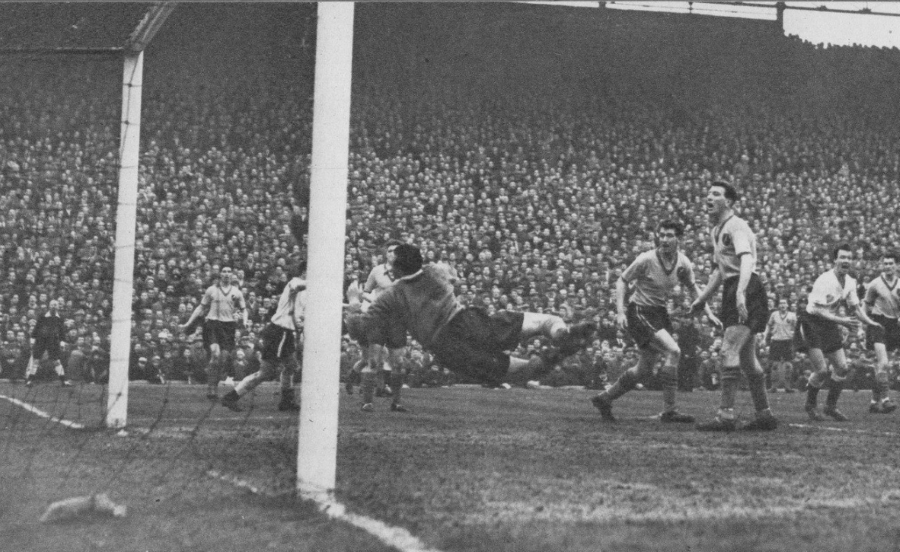 Today it’s the turn of Jim Davies, a friend of MyFootballWriter and one of our gang of regular commenters, who takes us on a little journey back to 1959.

When I first starting watching Norwich in the mid 1950s, they played in yellow shirts and black shorts and socks, and the kit stayed pretty much that from season to season.

We did have an away strip, but I don’t remember what it was, and I never saw us play in it. I think it was Chelsea who first broke away from the standard black or white shorts, and went for shorts in the same colour as the shirt.

The goalkeepers all seemed to wear a green jersey, and I do mean jersey. It was usually a woolen type material, with a roll-neck, and the outfield players shirts were cotton.

In those days, there were no substitutes, and the club pretty much had the first team and the reserves, and it was only in the event of an injury would you ever see one of the reserves making an appearance.

The reserves played in their own league and if one of the first-team got injured in a game so that they couldn’t continue, they played on with ten men.

If it was the goalkeeper who had to go off, one of the outfield players went in goal. (I seem to remember Glenn Hoddle going in goal for Spurs at Old Trafford when the keeper got hurt late in the game, but I think that was in the era of one substitute, and Spurs had already used theirs. Hoddle did well, and I don’t think he let one in).

Anyway, back to my reason for writing this piece. At this time of year, my thoughts always gravitate to 10th January 1959. I think even the younger readers will know the significance of that date.

It was the first time that we gained any sort of national recognition. Teams in Division 3 South, as we were then, were not expected to beat the mighty Manchester United, but with the aid of a pitch recently cleared of snow, and
Archie McCauley’s cunning cocktail of sherry and egg, which the team enjoyed (?), we did on that famous day.

We caught the nation’s imagination as we fought our way to the semifinal replay, but couldn’t quite make it over the line to Wembley.

I’ve had a grudge against Luton ever since.

The thought that came to me in the small hours of this morning was the changes since then. As I mentioned earlier, we had a first-team, and that was about it.

The numbers on the players back went from 2 to 11 (yes, there was no number on the keeper in those days). The positions were labelled, and indeed played, somewhat differently.

The two full-backs (numbers 2 and 3) played as full-backs, and hardly ever crossed the halfway line. The half-backs (4 to 6) played across the middle of the park, with the centre-half (5) staying pretty much in the middle, though occasionally dropping back in between the full-backs.

The forward line (7 – 11) consisted of two wingers, a centre -forward, and two inside-forwards, and that was pretty much how they played.

Around this time Walter Winterbottom, who was the England manager, was starting to play his W M formation, in which the centre-half did drop back to become a centre-back, and the other two half=backs closed in a bit more to link with the two inside-forwards, who dropped a bit deeper.

Now we have squad numbers running up into high double digits (haven’t seen one over 99 yet!), players names on the backs of their shirt, third and even fourth kits, and advertising on the shirts, not to mention multiple substitutes.

Players want to lay claim to a particular number in many cases, for reasons sometimes known only to them.

Life was simpler back then!

I can still list from memory the 1959 team, but I struggle now to remember teams from a couple of seasons ago.

Must be getting old.

Tottenham Hotspur have lost just one of their last 10 Premier League matches (7 Wins, 2 Draws) heading into their final game of the Season away to Norwich City at Carrow Road on Sunday

A draw would be enough to secure to Top 4 Finish

So many great moments with the Finns 🇫🇮 at Int’ls. But one in Norwich colours particularly springs to mind - his brace on 21/22 #PL final matchday 2-1 win to take them 19th 🔰😁