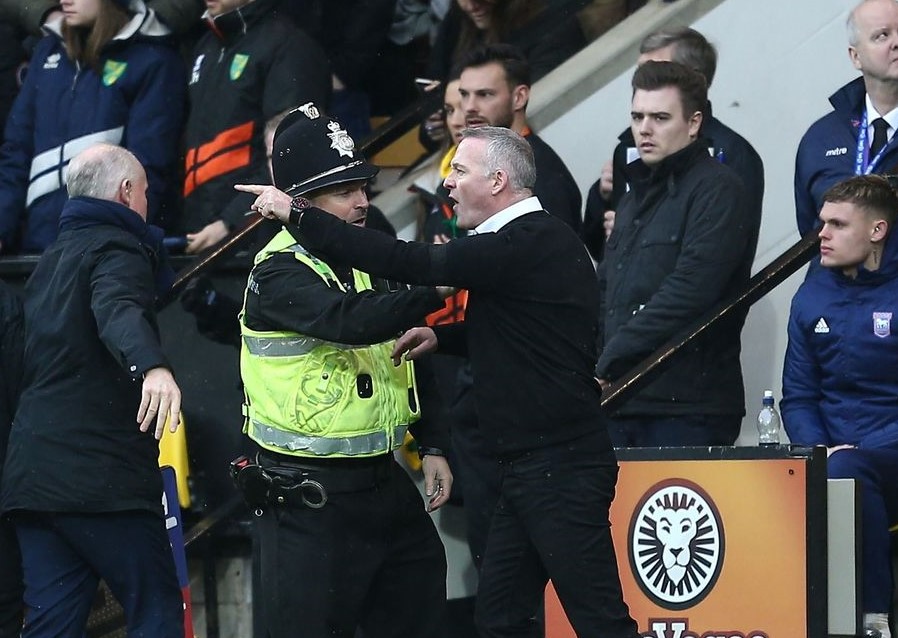 That these are weird, surreal times is clear. Things once considered fringe have now filtered into the mainstream, so hopefully it won’t come as too much of a surprise to read a piece about Ipswich Town on a site that is exclusively Norwich City.

Please bear with me.

I should loathe them of course and, believe me, there are times when they’re down there with Donald Trump and Nigel Farage in my imaginary order of merit, but I come from Halesworth and live in Lowestoft; both bleak hinterlands that sit the wrong side of the Norfolk/Suffolk border but which are closer to Norwich than Ipswich.

So I’ve grown up among those of a blue persuasion, went to school and college with them, played football with them, drank with them. Hell, I’ve even had proper, sensible, rational conversations with them.

One particular lowlight was a two-week stay in the south of France during France ’98 with four others, three of whom were Ipswich supporters. Imagine that. 1998. Back in the day when the bragging rights were, at best, shared. It was, trust me, a summer school of hard knocks.

And on my mother’s side of the family I have uncles, aunties and cousins who turned south instead of north; all of whom are – wait for it – really nice people.

So, forgive me if my venom levels occasionally drop from full-on apoplexy to mere indifference, although you (and they) will be pleased to learn that even in their current state it never gets close to sympathy. Empathy maybe, but never sympathy.

I was there, remember, in December 2008 when that “blue corner of Carrow Road that’s forever Ipswich” delighted in reminding us, while we were minus a pot to pi$$ in, that with a new owner on board in the form Marcus Evans they were “f#!%ing loaded”(we won 2-0 btw).

That they’re anything but, and never have been, was of little consolation at the time as we watched those crumpled fivers being waved aloft. Back then I confess to genuinely feeling a little envious.

There was also that time when their first CEO under Evans – a gent by the name of Simon Clegg – referred to us as “a small club to the north of us that has just been relegated”. That one irked too, even if the last five words of that sentence were factually correct.

And while a Norwich City voice for The Metro I was understandably (and perhaps deservedly) on the receiving end of some industrial-scale abuse when previewing and reporting on local derbies, specifically, as I recall, in the lead-up to the playoff semi-final. Not for my mother’s eyes.

As a result I should be glorying in every second of their third tier travails.

I guess part of it pertains to there but for the grace of God go I (or we), but there is also the simple fact of missing the rivalry.

I mean, I don’t miss Derby Day itself or even the days leading up to it – I’ve come to dread it in fact, even more so as our dominance continues – but a local rivalry isn’t really a local rivalry when you don’t even play each other.

As someone who painfully remembers the Arnold Muhren/Frans Thijssen era, a decade of City dominance was obviously more than welcome but that sheen has started to fade.

On that note, I guess, before the inevitable arm wresting begins, the ground rules are worth getting out of the way:

The last one was an opinion rather than a fact, but I don’t think it’s unreasonable to perceive both to be in that gaggle of teams who deem the Premier League their ‘rightful place’ without it ever actually being the case.

But, based on all of the above, Town fans are undoubtedly being short-changed. Not necessarily in the way Marcus Evans finances the club – as I understand it, he underwrites annual losses in the way Ellis Short did at Sunderland – but certainly in the way Evans and his entourage manage the club.

Their decision-making in picking a manager, from Roy Keane through to Paul Lambert, has been questionable to say the least, with only Mick McCarthy, in his own inimitable way, getting them into the Championship playoffs.

Lambert, of course, was a controversial choice in the first place given his limited achievements since departing City, but not only did his first-part season in charge earn him a special place in the hearts of the Town faithful, it also went on, despite relegation and an indifferent start to 2019-20, to earn him an improved contract that tied him to the club until 2025.

Yet, despite Lambert having at his disposal a squad that, on paper, looks good enough to compete at the top end of League One and him now having support in the form of a Lee O’Neill (‘General Manager of Football Operations’), they currently sit eighth and have developed an unhealthy trait of generally only succeeding against teams from the lower half of the table.

In early December, Brenner Woolley – BBC Radio Suffolk’s Chris Goreham – concluded an afternoon’s commentary with a stinging… “The boos are back at Britain’s most miserable football club.”

Few argued. Least of all the Town fans.

A cursory glance at TWTD – Town’s most prominent messageboard – and the #ITFC hashtag after a game, suggests that few see things improving anytime soon. Many are calling for a change of manager, even more for a change in ownership, with most agreeing that the current malaise is set to continue for the foreseeable.

The perceived logjam caused by Evans inability/refusal to find a new owner and also his insistence that Lambert remains the man for the job – even amidst rumours of the ruddy-faced one losing the respect of the players – are seen by Town fans as barriers to progress.

But from the outside looking in – and I’m prepared for Town fans to tell me to mind my own business – the route to happier days may not be as far away as some think.

And they will come back. In the cyclical world of football they will rise again and (sorry all) they will also regain, at some point, the East Anglian bragging rights.

Sorry, but they will.

Equally, I don’t think it needs a footballing sage to see that it will probably need Lambert to exit stage left before the dark clouds around Portman Road can be lifted. For Evans that would be an easy win.

Such is the anti-Lambert feeling, there appears almost no way out of this hole for the mumbler extraordinaire and I get the feeling that almost anyone who’s not called Paul Lambert would get more of a tune out of their current squad.

Town fans may tell me otherwise, but from the outside looking in and without knowing the intricacies of their playing staff, it just feels like a new voice, almost any voice, would trigger a reaction.

And that may just be enough to see them get into the League One playoffs. From there, anything is possible,

The issue of Evans and his ownership is a trickier one, of which there is no easy win, but, whether we like it or not, that word history may just come into play at some point when prospective new owners are being given the tour.

Who knows when, but they will be back.

And when they are, I’ll probably hate it.