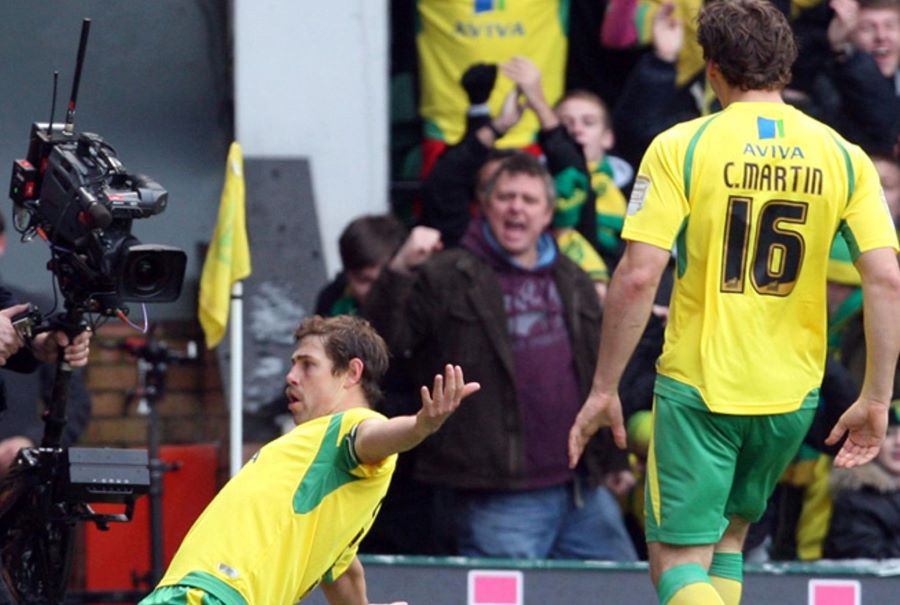 I decided the best way to introduce myself was to tell you about the matches that have made my career as a Norwich City supporter to date, starting with the double promotions of 2010 and 2011, leading all the way up to now. With such a great task at hand, I enlisted the help of six fans to tell the stories with me. Today I revisit the first 90 minutes of club football I properly remember, City’s 4-1 win over Ipswich in November 2010. I was joined by the king of MFW himself, Gary Gowers, to discuss the game.

As a Norwich City supporter from outside Norfolk, attempting to pinpoint exactly when I became a fan is more complicated than finding the ticket for the first match I attended. Getting to home games is a difficulty at the best of times, let alone when I was a small, problematic and easily bored child whose ability to anger my parents was at its peak on long car journeys.

The memory I tend to trace it back to is the Christmas of 2009, a couple of weeks after I had started to watch Match of the Day, and when football had started to come into my consciousness. I remember seeing my great-auntie read the PinkUn, spotting pictures of footballers in bright yellow and green and asking what team that was. ‘It’s Norwidge, a’ course’ was the response I received, and having been told that’s who we all supported, I never looked back.

I saw highlights of games, watched the Football League Show on iPlayer and attended Carrow Road for a friendly against Newcastle in the summer of 2010, but my earliest memory of really caring was my first East Anglian derby.

It was in the days when BBC would occasionally show Championship matches, and this one was selected for broadcast at midday on Sunday the 28th of November 2010. I remember being a bag of nerves before the game, something a Norwich fan can barely relate to going into modern derbies.

“It was back in the early Marcus Evans/Roy Keane era, so we had no sense of superiority over the dimwits”, recalls Gary. “We had, in fact, been beaten by them last time out, in April 2009. They were the holders of the bragging rights – imagine that!”.

It feels strange to say given all that’s happened since, but the Canaries were going into the game as underdogs, despite being in the play-off mix while Ipswich struggled in mid-table.

Blues fans were as smug about our spell in League One as we are about their current predicament, and saw this as a chance to turn around a poor start to a season with one big result.

Gary’s memories of the big day start with its trying weather, an element I was safe from sat in my living room.

“It was cold, that much I can still vividly recall, as I was forced into buying emergency headgear from the stall just over Carrow Bridge after making the baldie’s schoolboy error of forgetting to take a hat!”

I wonder just how much that particular stall has made from hatless bald men over the years- the prevalence of home-knitted bobble hats at Carrow Road is starting to make sense to me.

A convenient upshot of the date of the game was its perfect timing regarding Movember. At the peak of its popularity, the charity moustache-growing challenge had been accepted by the large majority of the Norwich City squad, captain Grant Holt’s the most impressive of them all.

“If I had to narrow the day down to the one most memorable thing it would be Holty’s tache” says Gary. It wasn’t just the tache that was impressive. “The game itself was the Holty show – a masterclass in leading the line and bullying the opposition’s defence – and the great man was as unplayable that day as I ever saw him”.

The first Town player Holt proceeded to impressively bully was centre-back Darren O’Dea, who was punished by the big number 9 when wanting too long to control a long-ball forward. Once Holty had stolen the ball there was no stopping him.

A brief blip in proceedings saw Damien Delaney find an equaliser for the hosts, but Holt wrestled back the lead with interest. Two minutes after he had slotted a Henri Lansbury through-ball to give his side the lead (celebrating with a large microphone to triple the moustache in size), he put Delaney in real trouble.

“The key moment was Holty squeezing every last drop out of some contact with Delaney, the Town defender seeing red for his misdemeanour”. The decision to send the Ipswich player off was certainly a close call, as confirmed by a colleague of Gary’s.

“I worked with the chap who was the referee assessor that day and he told me in the weeks that followed that in his debrief with Keith Hill (the ref), the decision was ‘50/50, one that you could argue either way’, so good ol’ Grant for making the most of it!”

It is my firm belief that even up against eleven men for the entirety of that match City would’ve been victorious. What the red card did was allow City fans to comfortably enjoy the second half of their first derby-day joy in two years.

Holt completed the hat-trick before Wes Hoolahan got in on the act with a delightful chip, setting up a wave of momentum which carried Norwich all the way back up to the Premier League after six years in the wilderness.

I’m not claiming to be a good omen, but that was the first East Anglian derby I watched, and City haven’t lost one since.

Let’s hope they can keep that run going, and for a lifetime of bragging rights for me!