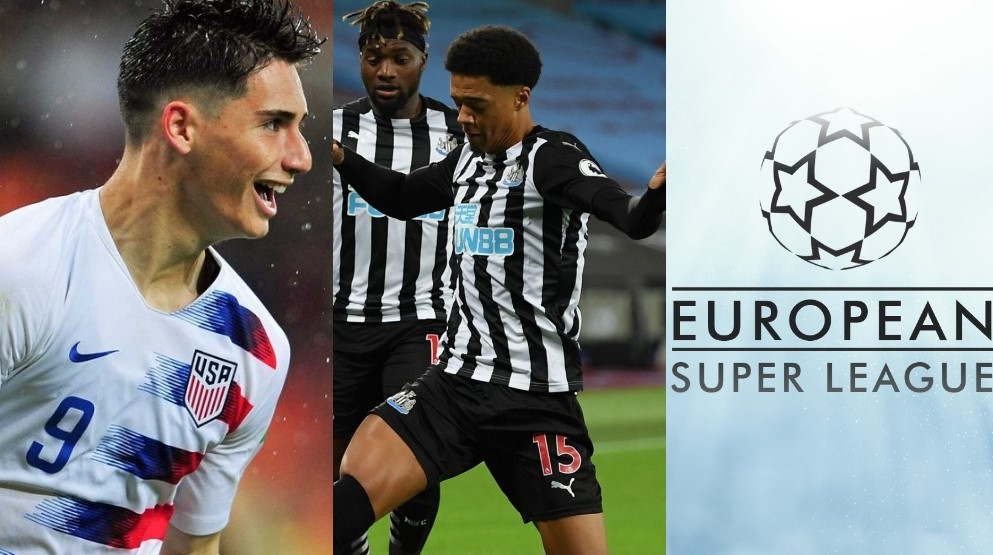 First came the sight of Jamal Lewis, flailing and failing in Newcastle’s humiliation. Then came the news that Norwich City have brought USA striker Sebastian Soto to England at last. And, finally, there were accounts of the threat of a breakaway European super-league.

Three disparate sets of circumstances, they coalesce to provide an understanding of City’s attempt to get back into the Premier League and make a better fist of staying there.

Lewis looked forlorn, lost even, as Newcastle were swatted aside by Arsenal and the inescapable conclusion, surely, was that Stuart Webber did really well to get £15 million for him in the summer.

Lewis is a fine player, no question, but there was one City game in the Premier League that exposed a frailty, I thought.

At Burnley in September, Lewis scuffed an attempted pass. It drew some heckles from home supporters on his side of the pitch. He made another fluff soon after and those supporters sensed blood. Ashley Barnes and Jeff Hendrick closed Lewis down every time he was on the ball (it’s called a “high press” now), the supporters bayed, and Lewis wilted. He became unsure, not keen to receive the ball, hesitant with it. He’d probably never experienced that before: a sudden loss of self-belief.

It was temporary. He recovered in the second half and did well enough in the rest of that difficult season to command that big fee. But he went to a club whose style and prospects did not suit him. You would have thought Newcastle themselves might have worked that out, and yet they signed that huge cheque.

Ben Godfrey, in contrast, is fitting in so snuggly at Everton – in a position (left-back) where we never used him – that the add-ons in his £20m move to Mersyside could well nudge the total Norwich receive to £25m.

Yet City are better defensively without Godfrey, not least because Ben Gibson has been an upgrade in the position in which we used Godfrey (centre-back). He complements (and compliments) Grant Hanley; together they are part of the reason we do not concede from set-pieces and no longer look likely to do so. Gibson also plays penetrative passes when he advances.

So there is the first of the three facets of the Webber masterplan I’ve been thinking about: if City sell any of their best players, they make sure they get top dollar and strive to use the vacancy in the squad as an opportunity to improve.

The arrival on our shores of Soto illustrates another part of the plan: there is a constant, complex recruitment process going on.

Soto was picked up in the summer when his Hannover contract expired. There was little chance of getting a work permit for him then, and with Brexit about to further complicate the paperwork, it seemed quite a punt by Norwich to give a three-year contract to a 20-year-old forward who might never be allowed to play for them.

But City signed him anyway, farmed him out on loan to Telstar in the Dutch second tier … and rubbed their hands as he scored goals and earned a call-up to the USA senior team.

Michael Bailey reports on the Athletic website that it was progress with the work permit that prompted City to recall him from Telstar, that the permit has now been granted, but that City will probably send him out on loan somewhere else after he has been at Colney a short while for Daniel Farke to have a proper, close-up look at him.

Nobody knows yet whether Soto will be another Teemu Pukki or even another Dennis Srbeny. Or a Josip Drmić.

He might be another Sean Raggett: the defender who was one of the first arrivals of the Webber-Farke era but was loaned back to Lincoln. When City finally put him in a yellow shirt, it was for just two, very brief appearances as a substitute. He was on the pitch for a total of nine minutes, plus whatever stoppage time was added – let’s be generous and say he had about a quarter of an hour as a City defender. After that he was sent on loan to Rotherham and then Portsmouth. Eventually he joined Portsmouth. On a free.

Here’s another case study: City paid £3.5m to Coventry for left back Sam McCallum in last January. We were in the Prem (you know, the season when detractors say we didn’t invest in the team) and part of the deal was that McCallum was loaned him back to Coventry for the rest of that campaign.

Covid struck. Coventry were promoted from League One without finishing the season. McCallum came back to Norwich and played for us in the EFL cup defeat at Luton at the start of this season – and then was sent back to Coventry on loan.

When Norwich knocked Coventry out of the FA Cup at the start of January, Midlands-based journalists asked Herr Farke about the McCallum situation. Daniel said lots of nice things about the player’s ability, but added that, “Yeah, so, yeah… he most probably needs to work on his defensive aspects”. McCallum will stay at Coventry on loan until the end of the season at least.

Another arrival a year ago, in that January in the Premier League, was Melvin Sitti, a defensive midfielder from Sochaux. He’s on loan to Waasland-Beveren, but they are struggling in Belgium’s top tier and he has had hamstring problems.

There are plenty of City fans (probably including the bloke on Facebook who thought the dominant performance against Bristol City involved too much “faffing about”) who regard Raggett, Sitti, McCallum and others who haven’t got into our first team as proof that our club is led by donkeys.

It will shock nobody that I disagree.

Raggett looked good enough for us to sign in the summer of 2017. But now he’s playing for Portsmouth in League One and we’ve received loan fees and partial help with his wages in the interim while he found his level and we concluded it wasn’t at the top of the Championship.

Covid was an unseen enemy last January, but it is the all too visible opponent which now is driving Europe’s elite clubs towards a breakaway league. Covid has caused such an unexpected hit to finances that many of the super-rich clubs have taken vast, expensive loans.

That is why they have renewed enthusiasm about breaking away. There is renewed attraction in the idea of a closed shop competition in which they would always compete and from which they could pocket even more than they do now.

FIFA and UEFA are sufficiently rattled to have issued a joint warning. If the clubs join an unsanctioned competition, their players will be banned from the sanctioned international competitions, including the World Cup.

But we know how this ends. It is similar to what happened before the formation of the Premier League, and identical to what occurred before the European Cup became the Champions League. The clubs talked about breaking away, and eventually the authorities bought them off: they gave them a lot of what they wanted to keep them in their organisations.

So we can expect the Champions League to “evolve” into something else and for the top clubs in England to become substantially richer.

The Premier League, as an organisation, will fight to remain sustainable, but if the top six or eight pull even further away from the rest there will be pressure from the rest for another reorganisation of the English leagues structure.

Changes are imminent, I believe. The current broadcasting and sponsorship deals for the Champions League and Europa League expire in 2024 and clubs will make their big push (or putsch) before then.

We cannot begin to guess how any of this would affect Norwich, but we do know, already, that our club has withstood the Covid storm better than most and that, remarkably, we have been able to regroup, rebuild, and “go again”.

But I don’t suppose many fans have done the sums.

The club’s accounts for last season, published in November, had by law to include notes about any exceptional spending after the period dealt with in those accounts. So we learned that the purchases of Jordan Hugill, Keiran Dowell, and the loan fees for Ollie Skipp, Gibson and Xavi Quintilla amounted to £6.1m and involved a commitment to another £4.6m depending on appearances and so on.

Since the accounts were released, we’ve spent another £2m on Przemyslaw Placheta and £750K on Jacob Sorensen.

So I make that’s £13.4m, without taking into account any fee to Sunderland for Bali Mumba or the loan fee to PAOK for our latest acquisition: Dimitris Giannoulis.

If we go up, we have to pay £8m for Gibson, and as yet unknown sums for Quintilla and Giannoulis. The latter two wouldn’t be less than £2m a head. So that’s a minimum of £12m already committed if we go up.

The too much “faffing about” bloke will not bother with facts, I know. He decided last July, without much thought, that going up will be a waste of time because the board/Delia “won’t invest”.

But when I fret about Europe’s super clubs, I think about Jamal floundering and Soto arriving and am greatly reassured about the club in the fine city.