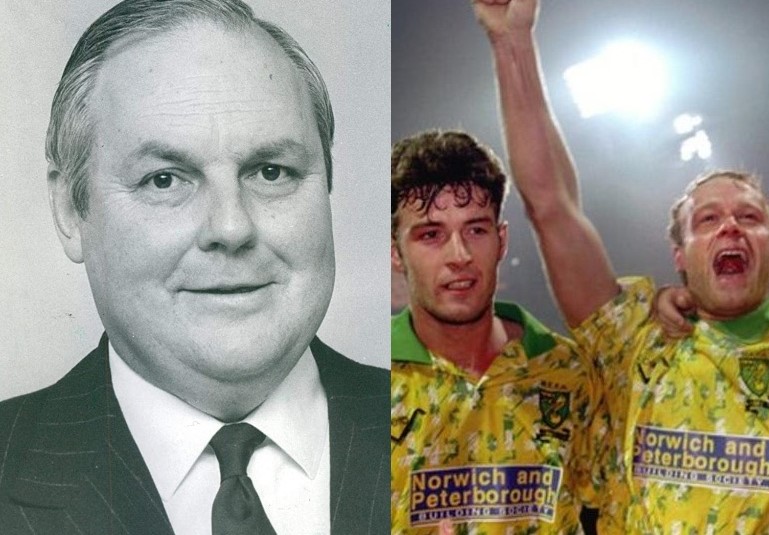 You may find at this moment your larynx start to spasm as it begins to form some spiky syllables of disagreement but, for the time being, put a sock in it and bear with me. Please. Allow me to present the Case for Chase…

Robert Chase – more ‘a Doctor in the House’ rather than ‘that doctor from House’ – joined Norwich City’s board in 1982. Three years later he took over as chairman from legendary old-schoolian Sir Arthur South. Although not a majority shareholder, Chase effectively ‘owned’ and ran the club for more than a decade – and during his tenure City enjoyed the greatest footballing period in their history.

In 1987 Norwich City finished fifth in the top division (now the Premier League). Imagine that?

Two years later he did it again, this time finishing fourth.

And in 1993 he finished third! Incredible.

Only the political repercussions of the Heysel tragedy in 1985, and England-wide European football ban that followed, prevented Norwich from creating their own European legacy during this period.

The argument that City suffered because Chase ‘sold all the best players’ doesn’t really hold water because… well, look at the previous few paragraphs. No other chairman or owner has got close to those achievements, before or since. Not. Even. Close.

On the player sales front (see list below), it could be argued Chase maintained City’s financial stability by making it the club self-sustainable which necessitated regular player sales (ringing any bells yet?) And his record on buying players young and cheap and selling them later in their careers is pretty darned good (those little danglers should be clanging loudly by now). In fact that comes across as shrewd. Webber-esque, in fact. (Ding, dong).

Added to Chase’s financial acuity and reinforcing his long-term commitment to the club’s future was the foresight to buy up a whole stack of land round Carrow Road rather than waste it on another Drazen Musinic, Dean Coney, or Darren Beckford (three rare transfer failures). He even built a cute little main stand to replace the burned-down one. No doubt if he’d stayed longer he would have got round to building a proper one.

So, financial acuity, club success, creating an increased national and international profile for the club, upgrading the facilities, and making City a better club to support… where’s the problem?

(PS. In fact, I believe the only reason Big Bad Bob left in 1996 wasn’t because of the fan protests or his perceived unpopularity, it was because the Bosman Ruling happened just six months prior to his exit and I believe he thought that would seriously impact his modus operandi in buying players cheap and selling them high, and that would seriously threaten the club’s self-sustainability model. There you are – from The Boy Sadler – an exclusive!)

(PPS. Also a big shout out to the inestimable Geoffrey Watling who magnanimously and bravely stepped into the mire to plug the serious financial gap left when Mr Chase removed himself from the club. Without Mr Watling’s efforts at that time there would be no club left to support.)

The list of significant transfer transactions during Robert Chase’s tenure

(NB. To give you a better idea what these figures would be equivalent to in today’s inflated transfer market, try multiplying the amounts by somewhere between 10 and 20 times. That’s the sort of money we’d be talking nowadays.)

SOLD: Free transfer to Aarhus in 1992

AND THE ONE THAT GOT AWAY…