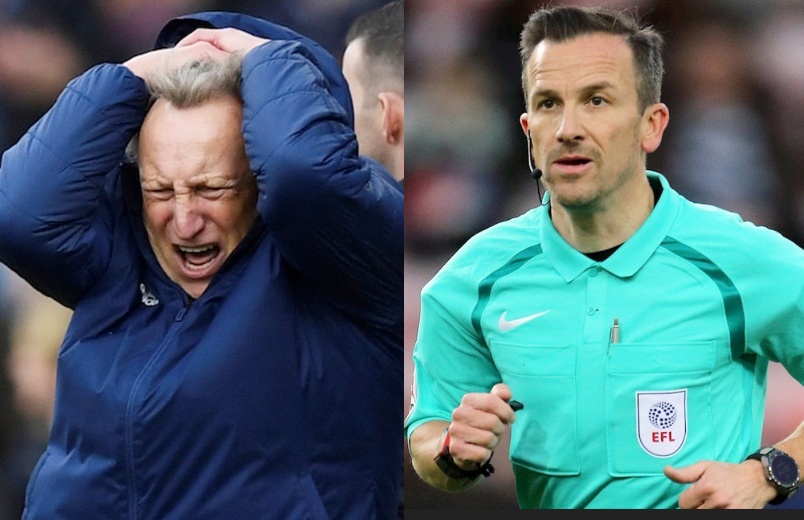 The thing about Jose Mourinho is that you know his intention is to make it all about him. With Neil Warnock I’m never quite sure.

Mourinho does it expertly for all manner of reasons – to take the pressure off his players and to inflate his own ego among them – but Colin… who knows.

What I do know is that cheeky Yorkshire chappie persona that gets turned on for the TV interviews belies the brooding, seething, leader-of-the-playground-bullies act that kicks in when he hits the technical area.

What you hope for, to bring it back to football, is to have a referee who isn’t intimidated by the leader of said gang and his cohorts, and who doesn’t allow their menacing presence in the away dugout to effectively referee by proxy.

Instead we had Keith Stroud.

That’s not to say City dropped two points yesterday because of Colin being Colin or Stroud having the mental fortitude of Indecisive Dave, but it did make for a bit of an unedifying spectacle, not that it came as a surprise.

Our Neil has this uncanny trait of leaving a bitter aftertaste.

But in his capacity of a football manager, as opposed to provocateur extraordinaire, he did a good job yesterday. He even came close to what Sky’s Don Goodman described as “doing a number on Norwich”, although even Colin himself would admit that to have done that effectively would have meant Boro winning the game.

To have played against ten men for half and hour and still draw is maybe “doing a number” in Goodman world but to most Boro fans it will have been seen as a missed opportunity.

There’s no arguing though around how effective Boro were in inhibiting City’s ebb and flow and, aside from our rock-solid defending, it was an afternoon where the misfires far outnumbered the Farkeball moments.

Warnock’s plan to stifle contained several different elements but began by him conceding that to do what he wanted to do would mean allowing Grant Hanley and Ben Gibson time on the ball.

In Hanley’s case it was considered a risk worth taking as, for all his technical improvements of late, he’s still unlikely to stride out of defence with the ball and hit a killer pass. To allow Gibson to do the same came with a greater element of risk, but was clearly considered, and proved to be, a risk worth taking.

More important to Warnock was to deny City space to work those mesmerizing triangles and to deny them (sorry) space between the lines.

In addition, the plan to deprive Todd Cantwell and Emi Buendia time and room in which to create was achieved by the old school notion of man-to-man marking; in Cantwell’s case by another agent provocateur, Darnell Fisher, who, until yesterday lunchtime, I hadn’t realised had made the move to Teesside.

It was Fisher’s second Carrow Road appearance of the season; his first in the white of Preston was equally controversial and downright infuriating.

Mario Vrancic wasn’t afforded the man-to-man treatment but only once – in the first when he arguably should have scored – did he make serious inroads into the Boro defence. For most of the game, along with Teemu Pukki, he was the subject of a Teesside stranglehold, expertly led by Dael Fry, Paddy McNair and Jonny Howson.

And then, of course, there were City’s full-backs, usually the source, often the key source, of our attacking impetus; both denied the chance to join in and pressed sufficiently as to deny them the chance to deploy as extra attackers.

For Dimitris Giannoulis this was in-at-the-deep-end stuff and there must have been a ‘what the hell have I done’ moment in those opening exchanges as the tackles flew in in a way unique to the Championship. But he stood up to the task and even found time and space to show off his attacking instincts in the second half.

Those who chose to berate him during those opening 45 are probably he same folk who baulked at Vrancic in his opening few months at the club and deemed Daniel Farke not up to the job in season one. To judge Giannoulis on one afternoon of Warnock-ball was harsh.

And besides, on the other side, Max had one of his own poorest afternoons of the season, certainly in an attacking sense. That he rarely made it into the final third, let alone the by-line, speaks volumes of the threat recognised by Warnock and the good job Boro did in stifling his progress.

The sucker punch (literally) was that he took one in the face from Duncan Watmore late on; one that’s reportedly broken his nose, even though after two slow-motion replays, Goodman still deemed it an accidental clash of heads.

It was that sort of afternoon.

And then, of course, there’s Emi.

After expressing my Twitter disgust at Mr Stroud’s decision to give him a second yellow for the challenge on George Saville – “Bit daft but not even a foul. Tried to pull out” – I was informed that regardless of intent or the fact he did everything he could not to foul Saville, he was still out of control and was therefore rightfully booked.

But come on. The only real danger was to Saville’s vocal chords after his banshee-like scream, which was always going to come regardless of the level of contact or pain. Job done. Smiles all round on the Boro bench.

Was it a challenge Emi needed to make? No, of course not.

Did he intend to hurt Saville? No of course not.

Did he, by the letter of the law, deserve to be booked? Possibly.

Are there 20+ of those tackles in every game of football? Almost certainly.

But, regardless, we are now without Buendia for two crucial games and it’s no coincidence that’s it’s always Emi who gets himself in these type of scrapes. Without wanting to delve too deeply into the book of platitudes, he’s one who plays on the edge and that edge is part of what makes him such a brilliant player. Take that away and you potentially see a slightly less effective performer.

It’s, maybe, also why the big boys have yet to dive in.

Either way, I had a modicum of sympathy for him yesterday. Perhaps I’m just soft… and biased.

So, a disappointing afternoon, one in which City never really fired even when it was 11 v 11, but to have played with ten for half an hour and still pick up a point is far from the end of the world.

If anyone thought it was going to be plain sailing from hereon in they were always destined for disappointment. Yesterday was a tough old day and there will be several more between now and May.

A big week awaits, but there are still 23 managers who would happily swap positions with Daniel Farke. Including our Colin.