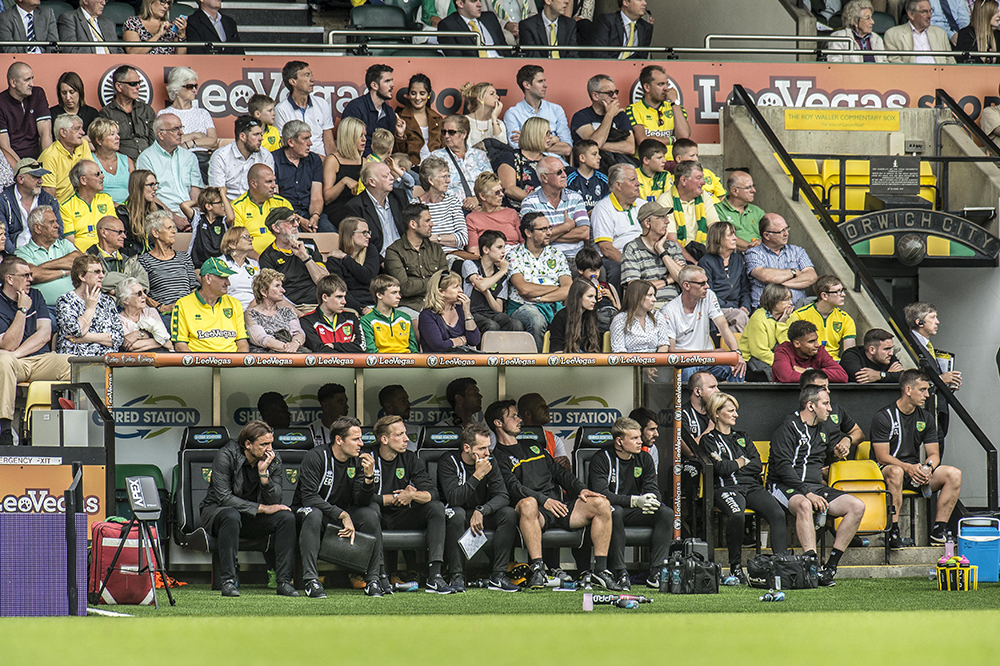 And the wins just keep on coming.

The myth, not helped by people like me, that City sometimes buckle when opponents put it up ’em should no longer even be a thing.

Wycombe did everything, literally everything, to try and do a Jonesy on us but, despite a valiant attempt, came up short.

Not only did they huff and puff, they also tripped, hacked, scythed and hoofed, but still were unable to disrupt the City flow or find a way past Tim Krul.

Gareth Ainsworth may (did) point to a legitimate penalty shout when Krul’s flailing arm ended, inexplicably, in a City free-kick, or when the unfortunate Josh Knight deflected Teemu Pukki’s shot past David Stockdale, but if navel-gazing is the Wycombe’s boss’s thing – and judging by his attire, I suspect it is – then he’ll know.

He’ll know that despite his players giving him everything and despite him and his management team trying everything in the handbook plus a few things that weren’t, quality trumped muscle and endeavour.

And City march on.

Sky, of course, are going big on ‘top vs second in Championship’ even though they’ve relegated said encounter to the 5:30 pm graveyard slot, but City’s fight is no longer with Brentford.

Those weekend defeats for Watford and Swansea have opened up a ten-point gap between City and the play-off places – a gap the Hornets and Swansea have to close with an ever-diminishing number of games – and while I’d not expect any club sources to speak of it, it’s going to take an industrial scale implosion to blow it from here.

One of Brentford or Forest proportions. But… said cock-ups have occurred before and West Brom gave it a good go as recently as last season.

In City’s favour though is a mentality and composure far removed from the harum-scarum but totally joyous run-in of 2018-19. While it becomes tiresome as a reference point, the comparison is inevitable and remains a good barometer of the extra maturity and nous that’s now there for all to see.

The majority of these players lived through that run-in, as did all of the management team, so hardly any of this is new. The expectation levels are obviously enhanced but are currently being managed expertly on that very basis. Been there, done it.

The pitfalls and bumps in the road have been negotiated before.

And while many of the key personnel are the same, the method has been tweaked. The base is more solid, the risks are managed more carefully, and hopes and dreams have been replaced by an irrepressible belief.

In 2018-19 there was awe and wonder. We were wide-eyed. It literally was wonderful. But this time there is what Sky Sport’s finest would describe as “a crisp efficiency about Norwich City right now”.

Sky Sport’s finest would be right.

There will be some bumps in the road in the next 13 games and it wouldn’t be Norwich City if things didn’t get a little hairy at times, but yesterday’s win – probably above all the others – was a timely reminder to us all that if there is any panicking to be done, that falls on us.

Team Farke and the players will keep churning them out, not too high, not too low, until such time when we can all stop poring over the results and fixtures of the chasing pack.

And until then, we just do what Jonesy told us…